Create a Powerful Monster
Submitted by GipMedia — 2 minutes, 42 seconds before the deadline
Add to collection 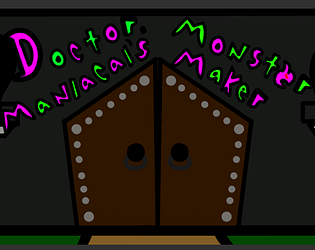 The artstyle gives a bit of a nostalgic flash game vibe. The theme is pretty good. Like the idea of combining stuff. Would be nice if there were more maps. Overall a good game.

also check out my game if ya have da time ;)

Interesting concept, I like the idea to build your character and good job on drawing all art yourself. I think if the level was a little bigger and perhaps had more spawn points for enemies it could be even more fun.

I had fun playing it, well done.

Would love to get your feedback on my game as well.

Glad you liked it! I'll certainly check yours out!

I really liked the hand-drawn feel to the art style! The concept was also quite good, and I liked the visual effect of showing what upgrades you have. I enjoyed the arena-like feel. The enemies could have more variety, but overall this is great work!

This was such a pleasant and involved game! I love the animated cartoon vibe of it and the mad scientist was a fun character that had a surprising amount of life to them The soundtrack is also a great contribution. I had a few issues with the attack system feeling responsive but overall fantastic!

Fun concept! I included it in my Blackthornprod GAME JAM #3 compilation video series!

Interesting idea, customization it's allways fun, the music and the sound FX are good, the visuals suit the game, and adding a little bit of stroy explain the theme! Good Job!

Wow, it's so cool how you can customize your character and choose different ones to play with. I haven't seen that before.

I did notice when I jumped on the knight in the right corner, I was trapped and could not move anymore, or jump off.

This game had great art, it was fun, and a great mechanic, definitely 5 stars! :)

Submitted
Maze of the Neglected Triangle
LikeReply
GipMediaDeveloper1 year ago

Thanks so much, so glad you liked it! And yeah, that ability was slightly glitchy at times, I'll likely work on that!!

I loved the artstyle and the music :D

I loved the artstyle and the music :D

This is one is tough for me. I read your comments on the itch page and it looked like you were going with something different in that you can create this beast of a monster that is really powerful/fast but only where it has the least amount of upgrade. Then the game starts nice a wacky with this Frankenstein doctor letting me make my own monster (nice touch by the way) but then gameplay stars and I didn't really get the feeling that I was necessarily and I figured "if I'm going to get more sluggish in the later parts of the game, then this is going to gel difficulty really quickly" I also didn't understand if it was a "survive however long you can" or if there was a wave of enemy and at the end I could evolve my beast more.  It was just taking too long just moving left and right clicking on the mouse waiting for something else to happen. However, I do appreciate the level of details in giving it a story, an animated npc, and the ability to customize your own beast. Nicely done on that part

That's fair! Thanks so much for the criticism, that's how improvements happen!

Really great idea and execution with mixing parts to different ends, was fun to think what would come out from the machine each time around.

However in my first go I seemed to have made some bad choices... After the first round I selected something which seemingly gave me no attack. I recall it stated to "attack from the skies" but each time I attempted that I would get stuck on top of the enemy sprite, unable to move.

Also felt that it would be cool to have a slightly clearer tutorial and a more varied arena/enemy type, but of course those are the limitations imposed by a jam!

I'd be excited to see how this idea would come out if you had some more time to get into those details :)

That ability is likely the most glitchy - if you try to use it while touching one of the platforms on the left or right then there are sometimes issues with getting stuck. Sorry that happened to ya! I was definitely hoping to get more into the enemy design, but in the end I was focusing a very large amount on the creation process and ran out of time for more than the basic one - but thanks so much for the feedback!

One of the best games ive played yet. Very good Menu and animations. If the player had more particles it would be perfect

That was some great design. Mixing and matching different monsters was a fun experience. Loved your idea!

Fun little game! Really enjoyed your hand-drawn art style and spooky SFX/music. It might've just been me, but I found it a bit tricky to know when I selected enough pieces to move forward. I eventually saw that it highlighted selected parts, but I didn't notice that at first. Once I finally caught on, I was impressed with all the combinations you put together in such a short time! Very cool. I died nearly instantly by the creation I made, haha! Overall, great work though!

Thanks for playing - the WebGL had issues with the lighting, so it wasn't as strong of a highlight as I had hoped! Glad you figured it out tho!

This game is really fun. I like the selection of monster parts.

This was really cool, I loved the selection part! Unique and has some potential to be a great game if you keep working on it after the jam =)