The Eyes of Doom-MDView game page

Side Scrolling shooter.
Submitted by kakoeimon (@kakoeimon) — 2 hours, 33 minutes before the deadline
Add to collection 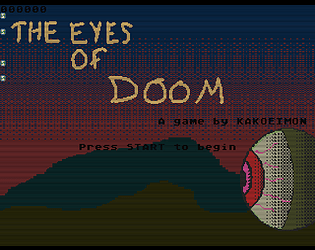 The Eyes of Doom-MD's itch.io page

Lets go to the grindhouseSubmitted1 year ago(+1)

Oozes cool i enjoyed it

Submitted
People Made From People
LikeReply
kakoeimonDeveloper1 year ago

Did you beat it?

The game really hits you with a cool aesthetic, but my immediate experience was kind of interrupted by the fact I had no idea what to do... a little keyboard mashing later I figured out A was shoot--so it could have been nice to include a tutorial or clear prompt for the controls before starting.

I liked the way the weapon shot but like many of the others I found myself mainly holding it down instead of really thinking about using that spread mechanic as it just seemed easier. Perhaps integrating a weapon overheat mechanic could help that become more of a thing.

Furthermore, I felt there was a bit of a lack of progression with my few tries always yielding waves upon waves of similar enemies and placements. But perhaps that's just me not getting far enough... haha.

Either way you've got a nice eye for a cool aesthetic so I look forward to seeing where you take that next!

There was a control paragraph in the discription of the game, but for sure an in game tutorial would had been great. I just lefted this for the end but when the time came I just created a video trailer

Also cause this runs through an emulator I hoped that the keys will had been easier to find out.

I was thinking to add a meter in the begining but then I got the idea that you will get smaller, so I used this as meter.

Yes the enemies are only 3 in kind and a boss. I was out of time to experiment with more enemies and I was very afraid that I will hit some limits of the embended enviroment of Mega Drive / Genesis before I start the creation of the stage. But even the way to get the data inside took me more time from what I was planning so left the experimentation aside to rush and finish the game.

Cool game. I liked the music and sounds. It's quite hard (I'm not very good at most games So, maybe it's actually quite easy.).

I am a bad shoot em up player too, it took me more time from what I thought to be able to reach the boss and create a video for the game.

Fun game. I found that if I just hold A and stay small it's much easier to survive as the fire rate and speed are fast enough to over compensate for the lack of range. Great work! Keep it up!

Yes the fire rate is high to allow you to survive but you will never get a high score this way.

It’s a very interesting game. At first I was a bit overwhelmed by the control. A tutorial would be helpful. I really like the retro theme. And the music goes very well with it. Generally the sound design was consistent. The theme idea with, the less you shoot, the more balls you could shoot  and the bigger the player was, I really like. What I also found very cool are the enemies patterns when they attack you. As I said, a short introduction would be really nice at the beginning, but otherwise a very solid and polished game.

Submitted
The Rise of the stone Hero
LikeReply
kakoeimonDeveloper2 years ago

Yes a tutorial would had been a nice addition, I took the decision early on to leave this for the end and in the end I just made a gameplay video trailer.

The music is a little off putting but it does match the visuals and the visuals are solid. The idea that the less you fire the more bullets your next shot will have (maybe even more powerful?) is interesting but with all the chaos going around you is easier just to continually shoot and dodge rather than pace your firing. It works best when the screen is cleared and then one enemy appears. Almost like a "special" attack

Thanks for playing and for the criticism.

You may find this strange but the first thing I created was the music and I used it as an inspiration for the rest of the game, even the idea for the mechanic came this way.

The yellow power ups with the little bullets inside will increase the fire rate and the recharge rate, the player must find a tempo between fire press and release, but near the end of the stage before the boss I wanted to force the player to become small and to try to dodge the chaos. Probably I overdone it.

I loved the retro aesthetic. I think it is important that simple games need a retro aesthetic to be even more enjoyable. And the game was very easy to understand and just start having fun. It was really enjoyable. Thanks for this game. I really missed playing some retro aesthetic. It is rare to find something that stays true to its nature in gameplay as well as visuals.

I would really appreciate it if you could play and rate my game as well! Thanks!

sorry no mac version here, but I'll play this when I have access to a windows computer in a few days

In the meantime, I'd appreciate it if you could play/rate my game as well! :)

edit: sorry, couldn't get this to work on my windows either :(

The game is a Mega Drive / Genesis game, this means that you have to run in it with an emulator and there is an emulator on pretty much any os, cause this old machine was created in 1988.

The win version come with an emulator and that's why you have to run the .bat file, if you run the .exe insode the BlastEm dir you will just run the emulator but without a game.

Really hard game and the dashing enemy was really unenjoyable.

Also I think it is outside of the theme. anything related to the theme didn't affect gameplay.

The less you shoot the more bullets you can shoot. For example the dashing enemies you have better luck to defeat them if you shoot more bullets on them when you are in maximum size.

There is also an inverted mechanic of the theme. The more you shoot the smaller you become.

Just remember that keeping the fire button down will no help you in the long run.