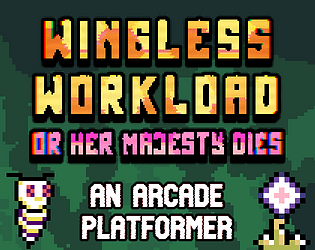 How does your game apply the limitation (and optionally, the theme)?
You play as a bee working for her dying queen (her boss, on the edge of dying). Also, every enemy spawns on the edge of the screen, so you have to keep an eye on the edges at all times.

What main engine/tool/language did you use to construct the game?
Godot

Which diversifiers did you use, if any?
Infinity, Mobile

The story is established quickly and you get right in to the game play. 👍

I liked how it was a grid based platformer, I don't think I've ever played anything like that. I became more of a puzzle game than a platformer, which was neat.

Submitted
Surtr: The Edge Of Ragnarok
LikeReply
ArcySubmitted1 year ago

Cool idea for the movement, although a hard at times. A lot of the times I thought that there were too many enemies on the screen at once, and that made it hard to predict their movements. I love the art style and the arcade feel of this though, good job on that!

Very solid entry, I found it fun and enjoyable. Though I will say I kept trying to treat it more like a traditional platform "Oh, i'll just move and jump over the enemy" and then move through the enemy and die. LOL

I've played a lot of games in this jam, and I've especially played a lot today. I kept seeing this in the feed and I wanted to try it out. I was going to call it a night, but thought I'd jump into this because the clever name and charming thumbnail kept calling to me.

You've already received a lot of feedback about the gameplay, some of the movement and repetition of cycling back through to grab the flower repeatedly criticisms ... I'll say I was expecting a more traditional platformer, but once I viewed it as a sort of tactics puzzle platformer, something I've never really seen, I had a blast working out the puzzles and optimal routes.

But what I really want to applaud you for is that opening cutscene! I could tell off the bat this was a labor of love and it reflected throughout the project, but I can't say enough about that world building and motivation in the opening scene. I was ready to serve my queen!!

I think the art is adorable, cohesive and very well crafted. But from a gameplay perspective, it was difficult to understand exactly which portions of the level I could interact with. After the first level, it wasn't as big of a deal, but perhaps a different outline color, or only a black outline on the interactable objects would help with readability in game.

I could go on about the impressive parts of this game: the music, the animations, the attention and care to the game's itch.io page,  that you made it playable on mobile devices and have an online leaderboard!!! Super impressive jam game for two people. Well done.

Wow that's the nicest thing i've read in a long time ! Thank you so much for the kind words. Every game had its ups and downs and you really summed it up nicely here.

And if you want more, this game is actually inspired by the game and watch gallery series on the gameboy and gameboy advance, especially the Donkey Kong junior "modern" version.

That's some interesting movement, but it was a bit hard to time to tell were you would end up when pushing in a direction, sometimes leading to unexpected hits from the enemies. I could not figure out the tree level 😅
Also I felt like having to pick up the same flower again and again without any difference in the level felt like artificially stretching the length of the game. Maybe change the flower position and have the same level but with a twist ?

Was super cute, the art, the intro, the music. Cool game.

Thanks! Yeah those are all valid points. Moving the flower around is on my lost, and on harder sifficulties the repeatition isn't as bothersome, but i should have changed that.

Alao for the tree, you need to hit that same root/branch as the one in level one to go back in the tree! It's even written on the game page 😉

Anyway, thanks a lot for playing!

Nice game, reminds me of those old Game & Watch games (you’d be surprised how many of those I’ve played given my age - ‘tis the power of emulation. And the gameboy collections… which is what I emulated). However, I for the life of me can’t figure out how to get from the second level’s flower to back inside the tree.

Submitted
Brawl in the Dark Desert
LikeReply
potomaxDeveloper1 year ago(+1)

Thanks ! You need to hit the root/branch, like the same one as in the first level so a leaf platform will appear under the tree door.

And thanks ! I'm a big game & watch gallery fan, so it really was the inspiration for this game :)

Thanks! That is the one issue i couldn't solve before the end of the jam!

I love it! The way the levels are so small, yet so full of character and feel very thought-out, gives it a charming feel to me, like an old flip phone game or an old arcade game. The graphics, sounds, and story are all endearing too. A few quirks like falling through rising leaves in the lower-right in the Tree are frustrating, but overall feels solid and fair, at least to who I imagine the intended audience to be. Also can't figure out how to grab the upper-left coin above the queen in the Tree. Online leaderboards are a great feature for this game (I'm Patgh3). I'll remember this one :)

Submitted
Railway to the Moon
LikeReply
potomaxDeveloper1 year ago

Thanks a lot dor the kind words, I'm so glad you loved it! The trick for the third coin is ro go higher on the vine next to the queen and move left from there, but only once you grabbed the flower 🌸

And nice highscores! You took over the right side of the leaderboard :)

The game is good, but there is much to strive for. At some moments, it is annoying to jump and while waiting for the movement of enemies.

Super cute art and music sounds good! Jumping and moving's not always consistent and sometimes get hit because of that, but other than that i think it's great! I also appreciate the warning before the birds come out

Thanks! Yeah I tried to be extra careful to give warnings before anything since you move so fast. I'll try to rework the movement a bit post jam

So cute it reminds me of the art style of the game yoshi island. Great job

Thanks! Definitely inspired by it 🙂

Wow! Just wow! I had this good old times gameboy flasback, the gameplay is simple but demands precision and timing and the leve design is well thought out. Great game.
At first I though, why it moves so fast an erratic? well a bee without wings is still a bee.

Thank you very much, really glad you loved it :D

LikeReply
Opossum In A JarSubmitted1 year ago(+1)

I really loved the movement, added an extra element to the classic platformer. The graphics and colors are amazing!

Thanks you so much! I think the controls are really love it or hate it from what I'm seeing

Submitted
On the edge of the World
LikeReply
potomaxDeveloper1 year ago

Thanks you! I don't think many got the reference, I'm a big fan of the game and watch gallery games :)

Very beautiful game. The controls are a bit wonky and the leveldesign is too repeative, but other than that, wonderfully made!

Submitted
Do Not Steal Our Ores
LikeReply
potomaxDeveloper1 year ago

Thank you I think you're right about the repeatitiveness

I enjoyed the overall look and sound of the game and spent about 10 minutes trying to improve but personally couldn't quite grasp the teleport like movement, I'd keep overshooting and colliding with an enemy.

My only issue was that you had to repeat the same process multiple times to collect the flower, would have preferred a little bit of randomness with the flower spawns but otherwise solid game.

Thank you for playing ! Totally agree on the repetition, it's my top post jam priority I think :)

Wow! The game graphics are beatiful! (Reminds me A LOT of Yoshi's Island) and the music goes very well with the ambien of the game! I love the game has different leves and difficulties. The controls are unique but sometimes they are not so well explained, for example, in the first level i was trying all the buttons to get on the rope but i can't, until on some way i get on it. Otherwise is very cool! Congratulations guys!

Thank you for playing ! It's a bit weird,  all you have to do is to be under/in front of a rope and push the up button, but hey thanks again :)

Oh my god beautiful! I´m a fan of diversity and 4 different lvs with different stories and different difficulties is what i like to see! :D it was super hard though and i didn`t got the right controls at first. Grafic, feedback and gameplay is realy fun. A little less text would be nice, but with the pictures even that was well done.

Thank you so much for the kind words ! Really glad you enjoyed it! I'll have to work on the controls somehow after the jam, it's really my main feedback it seems :)

Art is very well done! I feel the controls are a bit strange to me, I would have prefered to be able to move freely especially since you have to fight against animals.

The endgame leaderboard is great!

Thanks for playing and the feedback ! Yeah the grid controls are an acquired taste from what I'm seeing, I think having a free movement option would be great to get more players :)