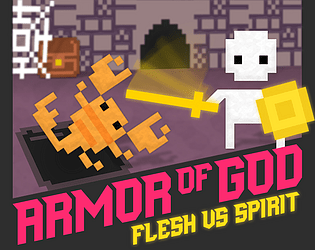 Ranked from 90 ratings. Score is adjusted from raw score by the median number of ratings per game in the jam.

How does your game apply the limitation (and optionally, the theme)?
Your mind is being controlled to do the things your hate making you be on the edge of doing something you will regret for the rest of your life. The Flesh (the boss) is the one responsbile for this and it is up to you to find the armor of God to use against the Flesh and bring peace back to you.

What main engine/tool/language did you use to construct the game?
Unity/Photoshop/Audacity/Premier

Which diversifiers did you use, if any?
8 Bits, Retro Palette

I'm always very impressed with how polished these games from ProdigalSon Games are. Very well put together, clever level design, and I love the atmosphere that the art, music, and gameplay culminate to produce. Nice touch limiting to 8 colors per screen in order to be faithful to the 8-bit style. I also am a sucker for games where the player is able to equip armor and weapons, especially when the mechanics make it feel fresh and unique like the mechanics in this game do.

Thank you. Much appreciated. This was a first for us, in the sense of gameplay and art style so it is good to hear others got some enjoyment out of it. We definitely want to revisit this idea again later...once we've had more opportunities to test out more mechanics we put in our other games to get a good feel for what might fit for this one.

Oh it's all so very nice.

I haven't really got anything to add to the plethora of positive comments here..!

I do love the audio-polish. The sound effect when falling just makes me smile.

Extremely good game! I had a lot of fun playing the game. The progression works extremely well and each item gives you its own really useful ability.

The only small criticism then is that the boss fight does feel way too easy. After slogging through the dungeon for a long time and mastering the abilities, I didn't lose a single heart due to the shield in the final fight. Given the theme of "boss", it could have taken a more central role and   been a bit harder. But that's complaining on a high level.

Otherwise, the game looks top notch, and above all, feels very good to play. I especially like the bouncing off the walls.

Great entry, it was really fun!

This game's amazing. The progression of obtaining items feels perfectly paced and the enemies/puzzles all feel very easy to understand. Super job! I personally want to make a game like this someday :-)

really strong entry! the metroidvania mechanics mixed with roguelike style works so well. Flesh is a really cool villian, feels like everything is a personal struggle of some sorts. Love it

I intended to tell my story through this game (do want to expand on it some more) meaning the struggle between the player and the boss is my own. You got it!:)

thanks and thanks for playing!

A jam winner for sure! Its an amazing idea an executed well. Good job!

chucks, you making me 😊

LikeReply
Opossum In A JarSubmitted283 days ago(+2)

Very nice game and you managed to implement so many things for such a little time! It was very well polished, I liked how you gain power as you progress, feels very rewarding!

Thanks! thanks for playing :D

Awesome game! The mechanic is strong, the music and effects fit perfectly with this retro art style and the controls are really responsive. I enjoyed it a lot. Great work.

Sweet! Thanks and thank you for playing :D

I see what your saying. Thanks for playing! :)

Very fun game, and great progression! I really appreciate not having to start over after dying.

Thanks! We wanted to make sure players didn't feel like progress was lost for the purposes of the jam at least ;)

Very polished and satisfying. However, I think I was missing something-- the arrows would show an enemy moving a certain direction, but I would still be damaged anyway? Great job, though!

That's an interesting idea I hadn't considered. Thanks for the suggestion and thank you for playing! 😀

the victory music was sweet

Submitted
Railway to the Moon
LikeReply
ProdigalSon GamesDeveloper283 days ago(+1)

The level of polish in this is fantastic.  Everything has feed back, clickily buttons, squishy characters, lots of little details that make it feel polished and put together.  The mini map, the transitions when you die, you guys kinda got it all, it feels like a complete game.  Also, can we talk about that cover art?  Way to give all us 90s kids retro nostalgia!

Nice! It's always fun to hit the nostalgia bone and when get the reference too. Thanks for playing!

This game has a very polished feel. You did a great job! Although I too missed a way to wait out one turn and have the enemy get closer before attacking.

Thanks! I hear you and I'll be thinking of a way in addition to triggering events such as breaking things and opening things to trigger enemies to move without you moving while still keeping the Roguelike inspired combat we aimed for.

Absolutely enjoyed this one. Although, it was a bit slow in the beginning when I kept getting defeated by enemies and had to gradually slowly open up the paths. It became super satisfying to get all the upgrades. I wasn't sure what the point of revealing the paths on holes was as by that time I could already walk over holes, guessing I just collected that before it was intended, so if that's the case, bonus points for also including sequence breaking in your game :). The only bit of feedback is once I got the chest plate, the small hearts would only replenish half a heart when I was expecting them to still replenish a full one, but understand its still replenishing one hit point.

Appreciated all the details you put in this game, such as the scrolling room transitions, the detailed map, different music tracks. Also felt rewarded for picking up all the upgrades when going up against the final boss.

Thanks for playing and the detailed feedback.  I totally agree that the heart drops should always replenish a full heart regardless if you have the breastplate or not and I'll be sure to implement that post jam. The revelation of the hidden floors really helps mainly in like 2 rooms where the gaps are too big for the shoes to work but I agree we should have more places where it can be even more useful.

Thanks again for playing! 😀

Really nice and polished game! The slightly curved screen gave it a nice effect. I also appreciate you not blowing my ear holes and adding volume sliders. The mechanics were nice too. Well done :)

Sorry that the music starts so loud but glad the sliders helped with that. Thanks for playing 😀

Oh no they weren't loud at all which is why i mentioned it. Almost all other games are suuper loud

Such a fun game! I do wish you could fight the boss right away though, so that you could try to beat it with as little as possible. As is, I absolutely crushed the temptation of the flesh.

That was the original idea and we debated for quite a while on whether to include that or not. Ultimately decided to require all the pieces really mainly because we were running out of time to consider the possible permutations.