An aerial 2.5D FPS made for the Miz Jam
Submitted by josfeld — 1 day, 17 hours before the deadline
Add to collection 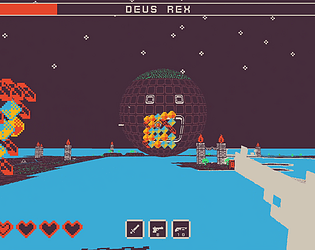 The paced tutorial is very nice for learning. The final boss monster is rly cool, and I kinda wish I was fighting the boss sooner.

5 stars. The mobility is very fluid(something essential to this kind of game). It feels good to play.

Great game! The movement system is really nice and with some extra sound effects and UI work, it would feel really polished and ready for a full game. Admittedly I found the controls quite hard as a lefty, but that doesn't mean anything is wrong with the game, just that it would be nice to have a controls screen as an extra feature (as all 3D games should!). The combat felt pretty clean, but maybe the enemies should miss sometimes :P

All that said, this is a pretty good game and with some extra work and polish it would be very marketable!

Really interesting, I like the movement and interplay between the weapons. I really wish it was possible to retry without having to go to the start and recollect everything. I also think that using a double jump should refill your air dash

The movement feels really snappy, I love it. I think it's a great game, although I'm not very good at it. I easily get overwhelmed by the ghosts in the beginning as it's kind of hard to figure out where am I and where the ghosts are coming from.

Submitted
Battle of the Bald Mountain
LikeReply
wr41thxSubmitted235 days ago

Fun, but quite challenging shooter.  I need to git gud, because I just got wrecked.   Those ghosts have not been slacking off at the range!  Good work!  :D

The movement controls feel really good, but it's a little hard to keep track of where the enemies are, and I found myself dying really fast without knowing exactly how I was getting damaged.
But collecting the extra jumps and flying around through the air feels really, really good! I enjoyed playing quite a lot! Great job!

Very cool game! Love movement shooters. Maybe a double jump in the air would be a cool addition. Great job

The game is pretty cool and overall pretty polish, I like the ideia of the air dash, it makes for some incredible kills in air, a shame that I'm so bad at this type of game haha, but overall really fun and cool game

Really enjoyed this. The movement was exactly what I want from a shooter of it's style and man that boss fight was brilliant. when I saw him I was just like 'Oh!' lol. As others have mentioned only thing I would change is when you have done the tutorial once it'd be cool if on respawn you just spawned at the king again. Cracking game and good job!

Very fun to play! Not a fan of having to redo the tutorial when you revive but it's a minor issue.

Really impressive game, had a blast playing it!

Movement felt real good and the gameplay was nice and clean. Boss was a lil crazy and unique given the art limitations. Overall well done!

Well polished, and fun to play.  Would've been nice to have some backstory so I don't feel like I'm killing innocent people at the start.

Has alot of depth to it and it's very fun to jump around.

Also great use of the art it this game is very unique.

Idea : a richer environment would be great for this game. (Maybe walls and heights?)

That's just my opinion though

Wow!! At first I thought the game was pretty empty but then all hell broke loose. At exactly the right moment.

The movement feels super fun. I'd love to see a parcour platformer in this style. Maybe it wasn't intended but jumping and dashing was almost more fun than shooting :D

Really really cool! The movement was fluid and the I found the boss a blast. Good work!

Cool and good overall experience, good ramping of difficulty from tutorial to fighting enemies to the boss fight.

I felt the movement was too slow, especially on the ground. I wish you got more air dashes instead of jumps when you picked up arrows. Multiple jumps didn't feel that useful compared to the airdash.
I liked the tutorial, except for the signs, as it wasn't obvious that you could hit them to get more information. I also wish you didn't have to play through the whole tutorial every time you died, would be nice if you started right at the kind.
Visual style was very nice, did you use crocotile for it? Also liked the music a lot, fit the game very well.
Found it annoying that shotgun bullets disappeared quickly, had many times where I was trying to shoot the boss with it and it wouldn't work, making me think the boss was invulnerable. Addition of a crt mode was cool, but I think the chromatic aberration effect was a little too much and hurt my eyes if I enabled that mode.
Liked the story elements of you killing the king and his family(?) to claim the crown.
Overall pretty solid entry.