A digging game about selling relics and gem and obtaining life's one true goal: happiness.
Submitted by dqmhose (@dqmhose) — 4 days, 8 hours before the deadline
Add to collection 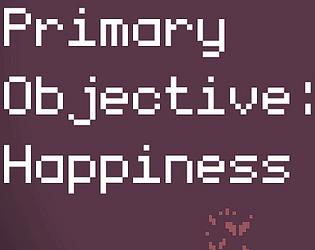 Excellent game. It even haves anti-capitalism ahuahuahuahuahuahua. I don't know if using the magnetism to fly with the colectables was an intended feature bu is interesting.

It wasn't intended at first but it was really fun and very quickly noticeable :D So I left it in. Thank you so much for playing!

Digging was very satisfying, exploring as well!  The magentic attraction felt janky, but in my opinion that added charm.  Played this before ratings were available, glad I rememberd to come back!

Thank you so much for playing! (and rating :D)

The jank most likely results from my (lacking) experience in 2D physics :D

This game is absolutely gorgeous. I really love the art.
I eventually figured out how to use a combination of ladders and magnetism to bring gems back up to sell, but that took several retries, because seemingly once you get lower down, you're kinda stuck down there.
I had a lot of fun digging up my coins though! Although at one point I was able to just keep spamming dig on a block that never disappeared but kept spitting out coins, so I think I either bugged it, or something crazy was going on that let me get basically infinite money, haha.
Great work!

Thank you so much for playing! Yes, the digging sometimes bugs out and I couldn't fix it before the deadline :D

I also wanted to add conveyor belts for convenience .. they're actually done and implemented but they broke physics sooooo bad that I had to remove them before releasing :D

SO SATISFYING! I completely forgot about the ladders and just went for it ending up digging around as fast as possible.

Having the spikes appear in areas that have already been 'cleared' is a great design choice.

Thank you so much for playing and the feedback!

Very beautiful game, love the bloom effect. Looking through the comments there isn't much helpful I can add. The timing of the messages could be a bit better and I didn 't expect the spikes the firs time around. Other than that very polished and relaxing game

Really well done! Especially for a Jam game. I loved motherload as a kid, so this brought back good memories! Really juicy effects too!

I may have found a bug where I was able to mine spikes for a bunch of gold.  I accidentally hit restart, fell down my original dig, then there was spikes right next to my ladder. I just spammed space and was able to get gold. Besides that small thing though, really great game!

Awesome game, pretty neat that you made a digging game like that in the short timeframe. I think I even saw a development stream of yours. Had a lot of fun :-)

Thank you for playing! I didn't stream during development so maybe there's another digging game out there :D

Looks lovely, plays well and has some of the best sound effects use I've seen out of submissions yet. Sweet little story to boot. I would only have to say that the ability/exploit of using items as propellants to fly back to the top is too useful not to be done - I barely used ladders as a reult - but then this isn't necessarily a bad thing. Very nice work :)

Thank you for playing! The ladders took me so long to figure out but the playing around with the broken physics was so much fun .. in the end I ran out of time before I could balance the mechanics :D

Haha, it's funny how key elements of a games 'fun' can sometimes be found in things that weren't intended. Some of my favourite games, as well as lots of speedrunning games, are made all the better as a result of them being fun at the core but then also having features that can be mastered by the player in a way that feels like you've 'figured it out'.

Just re-read my comment as I was typing this and want to re-iterate how lovely the lighting was!

I had the 4 endings! Fantastic game! Really enjoyable.

so on the second minute of gameplay I reached the moon and continued my journey to infinity and beyond, flying on my very first blue gem

Ok, now no kidding! I liked the project a lot. Get ore -> get reward -> get more resources to progress -> repeat until reached the final objective - I like this kind of gameplay!
SFX is nice! You want to hear this sound of coins, you hear the crash when digging the rocks etc. The sounds are good.
The game leaks more juice, such as screen shake upon dirt digging and maybe some effect of earning gold besides the SFX only by itself. Though the game is not very long, some nice peaceful music would cheer the player up I suppose so the repetitive gameplay wouldn't feel as boring. Don't get me wrong, the game is not bad or tedious, but repetitiveness makes you sometimes think "oh well more digging".
Also IMHO something like a counter that shows you how many more fossils/minerals you need to bring to make the client happier.

While playing, I've encountered some bugs. I suppose you already know about them, but I think it still can be useful:
1) Happy icon of the merchant does not dissapear if relationship gets worse, so different smiley faces start to overlap each other (see screenshots) 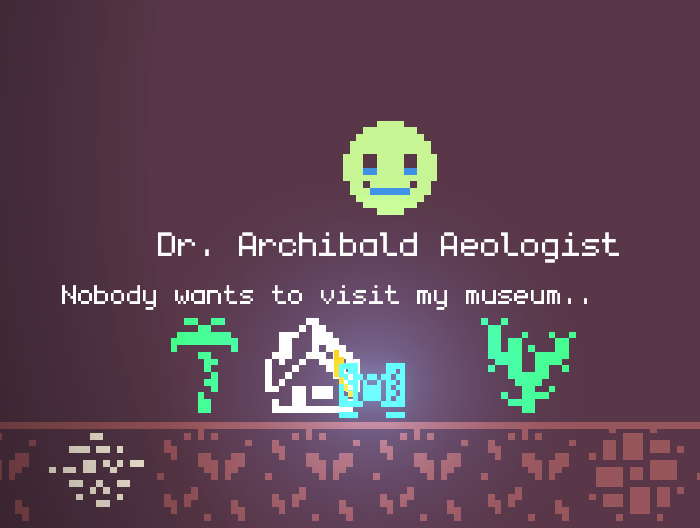 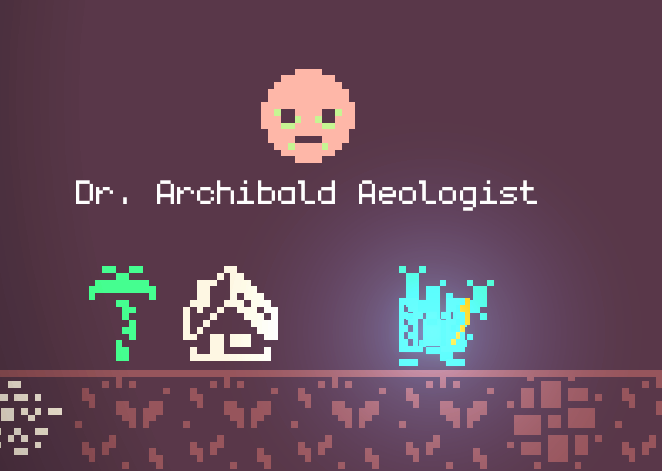 2) Fossils and gems can get stuck in the ground
3) Not a bug, but an optimization problem: a lot of light from torches causes minor FPS lowering.

Overall, I liked the game. It's simple, easy to understand and cute. If the game grew in some way and enhanced, I'd even buy it for a few dollars. Well done!

Wow, thank you so much! Not just for playing but for this amount of useful and extensive feedback. Very useful even.

I actually didn't notice those bugs, so this is very helpful.

Since this was a jam game and I lack absolutely every sense of music, I usually don't include music, but I agree, to create a realxing experience, some calming sound would've been nice. If I ever revisit the game, I'll maybe include some "assets"-music that are out of scope for this jam.

A counter for the gems/artifacts would've been much nicer .. for some reason I watched some GDC video on experimental exploration and thought it would be nice to have some "exploration without explanation" .. but I kind of missed the target and for a jam game things should be pretty clear.

I'm glad my feedback was useful to you!

By the way, it might be a good idea to reach out each other. If you like it, can you give me your e-mail or Discord contact?

Sure, you can reach me by mail at xdqmhose@googlemail.com or via Discord at xdqmhose#6081 :D

I almost had ending 4, but gave up thinking I had broken the game (silly me). Then got ending 3 and went back and played again to see what would happen and when I got 4 it was so satisfying! Very clever!

The use of the assets is very out-of-the-box and the lighting is gorgeous!

I was on the edge of stopping before I got an ending. I'm glad I didn't, but I wasn't quite understanding the two seller mechanics and how it was progressing the game.

I agree, player feedback wasn't optimal. But glad to hear that it worked out - thank you so much for playing!

Very cute game! Once I got the controls down it was pretty fun diggin around. I liked the lil ending for digging all the way too haha. Great job!

Nice idea. It took me a little bit to get used with the controls. But after that it was fun to play. Good game! :)

Reminds me alot of the miniclip dig game (best game)

As feedback, you probably can enhance the controls to get a better "feel" of the game and enhance the experience.

Thank you! Controls are difficult, I learned that this jam :D I think you mean Motherload, some of the previous feedback pointed to that game. There's a more recent version of that (Super Motherload) available I've heard :D

Really fun actually if not a bit grindy.. but grindy in a oddly calming way. Like mining in minecraft, all thats missing is some really calm music and maybe the occasional thought dialogue from the robot. The objective is freedom but it would be really nice if the robot spewed out really deep thought bubbles here and there.

Managed to get all 4 endings. The 4th one is pretty sneaky but I was using the gem trick the entire time and after discovering the 1st ending it immediately pointed me in the right direction for the fourth. Really natural progression there actually.

Thank you so much for playing and the detailed feedback!

I wanted to add so much more but jam games usually spiral out of control if you don't limit the scope :D I tried going for "short but sweet" so that with hundreds of jam games one could play through it in a couple of minutes. Thanks again!

Thank you very much for playing!

I had a lot of fun playing this game! Some of the physics were a bit weird but it also made for some very funny interactions. You could get above a gem or skull and use the magnetism to basically fly upward as the artifact pushed you up from below haha. This game felt very polished (other than no music... but it's a game jam so can't blame you), and I loved the use of lighting. It really made the look of your game feel unique even though everyone used the same tileset. Not sure if I got all the endings or not but I had a fun time playing through. Great work on this submission it was loads of fun!

Yeah well .. turns out physics are harder than I thought :D The "flying" was a "happy little accident" and then I enjoyed flying around the map using a bone so much that I kept it in. Next time I try my hand at physics, I'm going to tweak it a little bit though xD

I like the look and lighting of the game. The sound effects are also very satisfying!

Very fun, very engaging. The lightning effects are beautiful. Almost everything felt very smooth but sometimes I had issues getting the stuff I gathered back to the top because of the physics :D Tweaking that a bit should do the job. I also forgot the controls the first time. It would have been nice to have a way to show them again (for example in the pause menu).

Other than those 2 things, you did an amazing job!

Yeah .. physics is hard :D Thank you so much for playing!

In the future I will definitely include a control-scheme in the game somehow.. I noticed a lot of people are having problems with it, since it's a lot of keys at the same time :D