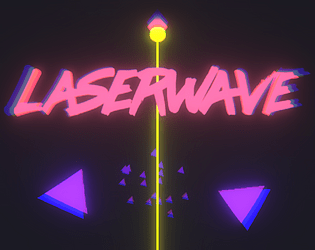 How does your game fit the theme?
Music makes you lose control! Also you cannot directly control the character and all your actions are defined by the music.

Edit: I was playing the game and noticed that theres some gravity, which is weird, considering the fact that in the game you move through those blasts, or maybe im just imagining it, not sure

It was a fun game but i completed it pretty quickly it would be more fun if there was more levels but overall it still was a really fun game.

Awesome, at first I was a bit confused getting used to the game's controls but after that it was pretty fun to play.

The mix between sidescroller (with gravity that you have to keep in mind) and rhythm game was very interesting idea.
Moving & trying to dodge both the screen's bounds and the enemies were hard because of this dual-purpose nature of controls where you have to aim with mouse for both moving and shooting.
But if you get the hang of it then it turns into an interesting decision game where you have to either focus on dodging or dealing damage to the boss.

Meanwhile, I was able to occasionally go out of bounds and stay there without getting a game over.. Aside from issue like this, overally the game has interesting mechanics in it & it was a pretty solid and fun game to play.

A super cool idea and great execution! Loved prety much everything about this game!

Very fun rythm game! I really want to see more song or an editor where you can map your other musics (like freedom dive xD). Well done !!

Submitted
I DID NOT WANT THAT CARD !
LikeReply
Infohazard GamesSubmitted2 years ago(+1)

This is a really, amazingly cool game! It took me a while to figure out, so some kind of tutorial or help screen would be greatly beneficial, but once I got the hang of it, I couldn't stop playing! This is probably the only really fun rhythm game I've ever seen come out of a game jam, so great job not only getting the gameplay to feel really good, but also nailing the retro 80s aesthetic! I'd love to see more maps, beats, and there might even be a way to generate the map given a song! Anyway, I'm excited to see where this goes.

Easily one of the coolest games I've played, everything about this is so good. It's actually pretty hard to move your mouse around to get the kind of movement I was looking for, but when it worked it worked so well. I would love to see more of this!

Uhmm maybe have a tutorial? I tried so many times, but couldn't figure out how to play it. The game looked really pretty though

Man I loved that! You gotta add some more levels when the rating phase is over :D

If there's a six in presentation, you get the six.

Even the powerups are tied to an instrument. Nice Job!

This is probably the best shoot-to-move game I've seen this jam! Really clever and unconventional twist that I felt was restricting at first but once I got into the beat it became really satisfying blasting that wall! Great job!

This game is very cool! I enjoyed it, but it needs a tutorial. Overall, good job! rated! please check out my game too :D

Submitted
It's Over
LikeReply
MalyvenSubmitted2 years ago(+1)

So I admit this took me far far longer to figure out than it should have.

But I absolutely loved it once I did.

It works just insanely flawlessly (it will probably be even more amazing if the player has a vague sense of rythym ) :D    I can not wait to see what you do you with this, but you must do something with it.   Way to good to let go.    I would recommend a tutorial of some sort to intro the player and go from there.

This is so cool :O Just loved it ! Thanks for the game !

Submitted
Too Many Bullets
LikeReply
NK13Submitted2 years ago(+1)

absolutely love the appearance and the beats - its a perfect combo!