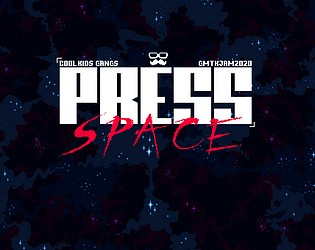 How does your game fit the theme?
You have to control various aspects of your ship (and social life) by pressing or holding down certain keys on your keyboard. The theme is taken literally, in that you run out of buttons to press.

At least 20 stars for art/music and the gameplay is on point. The UI is probably the best I've seen this jam. I'd buy this game.

Definitely my favorite game so far, very polished and fun! My only problem was on my second play through my girlfriend never messaged me which made me kind of sad, maybe she broke up with me :(

Submitted
Out of CTRL
LikeReply
BOONDeveloper1 year ago(+1)

dang I'll have to look into that , thanks you for the feedback!

Very cool game! Graphics look amazing, and I loved the warning sounds! I hit my keyboards hardware limit of simultaneous presses unfortunately, so I had to let my sensors die hehe.

Top tier artstyle. I like the overall execution of the theme.

Wow that Art <3 so fine! I really liked the concept of having to manage your relationship while trying to do your job. I was more interested in the relationship stuff tbh.

I wasn't sure what the buttons prompts down the bottom did until half way through my second playthrough, I wasn't sure how to refuel and was hoping pressing the sensors button would point me towards a refuelling station. Eventually I realised you need to mash buttons really fast which hurts my hands so I had to stop.

The visuals are soo good. I like the idea, it has potential as a mobile game. Well done!

Submitted
I DID NOT WANT THAT CARD !
LikeReply
BOONDeveloper1 year ago

Thank you we really tried to make a professional game.

Oh, how I love the visual and auditive warnings when you're low on some sort of element. This was really satisfying!

thanks you very much!

There seems to be a bug, in which the texts are all nearly invisible which makes them hard to read, and the letters for the buttons straight up doesn't exists. That weird bug aside, this does looks like an interesting and hectic game! Good job!

Fun little resource management sim. Graphics and effects are top notch. But there's not much substance to the game, especially lacking an ending. I chose the wrong answers to piss off the girlfriend but never got to see her slap my character :P

Thank you!  unfortunately we ran out of time to add an ending screen/win condition. :)

My fingers are killing me, damn you ! Great concept and execution <3

Is there an end btw ? I reached the finish line but nothing happened, except i felt bad for ignoring Julia (even though i was dying haha).

Thank you Colin! We ran out of time to add an ending screen but reaching the finish line means you've won ;) And yes Julia is a bit much at times haha

Fantastic visuals and a solid 5/5 for the originality.

fantastic comment thanks for playing, glad you had fun  and I hope you had a great day 10/10

I had an issue with the display: I could only play in a small window (not resizable), and a bit of the right side of the screen was cropped (I discovered in the screenshots that there is a red button on the right).

Anyway, I was still able to play it (I think?)! It's quite fun, and indeed you quickly run out of buttons, or fingers to press them. :) I really liked the tone of the game, and the humor it has both in its dialogs and its mechanics. It's weird to control, sometimes, obscuse, but that's what make its charm. Everything becomes unmanagable, and you end up accepting the idea of not having functioning sensors if it means keeping some oxygens! :D It's a really nice entry!

I really love the art of this game! Good job!

Beautiful presentation! I love this style of diegetic UI!

I was super bummed when I didn't get to see the surprise though - When I got that text I hit full throttle coz I was excited to see what it was! : p

gonna have to make a post jam featuring the gf throwing a HELLA SICK PARTY!

The way you steer the ship is brilliant. And the game is gorgeous as well.

I really liked the concept of making the player deal with an overwhelming amount of UI, it's too bad the ending wasn't implemented.

Thank you! Yea it was unfortunate the ending was not there. Hope to add one post jam :D

Such a great presentation, the art is gorgeous, the UI is professional level. Even some dialogues.

Boon is the man behind the UI / dialogue magic and Fred with the gorgeous art. Absolutely talented peeps