HAPPY BIRB
Change the game rules for birb
BOON
Puzzle
Press SPACE
Manage your spaceship's controls before you run out of controls
jasontomlee
Simulation
GIF
CRAFT JAM
Rhythm based bullet hell where moving/dodging/crafting can only be done on the beat!
BOON
Rhythm
Boon's Wall Sawblades
BOON
Time Traveling Therapy Ch 1
An RPG where no one has to die.
BOON
Role Playing
[2019 DEMO] Wally and the FANTASTIC PREDATORS
The fastest rogue-lite ever created.
BOON
Action
Duck Jam
Micro-games with an emphasis on humor. Inspired by WarioWare's quick game play and flamboyant personality.
BOON

dang I'll have to look into that , thanks you for the feedback!

thanks you very much!

Thank you we really tried to make a professional game.

fantastic comment thanks for playing, glad you had fun  and I hope you had a great day 10/10

This game makes me feel scared

gonna have to make a post jam featuring the gf throwing a HELLA SICK PARTY!

great execution, really feels like the lack of control compliments the genre quite well!

Hi PDX! Yeah I've been working on Wally
I was thinking of making a postmortem on our GMTK entree.


Been working in Wally in the meantime, which you can check out here.

I know what you mean, sometimes one gets so good playing the same few levels so much that they become their worst enemy. Definitely would recommend at least shortening the death time.

It was definitely hard ngl but I managed to go through it the second level. Once I saw the third level's ending I immediately closed the game down immediately.

It took me roughly 5 minutes to beat the second level. I struggled and fought the controls but heck I'll try my best to see what's in store.

My biggest gripes is that dying forces you to wait 6 seconds. 6 unskippableseconds! It's like a huge amount of time to wait in between runs and considering I was died over 30 times most of the time spent was waiting rather than playing.

I understand it was made in a short 48 hour time frame window but the simple act of moving around your ball is hard but not very satisfying for the reason that physics system does not work in the way you anticipate it to.

The reason I closed the game is because in the second level It is very easy to  overshoot your ball. Due to the boolean nature of the vacuum cleaner. (Your either sucking at max speed or you're not) But overshooting is penalized, if your ball goes offscreen you die. You wait 6 seconds and start over. The designer of the levels put these goal posts next to the offscreen edge meaning that even the smallest margin of error will result in failure. 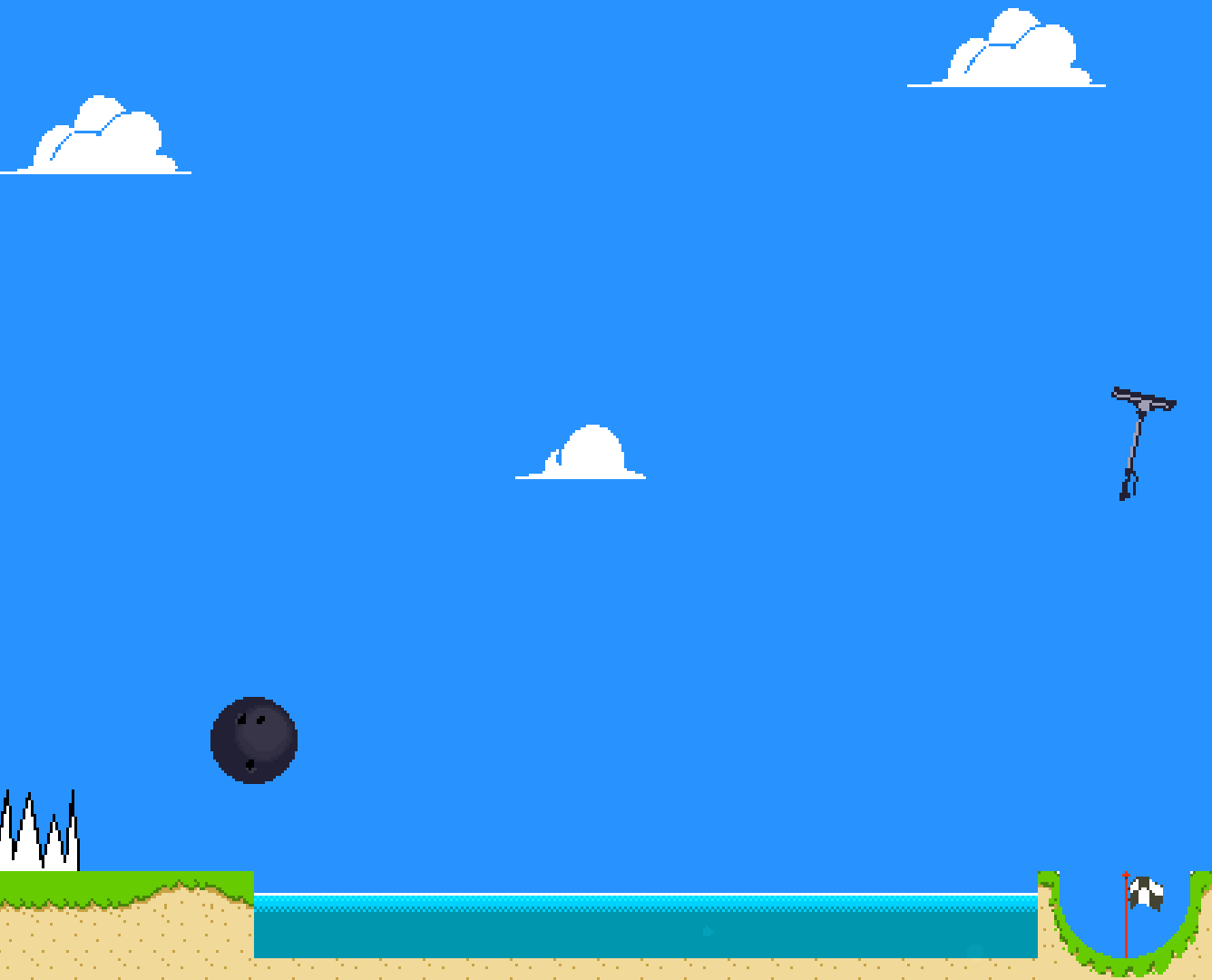 Due to the ball's having quite a bit of bounce If you manage to somehow to pull the bar high into the air and really sickly land it into the goal post the ball will end up bouncing but sometimes it would react to the slopes around it and sometimes it would not. And due to the sloped edges of map the ball would end bouncing up in unpredictable ways, the golf ball is worst contender.

So the logical and only way to win is get the ball on the edge of the water press your mouse once or twice so it doesn't overshoot into the goal post, and prevent the ball from bouncing as much as possible.

My biggest gripe is that these systems make the game harder to play, having bouncy balls in the game is a great idea if it's going to make the game funner such as basketball.  Only here I'm deliberately fighting to not have the ball bounce at all or I might end up losing.

Simply put there are more features in the Steam version than in itch such as daily runs which our discord bot grabs and posts in the Discord.This bot is incompatible with Itch right now. Making the Steam the slightly more completed game than on Itch for the time being.

I suspect it might be a firewall or an issue with Windows Defender . I'd recommend turning them off or windows defender while launching Craft Jam.

Try right clicking on the .exe file and run as administrator

Thank you very much that is a very nice comment! Glad you enjoyed it!

thank you very much, glad you had a wonderful experience!

That was my first game! I'm so happy that you remembered and had a wonderful time!

Glad you enjoyed it! If you'd like something with this kind of writing try https://booon.itch.io/time-traveling-therapy it's a free game that I made.

Thank you for your nice comment, btw it also reminds me of Crypt of the NecroDancer

Hope you where able to reach the end and thank you very much for the kind words.

Thank you very much, the dialog was my favorite part too.

Glad you had a wonderful experience!

Thank you very much. That's very kind of you!

Reply
itch.io Community » Game Development » Release Announcements · Replied to Chaz in Craft Jam: A Rhythm based Bullet hell, where you can only move/dodge on the beat
BOON184 days ago

Oh shoot your the one who drew Fail's sprite! Great work , I liked it so much I just HAD to make it into a game.

Reply
itch.io Community » Game Development » Release Announcements · Created a new topic Craft Jam: A Rhythm based Bullet hell, where you can only move/dodge on the beat
BOON186 days ago (2 edits)

Made this crypt of the necrodance /undertale inspired bullet hell where you can only move/dodge on the beat that I thought ya'll would enjoy!
https://booon.itch.io/craft-jam

Very chill and relaxing, crafting food felt pretty nice. One thing I would like to see is maybe a button to speed up the text so that I can make food faster (most of my downtime came in waiting for the customer to stop speaking)

most innovative use of the crafting mechanic I've seen, combine things to create life! Loved the chill and relaxing ambience!

Keep it up! You have a slick camera system and great game feel

Game becomes really fun when you realize you can start working as efficiently as possible, really dig the fact that your icon gets smaller as time passes

really dig the color aesthetic choices! Wasnt able to get too far, I encountered a glitch that turned the screen black and reloading the page didnt seem to fix it :(, please let me know if you upload a non html version

thank you I'm glad you had fun