A pinball world with only one flipper
Submitted by Willem Rosenthal (@willemrosenthal) — 3 hours, 1 minute before the deadline
Add to collection 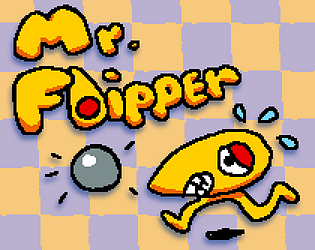 Really loved the idea, although the transition from "flipmode" to "walkmode" could be smoother.

I absolutely ADORE the concept. The game is oozing with style and certainly feels super unique. I just wish the beginning wouldn't be so abrupt and a bit more beginner-friendly. Would be a lot less worse if the lava would start rising only after half a minute had passed or so, I think.

Very clever idea! It is pretty difficult but I enjoy it a lot!

Very clever idea! It is pretty difficult but I enjoy it a lot!

The camera zooming in and out is very uncomfortable....

Submitted
One By One
LikeReply
Bionic ApeSubmitted2 years ago

Great idea, though I found it hard to get the ball to go where I wanted it to.

Cool idea, but pretty much unplayable.  It is probably because the main character turns its head in the direction of movement and also because the ball feels very heavy and unresponsive, i feel like the ball should move like 3x of what its speed is now. Also probably the main character is smaller than it should be, but i can be wrong about this. Also there is a definite lack of audiovisual feedback and scaling, but you probably know it youself.

This game is pretty hard, but also very enjoyable!

As another very rated game, I gotta say that yours is a total 5-stars. Difficulty does feel steep without a score to compare from run to run, but without it, you've somehow reinvented the pinball genre to feel more roguelike.

Very solid game that is really impressive for 48 hours. I'd love to see this game with proper testing and polish of full development. Needs a restart button. Difficulty curve seemed a bit steep at times. But a lot of fun.

Very cool game! I really like the aesthetic and the idea of the game.

Submitted
One
LikeReply
GamesOfShadowsSubmitted2 years ago

Switching between 2D and "3D" reminded me of Paper Mario. Well done!

This blending  2d on 3d effects is realy cool

awesome concept ! camera is a little bit hardcore but gameplaywise it's perfectionnn ! <3

This game is so easy to recommend to people, my teammate played it and now I'm playing it too.

Why did this remind me of old school arcadey Japanese games? Maybe that's why I loved it so much.  Such a cool and original concept too. I was such a nervous wreck playing this, my hands are still shaking. 5/5