Solve puzzles underground with only ONE light from your magical staff.
Submitted by Rytisok — 5 hours, 19 minutes before the deadline
Add to collection 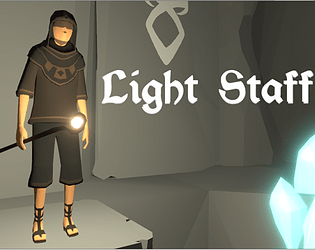 Fun game with really cool mechanics! But the falling animation takes a lot of time to start, which disappointed me as I thought I could come back up! Also, it could use a jump mechanic...

I'm impressed that you made an entire 3d game for a 48 hour jam! On that alone, congrats and great job! I like your light mechanic and your puzzles are fun. Like a few others said, the controls could use a little work (just being able to move diagonally would be a great first step). My only other complaint is that I would sometimes shove the mirrors into areas I could not back them out of, forcing me to reset. Either modifying your levels (wouldn't recommend) or allowing the player to grab and pull mirrors would fix this. Again, great job!

Submitted
Only You
LikeReply
RytisokDeveloper1 year ago

Thank you for your feedback! Will definitely keep it in mind in the future updates.

Interesting idea! The controls could definitely use some work, but the mechanic is great :)

I really like this game! It is a very clever idea thematically! And it has some very good puzzles! Great! What I liked was that, unlike most "Only one light" game, you didn't just use the light as way to look in the dark, the light is the core of the game's mechanics, which is really clever. But, what I didn't like though was the player's movement. It was a bit clunky at times; sometimes I would fall off the edge for a reason out of my control. I also didn't like the camera controller as much, even though you had some cool ideas (like to hide the wall when inside a cave), but in general 'sometimes', the camera would be too far in one direction, meaning I couldn't see either where I was going or what was ahead of me for the puzzles. Apart from these few polishing problems, this game was great! Very original and coherent to the theme! Well done!

I made a game very close to yours under the theme "Only one light", where the light isn't just use to see but also as the core mechanic. Would love if you could check mine out too! Or not, no pressure ;)

Submitted
Lightless - Only One Light
LikeReply
RytisokDeveloper1 year ago(+1)

Thank you for your constructive feedback! Checked and rated your game too!

Casting light? Very thematic! I've seen quite a few "only one light" games, but yours actually explains why there is only light, which I think is really cool. The first time the black mist appears, you guide the players attention to a crystal that has no function other than holding the light, which I thought was some clever explaining!

The movement is really clunky though. Being able to move in only one direction at a time, and needing to stop to move in another direction feels jarring, which takes away a bit of the magic for me.

Nonetheless, I think this is a cool concept, you should be proud!

Great idea, maybe work more with light, but nice work on one weekend

Thank you for your feedback. Will definitely check your game too!

I love the concept, have had thoughts about using light in a game myself.
Level design was good.
I think the movement issue wouldn't have been as big of an issue if you could grab the mirrors to move them. I felt like I kept over pushing the mirrors.
What you got done is impressive for 48 hours! Good job.

The actual level design is solid, and the play with throwing and using the ball while on moving platforms is neat. The major issue however is in the controls. The fact the player prioritises left and right movement, and can only move in 4 directions is a bit jarring and the stopping time for movement feels a bit slippy for a game that sometimes needs some very precise movement to avoid falling off edges.

If the player movement could be tightened up just a little bit, it would help the game feel a lot better. Still for the 48 hours, a solid level design, only a little hampered by the movement.

Thank you for your feedback, rated your game too.

Hey there, I played through your game at around 11:30 in this video https://www.youtube.com/watch?v=ig6dOEJRIUM

Controls are fine, but you can't move diagonally.

The level design is very good, but sometimes is frustrating, since if you fail a puzzle or you fall down you have to go all the way back from the start.

Anyway, good job and I hope you keep upgrading it after the jam.

Thank you for feedback, rated your game too :)

Cool idea, a little clunky but worth checking out :)

Thank you for your feedback! Light mainly gets stuck when you try to press on player, or another object blocks it, definitely will fix in future updates

Eventually i got stuck, didn't have a crystal left to shine on and the gate wouldn't open. But generally the game feels nice. Movement is a bit stiff and sometimes the light would go to my old mouse position instead of the new one. This concept could make a pretty decent game with some polish.

Tried to polish the levels as much as possible, but nevertheless, thank you for your feedback!

With an improvement of the main character's movement and other minor inconveniences it can be turned into a fully-fledged puzzle game.

I was engaged in the gameplay. The game is well designed, original and fits the theme.

the graphic just blew me away <3 Great Game sir

Thank you for feedback :)

with a bit of polish might a great puzzle game