Submitted by Ikoms (@Ikoms4) — 13 hours, 11 minutes before the deadline
Add to collection 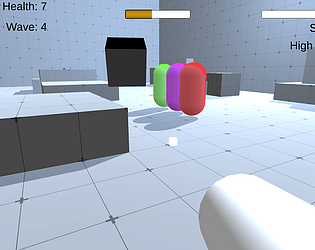 I don't know if i was the only one to have this issue but the image was kind of stuttering, when moving it was even more weird, like i had the previous frame right before each new frame, it made it a little harder to follow the movement.

Otherwise i like the idea of charging, though i didn't really saw the point here, as charging only throw it a little further and faster, it won't help you kill more enemies that are aligned (which is a shame because it would feel great) plus the further the bullet goes the slower you can shoot so the game actually makes playing close to enemies better.

Though it is quite intense to dive in a swarm and try to avoid everything, i beleive charging should help you make your bullet pierce through enemies, or it could make it bounce off objects. Some slowmo when close to a lot of bullets/enemies could be cool too.

The controls felt pretty great, would have loved a bit bigger level, doing some parkour while trying to dodge hoping for your bullet to catch up would feel amazing.

Lastly i would recommend to do something to be able to differentiate the projectiles, like some color or else to know which follows you and which don't.

Thanks for the feedback. Im not sure what the image stutter problem that you are referring to is, as far as I know no other person has had this problem.  In regards to killing enemies that are aligned, that is actually possible.

It is possible but really hard and it could be more satisfying, charging could make the bullet lose less velocity on impact, so that the enemies don't have to be super close

amazing concept... best in my books

First 3D shooter style game I've played this jam :)  I like to jump on the boxes to evade the shots, it seems to work about 50% of the time.

Really nice concept and game play, but graphics are quite lacking

Nice idea, would have been cool to have a twist like the ball will ricochet on the walls!

The character movements are slipperyish not great and it's a bit hard to keep track of all the enemies.

Submitted
The only NeOne
LikeReply
Tom JongensSubmitted2 years ago

It's a good concept. I do think you could've put a little more work on the esthetics off the game. Also no sound?

I would agree with some other commentators about the bullet being a bit slow. Nonetheless, I pretty much enjoyed the game. Hint: Group up enemies and shoot them all! =D Rated! Congrats! Best of luck to you!

I love it just like mine it has no art haha! As for the game it's really nice. There's things that need to be tweaked of course, like the movement and maybe shooting. But I found myself grouping everyone together to kill them all at once which is what I think was the intended player experience. Good job!

Bullet is maybe a bit too slow. sounds would've made it better

Thanks for the feedback. Bullet speed is probably one of those factors that I'll tweak a lot if I develop this some more

The bullet compass idea is brilliant, I was trying to think of a recommendation but that works for sure.  Don't think it was too hard to play regardless, just something to do if you work on it further. This is my second ever game jam as well, good entry!

Quite fun and good use of the "one bullet" concept. Would be pretty cool if you could kill enemies when you recall the bullet.

Submitted
The One Spear
LikeReply
IkomsDeveloper2 years ago

It's like playing Titan Soul as a shooter :D I think you need to insert a compass to search the bullet or a button to recall it, it is too small to find sometimes :(

Thanks for the feedback. A radar will be the first thing added if I develop this further

Congratilations on the game! The movement was a little slippery and I think you shot could be a little faster.

Submitted
One Minute One Life One Hit
LikeReply
MikaahSubmitted2 years ago

First shooter I saw around here! Really like the room layout.

Thanks I spent some time working on the layout until it felt right.

Controll is a bit sharp, and it’s not immediately clear about the power of the shot. But still cool!

Submitted
One room, one minute, one nightmare
LikeReply
SpicyPaperSubmitted2 years ago

I think some user response are missing. For exemple I would prefer to have an indicator of the bullet force, to know how far the bullet is going to be thrown.

If it's your first Jam compliments, it's a great goal to be able to finish and load something like this.
Congratulations.

Submitted
There can only be ONE
LikeReply