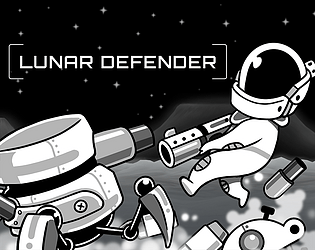 Theme interpretation
A space soldier has to stop the invasion of a horde of robots in a mining facility at the moon !

Amazing platformer! :-) I really liked the gameplay, but I couldn't make it pass the first boss fight.

Pretty cool, this has a nice aesthetic and I like the idea of protecting the containers and having tools that can help with that (such as the blocks), though it felt like there was a huge difficulty increase at the point where one had to protect the container for wave after wave. I do think that letting one stand still while aiming the gun would help make the shooting feel more natural as I had trouble landing hits where I wanted them to. Fun game overall!

Good one! Nice smooth gameplay, not just platformer, but with additional puzzle mechanic, I liked this one!

Nice game! Dropping cubes is a cool addition to the normal 2d jump and run shooter. :)

Graphics are nice, but the background music was too repetitive.

Controls felt a bit counter-intuitive to me, but that is just personal flavor. Would have been nice to adjust the buttons but that's probably too big effort to add for a game jam.

Game suddenly was way too hard for me when I reached the second container to protect. A ton of enemies + flying enemy were too much to protect it for me. Probably I didn't understood how to do it. :D I dropped a lot of containers in advance to block the container, but that didn't helped much.

I really like the cube dropping mechanic, I think it was the highlight of the game. Blocking enemies and making platforms was something somewhat new and innovative, and with some polish and level design focused on that, you could make a very special game! The shooting felt great, each shot looked very good but the enemies took so long to be killed the the shots felt weak (also I can't fire the laser I see on the screenshots for some reason?). I also think the controls felt a bit unwieldy because we couldn't do short hops, and we were forced to move if we wanted to shoot diagonally. I think that basically you have a good foundation of a game, it just needs more polishing. Great job!

Submitted
From the Core
LikeReply
codefrommarsDeveloper152 days ago

Thanks for you feedback ! For sure we'll balance and polish the game more :D Glad you liked the cube. The beam is the third item you receive (after the bombs and mines).

Very good game with nice aesthetics and sounds.Monochrome theme was good and enemies are great. At some places it was too difficult to handle enemies. But thats made me play that stage multiple times. Nice tutorials too for a Game Jam submission it clear and right to point.

Thanks for your feedback, glad you liked!

Awesome!  Only thing that was annoying was having to run towards the direction you were shooting.  I was going to say use the directional keys to aim and then have just a "run" button that yoou press if you want to move in that dirction, but you already have so many keys in use haha.  You might try just making all the keys besides shoot/r into a single button, and then toggling to which you wanted to use.  So like q/w toggles through all of your options, e uses the special, and r uses shoot.

Thanks for the feedback ! We surely will work on simplifying the controls.

Glad you liked it :D Yes, sadly we didn't have much time for balancing. As you suggested, the idea for the mines is to have a cool down after you use 5 (without energy cost). And the same for the laser beam.

Nice game! The shooting is very good, and the visual style and sound in my opinion is original. However, I ran into a some problem, for some reason the input didn't work in WebGL (I played in the downloaded PC version).

Glad you liked it ! What kind of gamepad do you have?

Hi! I use, regular mechanical USB keyboard. It seems that this is just another random webgl bug related to the combination of platform and browser. In PC version all Ok. I also observe with my game in the WebGL version, for example, some have problems with rendering, and someone does not start the game at all, although the PC version works fine for everyone. I don't really understand what these things are called for.

Ok I see. What browser/OS do you have? Just tried your game and it works pretty well in Firefox/Win10, cool game btw :D

So. I'm use Google Chrome on Windows 10. I also have another browser and I have already noticed that there is a difference between them for WebGL, maybe I should try and restart the browser, clean cookies, cache and see what happens. In fact, I was surprised to find that WebGL is very unstable from platform to platform, from browser to browser, form user to user and etc., but I do not understand what this is due to (the old Flash technology seems to be more reliable). Additionally, I can check with my XBOX-controller.

Very cool look! Shooting the gun felt very satisfying and the add a box mechanic made for a nice change of (thinking) pace while you're being overrun by enemies =)

I played with a keyboard but I can imagine that playing it with a gamepad would have made it even more enjoyable.

Thanks for playing it. Glad you liked!

The shooting is super satisfying. Some levels are quite tough, but it's nice that you can just keep retrying. Visuals are good and I like the enemy designs. It's a good game!

Thanks, glad you liked!

Well done! The gameplay works fairly well, though I quickly became overwhelmed by enemies, balancing the player's health and the energy needed to spawn boxes required more strategy than I was ready for on a late Sunday evening :P But it's definitely interesting and I might come back to it.
I didn't find much use for mines though which didn't seem to be worth the trouble in terms of damage vs energy cost.

The graphics and audio are both quite good and serve the gameplay well!

Thank you for playing the game and for your feedback. Glad you liked.

The box powerup added a nice little bit of strategy to the defense sections. Good stuff.

The shooting system of this game is great, audio and design makes the game more interesting and fun.

Thanks, glad you liked!

It took me awhile to get past the part right before you get the plasma ray. I think most of the abilities aren't worth the cost when shooting them all is usually the more effective and reserves the resource. The exception would have to be the box ability for me, as it's really good to strategically block off the enemies. The gameplay was challenging, but not to the point of frustration, which led to a satisfying game experience for me. Great job!

Thanks for the feedback ! We'll for sure work in the balance of the abilities. Glad you like it !

I like how shooting works. It would be nice if the direction of movement of the gun is continuous rather than discrete. The graphics, effects and combination of enemies is really good. I really enjoyed playing as it becomes challenging and not very easy.

Adding full support for the joystick is on the plan. Maybe even interpolation for the D-pad direction change. Thanks for the feedback !

This is only a nitpick, but if your game doesn't use the mouse, find another way to "close" UIs, having to find my mouse just to click a button is kind of annoying ^^ Nice art !

Oh, maybe it was not very explicit (or just didn't work) but [Enter] or [Space bar] should do the same as clicking the button. Also if you use a controller the "jump" button does the same. Thanks for the comment !

LikeReply
AM EDucated VEGtableSubmitted160 days ago(+1)

Very well done animation! Love how the char moves and can watch to different angles! Had to get used to targeting the enemies with the gun though, especially when they came from above!

Yeah, we tried to get the animations as smooth as possible !