Embark on a journey alongside MonMon in a perilous world plagued by beasts that wreck havoc in the realm.
Submitted by Chryss55555, Yaz (@yscribes), atheniann — 1 hour, 24 minutes before the deadline
Add to collection 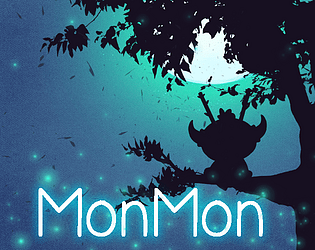 Ranked from 110 ratings. Score is adjusted from raw score by the median number of ratings per game in the jam.

Theme interpretation
We use the Moon as a resource to power MonMon's "shooting" ability, which we refer to as the moon ray. Also, MonMon is on an ambitious journey which takes him far higher than he's ever been before, which resembles more closely the dictionary definitions of moonshot.

very nice game , BEST game ever i have played!!!!

and also thanks for commenting my game also plzz rate it if you have not... thanks :)

Good work for the both of you! I liked the cute art and the gameplay.

After the boss fight, in the dialogue, the color of the player text was almost the same as the background dialogue box so it was very dificult to read and the moon was "consumed" to full eclipse. I don't know if this is a bug.

Over all, good little game :)

The graphics are very well done.
The moonlight mood is very well captured.
Congratulations on this great game. Please continue to expand.

Great artwork and audio! Really liked how you acquired more abilities as you progressed through the game :D

The intro felt a little long, but overall was very fun!

Beautiful illustrations! I wish it was a little faster paced, but nice world building!

Thanks for a great submission!

I really loved this game.  It's beautiful, and the audio is great, too.  Well done!

The only thing I struggled with was the "health" concept.  I couldn't see a meter anywhere, and the bit in the intro about using your ability on shooting stars never did anything obvious.

I failed to make it to the end, but it was really very well done.

Thank you for all your kind words and for taking the time to give us valuable feedback!

I look forward to it!

it was fun i got to the boss battle and then lost my slash tho.

The game looks phenomenal! I love it so much! The art style is too good for my eyes :D.

1 - The gameplay feels boring. Perhaps because it lacks in feedbacks like audio and visuals. Needs more of those.

2 - The ship segment was too long.

Other than that. I really love the art style of the game. Lots of wallpaper worthy shots!

Thanks for the experience <3

great game, I love the color palette you chose

thank you for all your kind words! happy to hear you're a fan of the artwork c:

This game is utterly gorgeous, both visually and aurally, but you knew that already.

The gameplay is good, in a difficult-but-satisfying platformer-y sort of way… except for two sections that are hard to the point of frustration. The boat, you know about (but I’m glad I persevered and got past it). And at one point in the climb, there’s a tricky jump, but the respawn point is right under an enemy, so you have to moon-ray it (and dodge its fireballs) over and over just to try the jump again.

There seemed to be a couple of glitches after the final fight. The witch’s first line of speech disappeared seemingly before it finished appearing, and I don’t think I hit anything to skip it. And MonMon’s dialogue appeared in a lighter colour that was almost invisible against the text-box background

And… hmm, how can I talk about the story and its end without spoiling anything? I’m not sure I can. Anyone who hasn’t finished the game should stop reading here

When you get to the final fight, the witch’s complaint seems like it should be a point where you can decide not to fight her. But unless I missed another option, you do in fact have to fight. Only then does MonMon suggest what seemed an obvious resolution. But even then it’s a little unsatisfying. The original question isn’t answered! How did MonMon get there? Did the Coven have anything to do with it? Was the fisher-lighthouse-person lying? Who’s right? Who’s wrong? I still have so many questions!

So yeah, I think the story is good, but could be great.

Really neat game! I enjoy my... l a s o r v i s i o n! A few points I would like to make is the UI and the damage indication. I noticed a few spots where jumping and collisions were misleading. One of these was trying to jump onto the dock. Could have been just me.

Furthermore, I was having quite the time trying to deal enough damage to with the vision. Pretty unclear if I was actually dealing adequate damage.

Overall, very nice, and the art is eye candy!

Thank you for taking the time to play our game and for commenting! If you think this is nice just wait and see the post-jam version!

Clearly the game is beautiful. The best-looking game I've played on the jam so far. And I also want to recognize how well thought out and put together your menu is, and the introductory writing and tutorial.

But then I will echo a few points made by other commenters. I'd definitely appreciate more UI for health and progress and possibly enemy health. Your moon eclipsing gauge was so brilliant I would have loved to see that applied elsewhere.

And lastly for gameplay, I thought it was the only real weak point. I died on the boat and really wanted to get to the parts in your screenshots, but didn't have much incentive to keep playing. I didn't know how much longer I had left on the boat, and I was craving to do new things in the game except deal with more and more bad guys.  And maybe the later levels do offer some innovative gameplay, but then I'd recommend nerfing the boat level, or adding some metagame (maybe some items to collect or a reason to dash around the boat) in the middle of it so that players don't lose momentum and give up.

Thank you so much for taking the time to play MonMon and for taking the time to leave such a well thought out comment! The boat section is going to have to get a big overhaul, as many people seem to struggle getting through that section. We've also received a lot of feedback about needing UI for health tracking, and that is something we are adding to the post-jam version of MonMon.

Great presentation, feels like a proper game. Didn't get past the boat, though, zapping the guys felt a bit like hard work.

Thank you for taking the time to play our game and comment! I'm glad you enjoyed the looks and feel of it, and we will work to make the moon ray more satisfying to use in the future.

Submitted
The Adventures of Moon-Man
LikeReply
Chryss55555Developer2 years ago(+1)

Thank you for playing MonMon and taking the time to comment! I'm sure this comment will put a smile on our artist's face!

Thank you for playing our game and taking the time to comment! Our artist and music producer popped off and I'm happy to see people are loving the graphics and audio so much!

I don't consider myself a super good gamer, but I have played through my fair share of platformers and shooters and I could not get past this boat part. I kept dying. I died about 3 times before I just gave up. It was just too long and fighting the same 3 enemy types was getting old really fast.

I need to hear or see feedback (or both) on whether the moonlight attack was working. I know it works because that old lady in the beginning told me, but a sound or visual effect that I'm hurting the enemy would help a lot.

The sword felt useless on the boat. Even if that exploding enemy gets close, it explodes and damages the boat. I think some tweaks to the enemy behavior would make using the sword easier and satisfying.

I wish I could have had more time to get to the parts in the screenshots, but that's all the time I had.

Thank you so much for taking time to play our game and for leaving feedback! We definitely need to add some sort of feedback for when enemies are taking damage, and I think knowing how much health you have would make it easier as well. I'll work on making sure the sword is more satisfying to use as well. This kind of feedback is vital for creating a great post-jam version, so once again thank you.