Game about an armadillo exploring the dungeon despite the fact that he can't jump
Submitted by angrysnail (@angry__snail), Distrait (@distrait) — 28 minutes, 35 seconds before the deadline
Add to collection 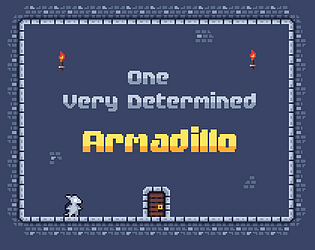 Theme interpretation
This game is a hybrid of a puzzle-platformer and golf simulator. Main character can't jump but he can roll up into a ball and launch himself in any direction like a golf ball.
And also Aztecs called armadillo āyōtōchtli which translates as turtle-rabbit, so main character is a hybrid in some sense too!

This was a really cool game. Really loved the theme interpretation here and felt really innovative. The graphics were really cool as well and it felt very well packaged overall.

I think the physics were interesting, but I'd have definitely made him actionable after 1 or 2 bounces as I feel like not being able to control him after this detracted from the fun of the game. Especially with the spikes being introduced so early. The character felt like he had the same physics properties in both character mode and ball mode so would have been nice if they (friction and bounciness) were reduced for the character.

Overall though, this game was really enjoyable and one of my favourites so far of the Game Jam!

Thanks for the feedback! You are not mistaken in your feelings - the properties are in fact the same ball or not! This was due to time and my own limited knowledge about the built-in physics engine that GMS2 has. It was fun to try a feature I haven't used before but in the future I will stick to coding my own gravity and physics. The  nice thing about it though (if I could have gotten the rest feeling better) was things like the box rotation and slopes were very easy to implement.. too bad we did not make much use of it!

I loved the mix of genres in this game. I think it is a smart interpretation of the theme. Sometimes it feels frustrating because of the physics behavior: boxes that keep moving, small jumps of the armadillo after it hits the ground, and weird launches. Restarting the level after dying should be instantaneous. I liked its level design, the tileset, and the background music.

If you could comment and rate our game, we would appreciate it.

Thank you for the feedback! This was my first time using the  built-in physics engine in GMS2 so I was not at all familiar with it. It caused me a lot of problems that you described here. Next time I will stick to coding my own gravity and other properties :)

Only thing I'd ask for, maybe just in the beginning, is a trajectory line for the ball so I can get a stronger idea of the game's physics without too much hassle. Just a thought :)

I really enjoy playing this game. The hybrid of game mechanics makes it fun... and challenging. Great work!

Thank you! And thank you so much for making a video about our game!

Loved just how many levels there are in this! The graphics and music are awesome, and the idea feels quite unique. The later levels with less spikes were actually the most fun for me. I'd love to see something that can help show you how you'll land before you make a disastrous jump. Overall, a very high quality game!

Really enjoyed the game! The concept is amazing and it was pretty good challenge.

I like the idea and it's very point on "hybrid" theme.

Bounce sometimes is quite heavy and it's hard to predict, but I guess this comes down to being proper hard core game and each level only has limited number of steps, so it's not that hard to figure out in the end.

Thank you! And yeah, we'll change "back to the menu" button from P to obvious Esc. Kinda got caught up in a moment and overlooked this (it was supposed to be pause button, but we couldn't manage to make proper pause in time so binded exit funcion to pause button without changing the keybind) :-D

Very creative idea! Love the golf mechanic, would be cool to see more interactions with it in the game. Solid graphics and theme overall :)

This is a great puzzle game, awesome work :D

Great graphics and mechanics ! Loved it!!

LikeReply
Side GroupSubmitted3 years ago(+3)

Love the combination of mechanics, the game has a great vibe!

Loved the graphics and mechanics! Very original and enjoyable ^^

Great idea and really nice graphics but I feel like I don't have enough control over the character.

I'd be nice to have ability to break out of ball once armadillo is rolling slowly on flat ground. That door shake effect feels so good ^^

Thanks for your feedback! I think the idea was that breaking out of ball mode would make things too easy. Though I think after playing through myself the difficulty is a bit high right now.