You are a brain detective, infiltrate the suspects mind and nimbly hop your way through their mind!
Submitted by YOYBROY — 5 hours, 11 minutes before the deadline
Add to collection 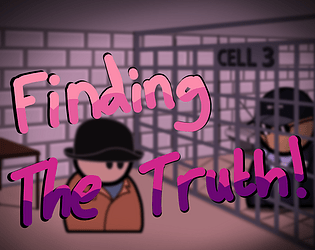 if you don’t want to play the buggy version, add to collection as I’m working on a new and bigger version.

Rated - Really great character animations!  And so many levels kudos!  Good job submitting a game.  Hope you learned a lot from this jam!  Take peoples suggestions and improve the game, or your next jam game.  Please check out my game when you have time~ good day!

Submitted
The Quest: Trapped in a Lie
LikeReply
YOYBROYDeveloper201 days ago

thanks for the feedback!! Yeah I'll check out your game today!

Really like the art style.  There is a pretty nice level of polish too (all the squashing and stretching in the menus looks very nice).  Fits the theme decently well, and overall it's a nice little platformer, good job!

Really liked the character art. The characters won me over with the wall climbing. The fact your stuck the detective on his side is inventive, justified, and just works. The art in general is quite consistent, with the exception of the coins, which look like generic blobs of yellow, the green hazards, that look like stretched textures and the PFX cubes, which don't gel with the rest, in my opinion. But character animations are so expressive, all of this is forgivable.

The character controller is a little finicky. Air control is very abrupt as soon as any key is pressed, so you see the character stopping in the air or completely reversing his X direction. Somewhat difficult to control and leads to unnecessary deaths. Jumps are also odd to trigger. Sometimes i press the input key and they jump refuses to come out. Not sure what's going on there without seeing the code, but in a precision jumping platformer this would be one of the first things I'd look into.

I don't really see how the theme is hit. The game isn't a liar. The characters are.

The thing I had the least fun with, over time, was the level design. There are very few mechanics in the game, so as levels progress, I noticed repetition creep in. Felt to me like I was doing the same locomotion patterns over and over.

Overall a solid entry. Needs a lot of work to make into something great though, from my perspective.

Thanks so much the for the  in depth feedback, I definitely agree with most of these points and think the wall climb is my favorite part as well.

Yeah the coins and green goo are pretty bad and I agree that I could have done more to make the PFX more consistent with the games art theme. Hmm I didn't have any problems with the jumping when play testing and totally agree that it is important to get right. I suppose your right about not hitting the theme directly, I just settled to hit it loosely and make the game about a lie or something to do with a lie instead as I wanted to use this game jam as a learning tool and didn't see another instance in which I would explore platforming. All in all thanks so much for the long and thoughtful feedback! I will take all of this into account for my future projects!!

LikeReply
in Principle GamesSubmitted209 days ago

I also took the theme loosely. It seems to me that not doing so produced fairly poor games, with very few notable exceptions.

That was really cool! I really liked the the text flying across in the levels and the platforming mechanics felt good. The art looked really good too, nice work! :)

thanks for the feedback!!

Hi! :D Really polished game! I had so much fun playing! Loved the artwork - the scrolling text was a really good idea and kept all the levels visually interesting. The game design was great and the increasing difficulty of the levels made the game appropriately challenging. Audio was very good overall, I particularly liked the biscuit collecting sound! Amazing  job! :D

thanks so much for the kind words!! I was worried the words thing wouldn't come across properly but great to hear that everyone is understanding it and liking it!

Pretty solid platformer. The art is quite cute as well. I really liked the whole inner toughts idea with those phrases floating around. Nice job!

thanks for the kind words!

Your game is pretty good! I really liked how the scrolling text helped contextualize the mindscape sequences. Solid plataformer controls too, just wish there were some way to see the ranking.

Thanks! I'm glad you understood what the scrolling texts were, I was a bit worried it wouldn't come across properly. About seeing the ranking, what exactly are you referring to?

I had fun playing your game, the mechanics were so good and the art was so colorful. I like the brain background and the texts coming across the platform, the transition between the options menu was a small detail but I really liked it.

However, there are few things that I would like to mention:

1- I wish if I can see my score, total time spent, tokens and death while playing.

2- Deaths won't restart the level. That means there is nothing to worry about if I died (I won't lose my tokens) and that makes the level easier.

Thanks for playing my game, I'm glad you enjoyed it. Yeah both great pieces of feedback, I'll take them into account for future projects, I was going to add the tokens count and stuff into the game while playing but ran out of time and the tokens not resetting was a conscious design decision because dying in my game already affects the final score so I didn't want to punish the player too much, but I will definitely take you advice on board!

I liked the innovative controls, movement, and level design within this game.  It was really fun to play! And with some more time and tighter/faster paced levels this game could really become a great marketable product.  Great job!

thanks for the lovely feedback, I'll take those into account for future projects!

Thematically i don't think its as strong because you can just change the setting of the scenes and it will still be the same game. The art i loved however, thought it was very well done and what i can only recommend is some fitting music.

Submitted
The Enemy is What?
LikeReply
YOYBROYDeveloper212 days ago

great feedback, glad that you liked it! I'll definitely work on theme and music for my next game!

Interesting story setup, but I feel like you could have integrated it more into the levels. For example the scrolling text now says a bunch of things about facebook, why not have it say the memories of the suspect. It was also quite difficult to double jump over enemies on small platformers. Though the scarf trailing behind the detective was funny. Perhaps you can add some music as well. My score was 573 (with 24 coins collected).

thanks so much for the feedback! Definitely all great points and I will keep them in mind on future projects!

Your game has very cool mechanics and is good at level design but you can make your game better with the following things : First of all make the tokens valuable so the player really wants to collect them . Because without going for the tokens your game is very short and easy also you should have spent more time at art for example the tokens are just yellow circles and the poisonous water 's graphics are just effortless . Also after a certain point the game play becomes a little boring without music you should definitely add some music  . But overall the game fits the theme very well so good job !

Submitted
The Game Is a Lie
LikeReply
YOYBROYDeveloper212 days ago

thanks for the feedback! Yeah I agree with those points, I am just starting out with game art so I couldn't get the poison goo right and thought I better not spend my entire week trying and It was my first time doing any audio but will definitely work to improve those things for future games! 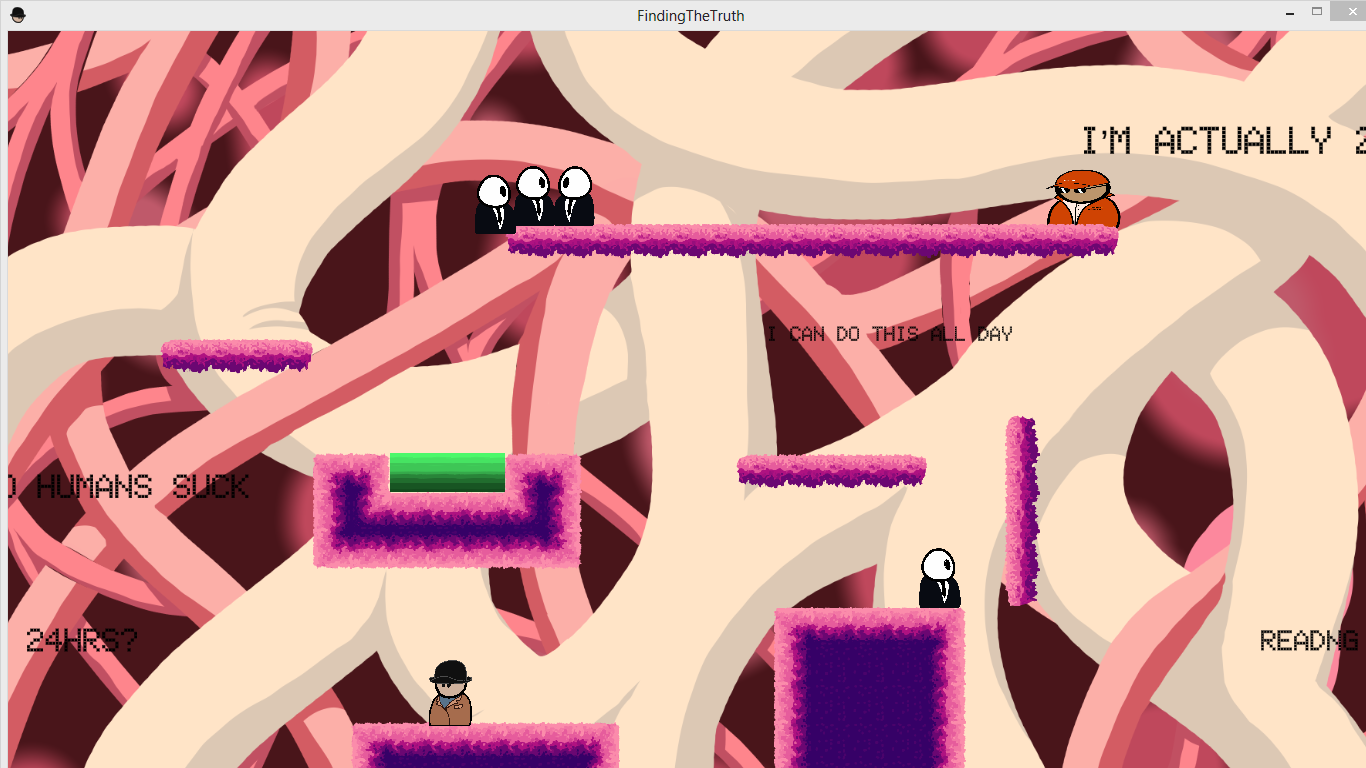 Thanks for the feedback! I'm glad you enjoyed yourself, ahh yeah I didn't properly integrate enemies colliding with each other and it was a last minute thing to put them on the same platform so that can happen, if you hit escape and go into the pause menu there a "restart level" this will reset the level and you can go from there, that glitch doesn't happen every time.

I like the control scheme! Very satisfying. Good work m8!

Not bad.  I really like the scarf how it follows you! Would like to be able to use  arrow keys to move as well as asdw since I am left handed, but I was still able to beat it. :)

Ahh yeah I fully forgot about adding those controls in, thanks for the feedback, next game jam I do I will make sure to add alt controls

The visuals were really nice with the Prison Architect look. :D

Congrats on making it! If you have some time, I'd love if you checked out my game! ;)

Thanks, I would check it out but I am not on windows, sorry mate