In this RTS game, you must help your troops get to the nearest castle while avoiding enemies, spells and lies.
Submitted by Dan Zaidan (@danielzaidan) — 53 minutes, 56 seconds before the deadline
Add to collection 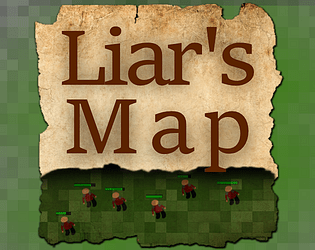 Not a fan of having to select my units. There is no reason to split them up. Even a hot key for select all would help after you return from the map.

Game crashed when I completed the third level.

Overall design is good. Didn't make it far enough to see where the theme of the jam fit in though.

Still, I appreciate the solo effort. GJ and good luck on future projects.

Thanks so much for your comment and your feedback!

Cool, looks like RTS, but I can not control all my troops when they already face enemies, pretty unpredictable yet fun :D

All my troops are dead because I just wandered around the map, lol.

Yeah I took an extra challenge of making it in C with no engines :P

I talk to it a bit more on the Making Of video! :D

Wow awesome :D I will watched it

My dev partner is right. This game plays very well. You can tell when something was made by a skilled engineer. Especially when you have a 144Hz monitor. Every hiccup shows, and this had none of them.

That's really awesome to hear! Thanks a lot!!

You can see in the making of that I spent effort getting it running nicely! :D I'm super glad you liked it!

Pretty surprised by this game.

I've follow your posts on the community forum when you was dev-ing it, and I didn't expect that it would be that great.

I mean, there are indeed things to improve: the audio is okay (at least you made music and sound effects), and I didn't like the art that much - but that's personal.

But we can all agree that the mechanics and the gameplay are very good, innovative and fun. Plus, you're following the theme with all of those bad indications so yep, well done!

All we have to do is keep improving, game after game. ;)

All in C? That's an impressive feat all on its own.

Hahaha Thanks! It wasn't easy! :P

You run a YouTube channel? You can expect me to be watching and learning from your tutorials! Your project really inspired me to learn more about C and C++.

That's great to hear!! I started two months ago and I have awesome plans to help spread the loe level love. :)

But I warn you, once you start programming in C/C++ you will never want to program on anything else again. Hahahah

The big maps are a nice challenge!

This Game makes a lot of fun! I like it very much =)

I would love it, if you also try out my game =)

Nice submission! Very impressive mechanics and innovative gameplay. Requires guessing, planing and careful approach to achieve best results (or at least finishing larger levels which I failed xD) but I really like it.

I very much enjoyed playing Liar's Map - I'm very impressed that you managed to get this much done in only a week!  Some general comments (in no particular order, just as the thoughts cropped up during play) below:

1) I loved the concept of the 'one truth and two lies' maps - definitely an interesting mechanic, and the ability to investigate/eliminate/cross-check them during play (e.g. by putting ticks and crosses next to them on the Clues window) made it a good part of the gameplay too.  It led to some interesting emergent strategies as well (e.g. do I sacrifice one of my weaker soldiers to investigate whether there really IS an enemy camp in this quadrant, allowing me to eliminate the other two clues).

2) Minor point: it wasn't always clear (on the main map or on the overworld map) what some of the objects there were - e.g. the blue star(?).  Possibly just because I never stumbled across the thing they might represent.  Not a major issue at all, as you can pretty much use whichever image for whichever concept you like during play (you're marking up your own overmap, after all!)

3) I still have no idea what the gateway-type objects are/do.  I think I destroyed one?  But another one ate one of my men?  Don't know.  Does that vary depending on playthrough?  The danger of hidden-information games is that the player might not pick up on/be able to fully appreciate some of the intricacies of what you've built - if the gateway does something different on each map, for example (though I'm assuming it doesn't and is simply another hazard!)

4) We liked the soundtrack - it fitted well, and was pleasant enough to listen to without being intrusive/distracting.  Again, impressed you managed a soundtrack as well in the time!

I'd definitely recommend Liar's Map to some of my friends - it's a nice mix of careful, slow, thoughtful planning, and frantic "oh no I've just run headlong into a camp of enemies because I missed an obvious logical inference" action, which works really well!  Thank you for building it - very much enjoyed!  :)

(You also appear to have made a game that my girlfriend enjoyed watching/correcting me on, which is a rare thing - congratulations?)

Thanks so much for your feedback! It was super valuable information.

Really good use of the theme!  The mechanics are very cool too.  I liked your Devlog video as well~ Keep up the great work!  Please check out my entry if you have the time~ good day!

Submitted
The Quest: Trapped in a Lie
LikeReply
Dan ZaidanDeveloper3 years ago

Thanks so much for dropping by! :D

Hey I couldn't open the game. Maybe because it is 64-bit. Would you send me a 32-bit version ?

Yeah it's built for 64-bit Windows.

I tried targeting x86 but I couldn't get OpenGL to load. I'm sorry. :(

Nice idea and mechnics, with more polish and more levels this can be a great indie game! I also rated the game,

Awesome! Thanks so much! :D

Cant believe what you were able to accomplish in just a week, really interesting and cool take on the theme!

Thanks for your comment! You might enjoy watching my making of video! It shows all the ups and downs of the process :D

That was great! Really interesting take on faulty information in an RTS. Initially I thought I could game the system by just sending a single scout to find the path but as the levels got bigger that stopped working... Good job though! Also omg the fog of war looked so nice!

Really enjoyable game! I liked the style of the gameplay and exploring the map while thinking strategically was so fun. Well executed :)

Wow! Thanks so much much for your nice comment!

Very interesting idea, very expandable and fun to play. Nice the possibility to create many kind of notes on the map. The music was a bit annoying after some time. Overall great job.

Nice game, i especially like the combat mechanic although the controls took a while to get used to :)

Awesome that you came by. Thanks!

Nice Game ! the idea is interesting.