Will you listen? Or will you learn the truth?
Submitted by ItsJustJord (@itsjustj0rd) — 2 days, 15 hours before the deadline
Add to collection 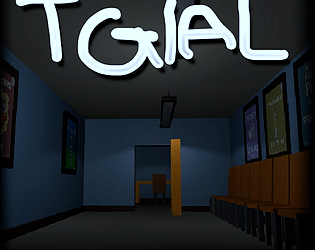 Submitted
The Race: A Track of Lies!
LikeReply
StephcraftSubmitted1 year ago(+1)

Interesting game. The narrator is funny xd. I agree the rooms are a bit too dark. Also I found a bug:

I should of added gravity... oof xD
Thank you for playing :)

some interesting concepts here there, for a game made in 2 days you did a astounding job, congrats!!!

Am I playing as a child? Cause those computers in the back sure make me feel small lol.

Really, really good! I liked the feeling it gave a lot.

The voice was very fun to listen to, and the music (although simple) was good too. My only real complaint was that the music/sounds can get overlaid over each other, like how you can get up before the voice finishes talking and it starts saying another sentence at the same time. The same thing happens with the music at the end.

It was a little short, but it was a good experience.

Submitted
Land of the Lard
LikeReply
ferdibakirezerSubmitted1 year ago

Hi, so i played your game and i'm gonna comment about it now. I played all the way through your game, or at least i think so, unless there's some sort of second ending but anyway. I was confused, was it a horror game i was playing or some sort of puzzle game, regardless the game was way too short i know we only had a week but still.. The game doesn't fit the jam theme because there's no deception involved at all, I know that you tried to make the game fit the jam with the voice never lies thing but i don't think it worked. The 3D models were cool, but i don't think they fit the vibe of the game. I said fit a lot there but anyway.. The voice acting was cool, honestly your a good voice actor, so that's a plus i guess lol. The audio in general is good in this game so kudos. That's all i got. I don't wanna diss your game anymore than i've done, so imma go now. Bye!

Thanks for the feedback it's greatly appreciated the only thing i would mention is that I did this in around 2 days at best, I didn't have the full week. Also I'm very interested in which areas you didn't think "fit the vibe". It might be able to help me in the future!

Hmmm.... 2 days.. Well color me impressed.. sorry for that.. But anyway this is a horror game right? And i don't think the models really fit the horror vibe.  Models like the school doors and the computers and pretty much everything else didnt fit the "vibe".  If the lights werent dart then i wouldnt have even brought up this point about it being a horror game and all that stuff. And im no pro reviewer im just a dumb kid. Dont take anything to seriously in life. Wow now im even giving life advice.. nice.. anyways im just giving my opinion. Thanks and cya!!

Everything is too dark. Objects' height is sometimes plain wrong. But it's still a nice submission :)

Sometimes multiple narrator sounds play at once, but other than that it was good.

Submitted
What's On the Menu?
LikeReply
RamiroVargas-DevSubmitted1 year ago(+1)

Your game is great i like the art and the narrator, i will like if the rooms could be less dark

I had some problems interacting with the elements, occasionally the "press E" message did not appear. The room with a computer and 3 cabinets was quite dark.

I have appreciated the graphics (it was quite rich of different elements) and the narrator voice.

Hope you check my entry, feedback is welcome.

I like the 3d environment you set up, it's really cool, some of the tables are too high for a human though XD The wall posters are hilarious as well, you even include the CGJ icon, and the moment I stared at it, the "voice" was even conscious about what Im doing lmao. The "About" section in main menu didnt fit my screen well enough though, so the anchoring needs some readjustment. It's a great game overall!

I liked the use of the theme. The story was interesting and I enjoyed the playthrough.

Really nice, reminded me of the stanley parable, loved the voice acting. I went right, I'm not sure if I won or lost..

Interesting interpretation of the theme, with some british humor haha! Also enjoyed the randomness factor, that could be expanded further.

When I interact with those file cabinets and "run" through them, the player gets lifted, even all the way to the ceiling, and gets stuck at that height, so can't exit through doors anymore. Didn't you use gravity for the player? The file cabinets' physics is ok.

That was really impressive, like a mini Stanley Parable. Well done!

The music was a bit too loud and drowned out the voice a little. Otherwise it was nice!

Thank you for the feedback, I wonder if it's possible to change that now with an updated version or will that be cheating :thinking: ! :D

unfortunately you can't make changes during the jam :(

It's pretty dark in the game, making it a bit hard to see. Though, the mouse sensitivity was on point; so that was nice. The music was alright, but perhaphs you can add some more ambience.

Agreed! thank you for the feedback! :)

someone please hold my hand :D i really freaked out when one of the furniture moved or not sure what it was  but something was there and it was scary :D Pretty nice game overall. Good Work work

It was the spooky filing cabinet, it's holding all the maths problems xD

keep up the good work