A shooting game where you slap giant robots until you die.
Submitted by OneThatEatYou (@OneThatEatYou) — 1 hour, 20 minutes before the deadline
Add to collection 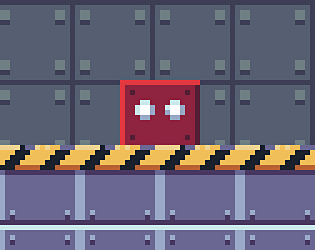 Please list any pre-made art/music/code/other assets that you used.
BGM and some SFX (duck quack & popping sound when screw is detached) is pre-made.

Anything you want to say to players before they play?
There are some bugs that I didn't have time to squash. The main one will be that screws on hands will be covered by the body.

Cool idea, love how it feels to unscrew the robots and watching them fall to pieces :)

A very fun little game with a unique premise. Taking down these big robots piece by piece as a duck by unscrewing their limbs is great fun, and using the camera to pinpoint which screws are vital adds an extra level to it all.

The only two bad things were, as a few other comments mention, if you die you have to restart with space, which then makes space restart the game even when you're not dead, and the fact that the music doesn't loop.

I think it's the most original mechanics of the jam. Some issues:

- Music is not looped

Really fun idea! I like boss battles where you have to “dismantle” the boss making them weaker over time, it’s very satisfying. I also like the screws mechanics, though most of the time I found myself just unscrewing everything.

The only problem I encountered is that pressing Space after dying just keeps restarting the battle instead of jumping. And the only way to fix that is to restart the game.

Hey. I recorded a video about the Unexpected jam and included your game in it. If you want to cut your game out of the video, let me know. However, if you like the video, I make similar videos every day. I will be happy if you subscribe. Anyway, I enjoyed playing your game.

I like how you decide to create an unexpected game : By using a random sentence generator.
And the result is pretty cool, well done !

I like the concept and how it plays! Easy to see what to do and how  after a few tries.

Thought this was really cool. The fact that you chose a small bird to be the player in the face of giant robots was really great - it made me feel much more protective of the character than if it was just a random person. The colourful visuals are very nice and the sound/music are also both great. The only small thing I'd want to change would be to add a second noise for the springboard so that it isn't the same sound every time - but honestly this is such a tiny thing that it barely matters at all. Very good job :)

Making a game out of a randomly generated sentence was very smart and the flashing warning was very thoughtful. Loved the controls, loved the screws mechanic and yeah, you really slap robots until you die! I enjoyed it a lot and I could totally see this as a boss mechanic in a full game! And everything was so cute as well! Many congrats.

Loved the game and loved that you managed to take a random prompt and turn it into a really fun experience! Generally, I find that Unity HTML5 games run much slower than the Windows version so I almost always suggest folks to include a PC build in tandem to the HTML version (I had a little bit of trouble moving around with the subpar framerate, but I know it would definitely run way smoother as a Windows build). If you had a windows build I would totally be playing the game for way too long that I was supposed to XD

I love the idea of dismantling a giant robot while you fight it and I think you've made a really solid experience! I love the idea of using a camera to reveal the enemy's weak spot! It feels a little bit more rewarding/sophisticated than "shoot the big red eye". This would definitely make a great boss fight in some kind of 2D duck action-platformer :)

Some suggestion/feedback if you want to explore this game a little more:

I'm always a big fan of adding "fun" movement like dashing, double-jumping, or wall-kicking/climbing in games because it makes the player feel more in control. It's super rewarding to be able to sh'move around the area as if you're a speed runner making all the optimized movement. I had to wait for the robot to not be above the spring so that I could approach the top parts. I'm also a big fan of a "do nothing" button where folks add a button that absolutely provide no gameplay value like a "quack" button or some other.

Thanks a lot for the detailed feedback! I kept the controls at the bare minimum because I am still testing out this idea. Many players are still having difficulties understanding the core mechanics, so I am prioritising that first.

I will definitely try adding some cool techniques that the player can learn and master as they play on a future build. A useless quack button is also a great suggestion.

Thanks for letting me know about the performance issue. I will include a windows standalone build after I fix and polish this game a little more.

This is a great game, took me a bit to understand but yeah, random modular robots is a very smart choice =)

Thanks. It was my first time trying out something like this. Glad it worked out.

I made the mistake of trying to play without reading the how to, but after I read it was a lot of fun.

Gave me Shadow of the Colossus vibes!

Thanks for the compliment! It’s great that you were able to understand the mechanics and enjoy it.

LikeReply
Lets go to the grindhouseSubmitted321 days ago(+1)

Submitted
The Boy in the Dark
LikeReply
OneThatEatYouDeveloper321 days ago(+1)

Still, thanks for trying it out.

Very interesting concept, needs some work, but I really like the creativity put into it. Would love to see this continued.

Oh and the music isn't set to loop, but I won't count that against you, simple mistake.

Thanks! With more polish, this project is pretty expandable but I want more people’s opinions before doing it.

There seems to be a bug making audio not loop when exporting to WebGL, but I will be fixing that.

For me this game was okay. The robots is looking really cool, and the music is really good (but there is a issue with music stops playing). I can's say I totally understand how I am suppose to fight the robots. I did have fun trying to beat the robot, but I did never really seemed to damage it very much. Overall is this an okay fun jam game.

Submitted
This Is Not
LikeReply
OneThatEatYouDeveloper321 days ago(+1)

Thanks for playing! The mechanics are weird and hard to understand at the moment.
To explain it simply, you use your camera to find vital screws and unscrew them to detach a part. The robot does once all the parts are detached. Unscrewing decoration screws does nothing.

This was cute!! Fun, too, and unexpected. :) Adding the jump pads was great, and are the robots randomly generated?? (even if not, still cool variety of robots). I liked how there were multiple attacks to dodge, and the whole concept of slowly dismantling robots is just fun. Would have maybe liked some effect when mousing over screws so I could get a better sense of the hit boxes.

It also took some time getting used to the snap tool. Even just having that explained more on the game page would have helped. I had to restart for the tutorial again to understand what I was doing with these polaroids. Was also wondering how much the snap tool/attack added to gameplay? At least as-is, and for the robots I fought, basically all the screws were vital?

Thanks for the feedback! Showing hit boxes for screws sounds like a great idea. I will test it out.

I was rushing it when making the instructions, which is a bad idea for this kind of game with weird mechanics. I will be improving it.

Screws that ‘shine’ in photos should be the vital ones. You only need to unscrew vital ones to detach a part.

Very cute and interesting concept there. More balancing is needed in the game. Altho, i do not get the unexpectedness of the game.

Thanks for playing! The unexpected part of the game is a little forced, but it is the fact that what you expect the game to be like from reading the instructions is different from what the game actually is.