GMTK GJ2021 - A Synthwave Racing game where you have to merge both ships into their combined form! Ranked #94/5800
Submitted by ajkrooneman, Temperin, F.isik, LPaicu — 1 hour, 43 minutes before the deadline
Add to collection 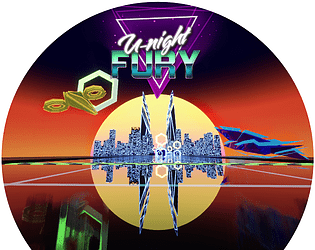 Ranked from 166 ratings. Score is adjusted from raw score by the median number of ratings per game in the jam.

How does your game fit the theme?
The two controlled ships can merge together into a faster form, in order to get all collectibles you have to split and combine at the right time.

A big thanks to everyone who has played our game! We are really grateful for all of the positive reactions. Our team consisted of four friends that know each other from architecture school , one of which has experience in making games. We went into this without any expectations and we are surprised we ended up in the top 100 overall! We had a blast making this game and we hope you had fun trying it out!

The gameplay's super fun, the vaporwave asthetic is beautiful, and it's all solid!

Glad you liked it and thank you so much for the compliment!

Really great game! I loved the main game mechanic first and foremest and the graphics and whole theme of the game was really cool! I didn't get to play much of it though since it was very laggy on the browser but I get enough impressions from the stream ;)

Submitted
A Tale of Two Twins
LikeReply
TemperinDeveloper1 year ago

Thank you for trying! It should not be, it should be very smooth. We had some people experience the same issue but trying a different browser should do the trick! Thanks for the compliments

Really cool mechanics and I loved the art!

Amazing visuals and good mechanics. Had a lot of fun playing this game. Very polished, nothing to criticise here. Could definitely be released as a full game after adding more levels.

LikeReply
Knights of TruthSubmitted1 year ago(+1)

This is one of my favourites of the jam. you done really well, great visuals nice idea and good execution on  it with the level design!

Glad you like it! Thank you for trying it out!

Honestly, visually one of the better games i have played during this jam. made me want more levels. lol can't wait for a story mode. wow, such a simple idea but you really built on the theme of the jam.

Thank you so much for the compliment! We wanted to make more levels to but simply did not have the time, making sure the levels we had were playable and without bugs took us long enough! Stay tuned ;)

Oh god, I can't tell you how much I love the visuals in this game. This is fantastic! The game experience is tight and exciting. Had a lot of fun playing it. Overall, this is a well-polished game.

But I do have to point out that the control is a little strange. While we use left click to split the drone and the speeder, the combination is done by mouse moving. However, my instinct is that these two operations should be done in the same way, because it's more like mode-switching. This also makes combination much slower than splitting and I believe this breaks the rhythm of the game a little bit. (But maybe this is just my own preference)

Submitted
Getting Over It Together with... Myself!
LikeReply
TemperinDeveloper1 year ago

Thank you for playing and the feedback! It is definitely something to look into, you are not the only one mentioning it. Glad you liked it!

Really original take on the zero-G racing genre. Love how splitting and joining of the vehicles adds layers of gameplay and invites to some really clever level design. Great job!

Thank you so much for the compliments!

This was so fun, there was a couple spots that were extremely tough for me to collect the rings, but overall a really great game. I would love to see this developed further.

Glad you liked it There are definitely plans to make it a full release ;)

Really cool take on the retro racer game.
Things that I really liked:
- The presentation of the game is phenomenal. Everything is on brand with that "vaporwave"/90's retro low poly look. And it works really well for the game.
- The control scheme is great. We (the gamers lol), have been conditioned through years of playing games to build a fluidity in using the WASD keys and the mouse together. This game leverages that precognition allowing you to easily build an understanding of the control scheme.
- The game slows down the speed of the two crafts when apart, and speeds up, when combined. This is great for 2 reasons. One, its harder to control two moving vehicles at the same time, than it is controlling only one. At the same time, it makes sense in-world. When the two crafts join together, they use their "added" propulsion together, thus making the green craft faster (Also, really cool that a blue and yellow vehicle combine together to make a green one).

Things that could use some tweaking:
- The combination of the two crafts should be almost instant. A game should never feel like it is the reason that the player failed to do something. Failure should always feel like its a product of a decision the player made. When the player makes the decision to "combine" and still dies, it feels like the game is cheating them out of their decision. When the game requires the player to make split second decisions, and then doesnt act on those decisions immediately itself; to the player, it feels like they made the right choice, but the game decided to act too slowly to resolve their choice.
- MORE BLOOM. I love the look of the game so much, that I want more of it. Everything should be bloomy to an extent. The ships should have glowing strips. The rings should be pretty much all light (yellow is pretty good, but blue and green need MORE).
- Some more post processing? Things like scan lines?
- A little more "juice" when collecting rings? This could even be achieved by just putting in a looooot more rings. Because it "feels good" to collect a lot of things!

My man thank you for your very thorough and detailed review. there is wealth of information here that can be used to improve the game! Really thankful you were able to try our game and take the time to write up argumentative statements for all of the points you mentioned.

PLEASE, I NEEEEEEED it

We are seriously considering adding to the game! thank you for playing and glad you liked it!

Glad you liked it! Thank you for trying it out!

Great work. Absolutely loved the visuals. Getting in a flow of splitting and combining was a lot of fun!

Glad you liked it! Thank you for reviewing the game!

It feels sooo smooth and fun to play! Great job !!

Glad you liked it! Haha shit time to reconsider our concept ;)

I'm a sucker for a good synthwave/vaporwave aesthetic, and this game does it well!

The connect/disconnect was definitely a unique interpretation in this game. And like I already did tell Sleeper_, the transformation does last a little too long for some of the connections to work probably and it felt like it was not my fault for the crash. It's always best to keep animations snappy and functional and not let it overtake the action, as tempting as it is for us animators! Games like these definitely need a lot of direct control after all.

Other then that, it was a really unique and interesting game to play. Took me a few to get grips with it. Great work, and my gosh does it feel polished for 2 days!

Thank you for the feedback, we did playtest it ourselves but that is not the best reference :D The contrast between merged and unmerged is something we would look at. Thank you for the massive compliment!