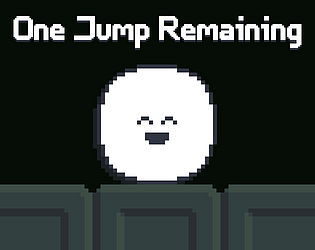 So much fun to play, very intuitive yet deep to have fun across all levels. BTW there are so much levels. Feels well polished as well, its just awesome!

A really cool game! Pretty addictive and polished , could be a perfect mobile game .

Submitted
IT'S MINE
LikeReply
Zach777Submitted3 years ago(+1)

One of the best game jam games I have tried so far.
This has a lot of potential.

Very fun combination of golfing and platforming. I like the sound effect that adapts to your height and speed. It's a nice touch! :D

Nice cute character, and physics seem to be pretty reliable.

I'm not sure if being able to walk around adds a lot to the game, but definitely had some fun with the game, good job!

Fun game, lots of levels, I really like the character :D

This was a very cool game. And there's a lot of levels. It's impressive!

You made a lot of juicy effects for your ball (screen shake, face expression, etc.) and it's pretty charming.

The "second" phase is challenging and give some difficulty while the "first" phase is more a big tutorial to understand the mechanics.

Great golfing game!  The artwork and concept are very nice!  The only feedback I'd have is that the "reset" button is quite big (played in browser) and got in the way of one of the later levels, and it also wasn't clear at first that clicking farther away from your character resulted in more force. Otherwise, great polish and execution!

This is a super fun game!

I found myself quickly getting used to physics and burning through levels which was really satisfying, and the trails you leave help you correct your jumps on further attempts, brilliant! And the character is cute!

this is amazing i gave it 15 stars

come check out my game 1dShooter

Just finished playing through, I had a blast!

The design of the levels, especially the early ones, were fantastic. The way they introduced mechanics in a safe environment and slowly escalated the danger really made me feel like I was getting the hang of it.

The lines that are left behind on failed attempts made failing a level almost as enjoyable as completing it. Instead of each life being a hard reset you are building up this web of bouncy failures which I found really fun.

The gravity was also tuned nicely. Having it be slightly floaty ensures that you feel a real sense of tension as the lil guy flies through the air closely avoiding spikes.

I did notice that when sliding down a wall the character would stick to it instead of falling. That might be part of the buggy tiles that the splash-screen mentioned. I didn't find that this impacted game play at all so it is nothing in need of an urgent fix.

As a final note, the main character is adorable. I know we aren't allowed to judge based on graphics but fantastic work on conveying his emotions!

Thanks for making this :D

Thanks for the detailed feedback :D you made my day!

I'm glad the only bug (so far) is non critical, but I think I might use this as a mechanic for the player's advantage in the future, instead of removing it.

I like how it turns a platformer into a golf game.