I just bought the game hoping to play it later, because I only have 64-bit mac myself.

BUT, when running from within the itch.io app, game works perfectly. I played for about 10 minutes to test things out and everything seems fine.

Wow, that’s a lot of quality feedback, thanks! I’ll make sure to get to it again in the future.

There are a bunch of problems with current balance and execution of some things, yes.

To address some of what you said - bugs not eating fungi is actually a bug (ha), as well as, if you noticed, a bug that constantly appears from the right side of the screen. Those aren’t supposed to happen, and overlapping sounds bugs produce actually telegraph them eating fungi. So I didn’t fix overlapping sounds, since it wasn’t the highest priority, as in my tests this amount of bugs would never appear at the same time.

I want to expand on the game in the future, but for now, if you just want to play the game, I’ve created a fixed version, which can be found here:

Thanks again for your feedback, I might consider some of the things you proposed in development!

Thanks! I wish your dog well!

This is a very nice idea! Platforming part is nice, and I think it would be overall a lot better if there was only platforming and some puzzles with an arrow. Combat is very simple, and it's ok, but there's too much encounters, so I thought I should note on that it's a weak part of the game.

Anyway, you did a very good job!

This is a very nice game! I like the idea and how it plays out. These holes are so simple but look very effective, and Space Jam arm is just hilarious. Good job!

Thank you very much! I'll be sure to check your game today!

A very fun idea and great execution! I really enjoyed playing this game!

Nice idea. With this audio and visuals the game feels very unique and weird (in a good way). For the feedback - it's not very clear of what to do from the start, and, probably, the pixelation filter is cranked a bit too much. Otherwise it's a very nice little game!

This is a very nice game! Great job!

I really dig the art style of this game! The combat is a bit hectic but feels nice too.  Good work!

Color or lack of it plays a big role in the gameplay, as you can move between filled areas and destroy specific enemies only on white or on black. But I agree that the theme isn't fully explored here.

Anyway, I'm glad you enjoyed the game, thanks for playing!

You can pause and unpause with ESC or Start button on controller. But I forgot to add an exit button, so it's alt+f4 for now, sorry :)

It was ok, since there were more puzzles ahead ( which I though I solved, but I had no key) !

I didn't read the description, and ended up at the end of the game with no key, but redid everything, and regret nothing!

The art style and music are outright psychotic (and amazing).

Nice cute character, and physics seem to be pretty reliable.

I'm not sure if being able to walk around adds a lot to the game, but definitely had some fun with the game, good job!

Blasting through the line of enemies feels very nice, and the game itself is pretty addictive, would love to see this project grow!

The art style is amazingly good, and I liked how you made things ramp up with small touches later in the game, like camera moving to the beat.

I'm not sure if my reactions are bad, but the first bit didn't really feel fair, and felt like I had to memorise it. Especially when I saw the attack, and wanted to move away from it, but moving tile was too far away, and I basically waited to get hit.

But, anyway, this is a solid submission, great job!

Thank you! Unfortunately the game is not particularly designed around the theme, more so inspired by it, but I'm really glad you liked it! It looked more fitting on paper :)

Reply
Pixel Fx Designer community · Replied to Kronbits in Problems to run on MacOS ? Check this solutions.
quadape3 years ago

I'm pretty sure I'm on the latest version. I've downloaded it today with itch.io app.

I tried to download directly from the site, and it has the same problem.

I'm not sure, where can I check the version number, but I assume that it is the latest.

Hey! This program is very nice, I'd love to utilize it in my work, but I'm running into an issue on OSX High Sierra 10.13.6.

This is an error message I'm getting when trying to add custom image: 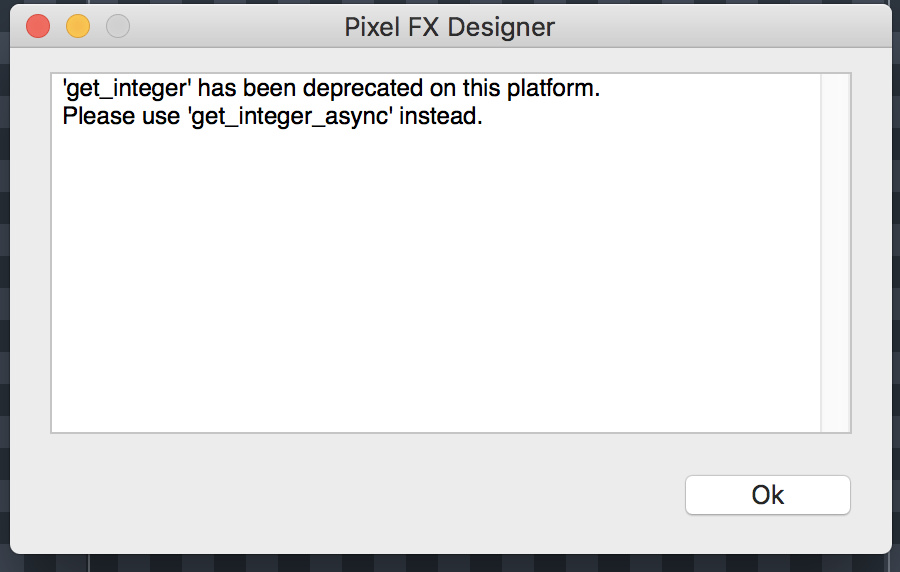 Hope this gets fixed, thanks!

Hey! Really wanted to play this, but experienced some bugs during the game. I basically drop through ground, or something like that, sometimes dino's legs drop through, and it's legs are spread across the entire map. I'm playing on Mac OSX 10.13.4.

I've recorded a video for you to see, what is happening, althrough, this happens not only on these geyser spots, it can happen at random anywhere.

Thank you! Sorry, I haven't answered for 4 months! As I posted earlier, the project was lost some time ago, so I don't know, if I'll be able to recover it and upload it to lexaloffle. Hope you've found a good example to learn from

Sorry for not answering for so long. Unfortunately, I've lost all the project files, and I don't know, if I'll be able to recover them, but if I will, I'll let you know. Thanks for your interest in the game!