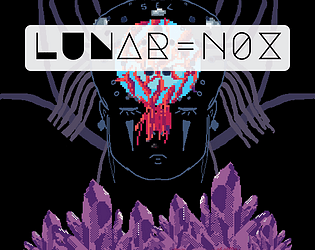 Theme interpretation
Our interpretation combines the last-ditch effort to preserve the life-force of a dying planet with the setting of a sentient moon that shoots back when it realizes its resources are about to be plundered. Sometimes great accomplishments require great sacrifices.

Wow, the art and music is wonderful, and it's a whole lot of fun too! I wish there was the ability to slow down one's movement, such as holding a button to go slower, as even while using the time ability there were moments where my ship would just go too fast when trying to navigate small gaps. That could be more a lack of skill on my part, of course. Loved playing this!

I'm so pleased you enjoyed it! I really wanted the feature you suggested as well, and I was in the middle of implementing it too, but then we ran into some last-minute bugs and had to drop it. :/ It will for sure be included if there's a version 2.0!

The music was really good,the gameplay was solid and the art looks cool :)

One small issue that I noticed (not a big deal) is that i could still move and shoot after losing all lives.

I didn't really play these types of games before the jam, but I've grown fond of them :)

The art style is really cool, and I thought it was a fun shmup. My only feedback is that it felt weird having the bullets be a continuous stream. I felt like a powerup you would normally get later rather than your starting gun. It made it super easy to kill the enemies. Unfortunately, it didn't make it any easier to dodge the bullets. Ha ha. It was a lot of fun though.

Love the music, and the art style is really good. Great work!

The music was absolute killer. I tried to find it in the GitHub repo so I could download and listen to it. Please put it on Spotify already :D

I loved the time slow function, and the sound effects that came with it. It was really difficult to avoid all the bullets, so I am happy you had that feature available. I am also glad that the hit box of the main character is small. Because I think I actually hit more bullets than what was registered.

Thanks for your kind feedback! We're currently working on figuring out the best way to distribute the music more broadly, so stay tuned on that front.

Incredible visuals! The artwork was so well done, props to the artists!

The idea of adding bullet-time to a shmup was really cool. There were times where I felt like I had no choice but to take a hit even with the slip time activated but that's probably because I didn't destroy the threats early enough. Another idea I had during playing was that maybe the slip time mechanic can be a trade-off. As long as you're shooting it won't recharge so you have to stop shooting to get it back. That way the player has to decide when to be aggressive and when to be defensive. Just a thought!

Very cool game overall, had a lot of fun with it.

Ah, the recharge trade off is an interesting idea! I'll add it to our list of features for v2.0 consideration. Glad you enjoyed it!

It was really fun to play! I liked the bullet hell aspect to it, and liked how the music lined up with the levels! Graphics were really good. It was a little hard to determine where my health was for a particular life.

Very smooth to play -- loved that 8-bit vibe.  I liked how the game starts out seemingly easy before suddenly becoming an actual maelstrom, giving that "not what you expected, huh?" kind of feeling. If I may give one suggestion, it is to consider adding different kinds of projectiles, such as explosives or laser beams in order to allow more experimenting (just my two cents). Other than that, I think it's a great game and would blend right into the arcade world. Nice job, guys!

Nice game with good graphics. I really enjoyed the art style. Nothing new, but a solid space shooter.

Submitted
Save the Sun
LikeReply
SorHasSubmitted132 days ago(+2)

Really like the art style, as other said would like a little bit more contrast to make the ship and bullets more visible but it is really beautiful to look at. Good job.

just one point update the graphics so that the bullets, and ships are more visible they blended in the background

I really liked the slow motion mechanics, it is very useful to avoid the projectiles, I just had difficulty seeing the ships, both mine and the enemies, but the game is incredible

Great music and fine sfx as mentioned, but had a lot of trouble seeing what was happening, mostly because the ships were pretty close to the same color as the background. On top of that, the clouds actually interfered with visibility, which made it nearly impossible to not take damage at points. Overall, I liked the idea and the game generally, especially the music, but had a really difficult time playing the game. Would be nice to have larger sprites generally next time - I recognize it is a shoot-em-up type game, but doesn't mean it shouldn't scale up properly. In any case, nice work!

Edit: Oops! That was my bad, didn't see the expand button. :D It scaled up fine, so ignore most stuff about it being too small. I still found the contrast to be too low, but I changed my rating after finding the expand button in another game.

Hi BackAt50Ft! ProgrammingIncluded here. Really appreciate the detailed feedback, and having discussed with the team, we all agree. We've gotten a couple comments about the visuals and definitely want to make some tweaks to the art and colors to make everything a little more sharp and playable.

Hope you enjoyed playing the game and I hope it has made your day a little brighter :)
Special shout-out to @cpjttk for the amazing custom soundtrack, too!

*still dancing on the music*

Submitted
Are you there?
LikeReply
ProgrammingIncludedDeveloper132 days ago

Dancing along with ya!

I really loved the music and sfx! Fun to play, and good cohesive aesthetic. All around a pretty decent game c:

Very fun game! Gets really intense! I got 21124 as my score on my first attempt 8D

Nice game, got to the bass drop of the song :D