A jam game for Github's GameOff 2018!
Submitted by BigHandInSky — 9 hours, 30 minutes before the deadline
Add to collection 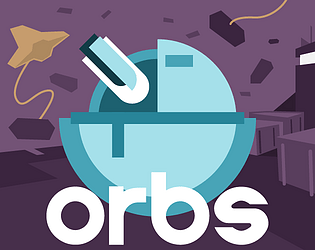 Theme interpretation
Hybrid gameplay for the player:
- they can move around the ship in space
- or they can tether and clamp onto the ship
- when clamped they can shoot

So a mixture of physics space movement meets a turret emplacement game where you are the turret.

Great concept! I really like the UI and graphics overall. The bad thing is that I think it's pretty easy to not understand what's going at first sight (I felt a little bit lost :S).

Check our game if you have time! :)

Controls can be a bit tough to learn at start. The game is very robust, had no problems! 3D models look really nice! Music / sound effects are perfect! Amazing work

Love the unique controls, takes some getting used to though. Really polished for a jam game. Well done!

What a great entry, I like the experience of defending the cargo it was pretty difficult with so many pirates around there ;-)

Complex interesting and enjoyable is what I can express. Thanks for making!!

Incredibly complex for a Game Jam project. The presentation, immersion, graphics, sounds, UI are all very impressive. The ship controls is a bit of a learning curve but once I got the hang of it it was fine.

Excellent job for a one month jam.

Check out my game if you have some time. Cheers :)

I love how well-done the computer is! The game itself is pretty complex and the slow movement + fire rate adds another layer of complexity to the gameplay.  I didn't expect to see this kind of a game in a jam. Good job man!

I should've made the help similar to yours. I see what you meant about our "orbs" being similar :D

I love how immersive it is with the com system to the left and the fully fleshed-out computer interface. Space shooters have always been a favorite of mine, and this was a super unique one. If you plan on continuing to develop ORBS after the jam, my only comments would be that perhaps the cursor should be permanently visable on the screen with the camera and gun rotating to face it, rather than the cursor seemingly being stuck to the gun. I saw that I could move the cursor for the gun while I was in the process of attatching the ship to a surface, but the camera wouldn't rotate to match the cursor's position until the animation was complete. I also agree that faster projectiles would make combat a lot easier and more tactile feeling-- the sound behind the firing has a lot of power, so the force of the projectile should match. All in all, great game!

Great graphics and sound effects, bonus points for being adventurous with the gameplay. The UI is good too. Controls and gameplay itself are clunky (too many restrictions like not being able to fire unless you're a turret, fire rate is too slow AND your gun can overheat) but overall apart from these things it's a well polished piece of work.

Congrats for this, this is a massive amout of work!

I got a bit frustrated by the controls of the ship, but I guess that is somewhat part of the game :p It got waaay better when I plugged in an XBox controller though (kudos for dealing with multiple input systems btw).

I still found it extremely hard to hit enemy ships. They were simply too far away, the projectiles are quite slow, and the time it took me to get closer they were already on their way out :/
And I got a bug where I got like -2 million credits after finishing a mission :o

Amazing job on the UI and the 3D scenes, the menu is quite complex and neat. The simple explanation text at the beginning is a nice touch to get into it!

Anyway, good luck with the ratings ;)

Aaargh I knew I was missing something in my playtesting! One of the big features I missed out putting in was a targeting/prediction UI for aiming at stuff, I'll be sure to add that in with some beefier faster projectiles, thank you for the feedback! ( and sorry about your bank balance :C )

Haha no worries, thats perfectly normal for a jam submission to have some weird bug left (there is a reason why most released games have several months of beta testing!)

The interface is very busy, and the gameplay is challenging. The idea is really neat and I played it several times.

Submitted
A boy and his mech
LikeReply
BigHandInSkyDeveloper4 years ago

Thanks! If I may ask what did you find was the busiest part of it?

LikeReply
Side GroupSubmitted4 years ago(+1)

This is an extraordinarily complex game for a jam, so pat yourself on the back.

Beautiful visuals too. Sometimes some gameplay systems were a little unclear to me (probably because this game could be a full length game but it doesn't have a full length game's worth of tutorials due to being a jam submission) but I'm honestly pretty blown away. Incredibly impressive stuff.

Thank you, I was worried the tutorial text wasn't enough, it was the last thing I hastily put in on the last day :S Can I ask what gameplay systems were left unclear? (For a small update next weekend after I rest up)

LikeReply
Side GroupSubmitted4 years ago

Early on I hit escape and suddenly found myself in the second menu system (at the computer terminal) and had to figure out what was going on THERE before realizing I didn't need to be in there at all. It was a confusing intro to the game.

Good luck with the updates! And hey, feel free to drop by and check out our game too. ;)

Aaah I see, so one thing I wanted to add was a "please login" type fake screen to the terminal, and there I can add a "are you new?" tutorial page to clarify things, do you think that would help? (Like a small page/page/page like with the intro to the game)

LikeReply
Side GroupSubmitted4 years ago(+1)

I think that could definitely help!