An (un)finished puzzle game
Submitted by The Gear Shift — 22 minutes, 10 seconds before the deadline
Add to collection 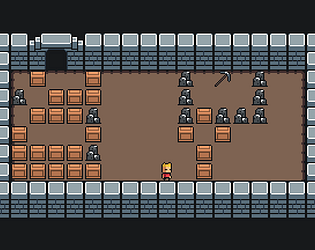 Ranked from 56 ratings. Score is adjusted from raw score by the median number of ratings per game in the jam.

Clever puzzle designs! It builds upon a simple mechanic but gets intricate while progressing. The sprites are cool, a very fun game overall! Best wishes! :D

Thanks very much, I enjoy all the feedback!

I really liked the puzzles, kind of like that old game Sokoban but with a twist! The sound gets a little repetitive, though - I'd improve on that.

LikeReply
The Gear ShiftDeveloper130 days ago

I really appreciate the time you took to play my game. The audio and sound were done under an hour since I only had that much time left into the jam, sorry about that.

I'll be sure to checkout your game too! <3

Played and rated.The puzzels and the art style  were  realy great.

Submitted
Lie to win
LikeReply
The Gear ShiftDeveloper130 days ago

Thanks so much for the feedback, it really means a lot! <3

oh! that was really fun!!

LikeReply
The Gear ShiftDeveloper131 days ago(+1)

Thanks so much! I'll be sure to play your game! <3

Got stuck at one point because I moved the crates incorrectly. Had to start back over from the beginning. Should be a way to reset only that level.

Submitted
The White Door
LikeReply
The Gear ShiftDeveloper131 days ago

Thanks for playing my game! There is a way to reset the level, its spacebar. The controls are below the page if you scroll down, no biggie. I invite you to finish the game if you want, I would really appreciate it!

I'll checkout your game since you took the time to play my game. <3

Hi, so i played the game and now im gonna comment about it. At first when i opened up the game and started to press the wasd keys there was no response at all and whenever i pressed the space button the dialogue would just repeat itself and because of this i thought the game was broken and almost quit until i tried the arrow keys instead. There's no music, no pause screen, nothing to give me the impression that the game is actually running. No start menu, nothing just some levels. Now, i understand making levels takes time but still.. While it's true that the art is very good and the sound effects are cool and the overall feel of the game is very nice and polished, all of that is ruined by the lack of the latter. There's no controls menu or a tutorial level, which is very important for a puzzle game, else how is the player gonna know what to do. Not to mention that the game doesn't fit the jam theme, no deception involved whatsoever. Hope you keep this in mind for next time. Cya!

Sorry about that. There are controls on how to play the game below the page. I really only had about 2 days worth since I attend college, but I'll be sure to add a tutorial in my next games! I invite you to try again and try to reach the last room if you want. You can break the stone with pickaxes and move boxes when you push them, but only if they are not block by any other block.

I'll be sure to play your game since you took the time to checkout my game. <3

Thanks for the feedback, I really appreciate you playing my game! <3

I'll be sure to checkout your game as will. : )

Cool game! this is a cool little puzzle game that was challenging but fun. the only things i would add is a variety of footstep noises and some music. But overall a good game.

I really love this little puzzle game. I hope you'll expand it :) It's simple but very fun to play. Very good entry.

LikeReply
The Gear ShiftDeveloper133 days ago

I really appreciate the kind words! <3 I'm thinking about making a sequel or expanding on it, I don't know yet.

I will checkout your game entry for the jam too! : )

Very fun! I spent a lot of time in the last empty room trying to see if there was any secrets but I couldn't find any lol. Great job

Yeah, sorry for the tease, lol! I'm glad you enjoyed the game and thank you for the feedback! <3

I'll be sure to checkout and play your game!

Thanks for the feedback! I will play and rate your game too! <3

The game is just awesome. I really love the graphics! the audio is also great !

I had fun playing this game. I was stuck at 2 levels but then i was really satisfyed when I solved them!

great job with the gamedesign.

though i dont really understand the theme but that doesnt matter.

keep up the great work!

hope you will get a look at my game too :D

Submitted
The Room of Fools
LikeReply
The Gear ShiftDeveloper133 days ago

You're awesome, thanks for playing. I really enjoy the feedback! <3

I absolutely adored your game, I love Sokoban style games and yours wass super well done. One question, is there anything after the empty room? I finished and I was craving more : )

There really is nothing after the last room, sorry for the tease <3. I really appreciate you for playing my game!

Very nice game and some levels were not that easy to complete but finally I finished it. Well done!

I'm glad you had fun with my game <3! I will checkout your games!

Pretty funny, I made it all the way to the end. The difficulty curve was good. Though, the walking sound is a bit annoying. Perhaps you can also add some music.

Thanks for playing my game! I know the sound was annoying, I only had an hour to put sound. I'll do better to have better audio in my future games! I just played your game, I really like the CRT Monitor effect!

Thanks, but what did you think of the gameplay and the difficulty curve?

There was the bug where the turret didn't aim properly, but the curve was fair. Great game, I still enjoyed!

Cool game, I liked the puzzles. I kept on playing after the last room for ten minutes to see if there was an ending, guess I'll never really know ;)

The graphics are nice.

The sound fx are cool but hearing a sound every time you move is a bit annoying after a while.

Nice one, good luck for the jam!

Oh you missed half the game. You have to glitch through the wall in the 'last room' to get to tons more levels.

Just kidding, or maybe not.

I get a lot of comments about sound, sorry about that. I only had an hour to implement audio and I didn't think much about it. Thanks for checking out my game and I'll be sure to play yours too! : )

solid grasp on the presentation, and a perfect sort of entry for the jam. Only grip being the movement sound lmao, other than that I love this game .

Yeah, sorry about the movement sound. I didn't really think about it because I had only an hour and just stick something in. But thanks a lot for the feedback! <3 I'll be sure to checkout your game!