Defeat goblins for reach the goal of freedom!
Submitted by Lugu — 4 hours, 14 minutes before the deadline
Add to collection 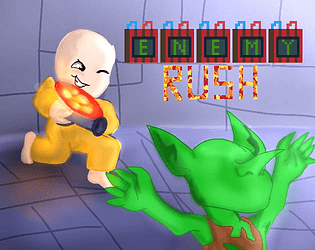 How does your game implement the theme? (If your game doesn't use the theme ignore this field)
there is a bomb stick to the player, if a timer of 10 seconds, when the time marks 0, the player dies.

What was the size of your team?
the team consists in 4 people

I really liked the opening presentation but the cover art and opening art don't feel cohesive with the style of the game world which is done in a pixel art style. I also couldn't tell the walls were walls. I thought they were pits that I could fall into until I saw bullets bouncing off them.

Since the game has an opening story component, I feel compelled to know what's going on but since I don't understand, I feel lost in the connection between player and avatar and how that fits into the world.

The general effects, shooting, enemy blood spats a,d the camera shake are good. I like the HUD. It's compact, and easy to read.

The lack of any audio hurts the game. I know in the credits it says there was a musician, however, I tried on two separate machines and neither would play the game's audio so I have to assume it's the game.

Since I couldn't hear the audio I assume there are no sound effects but that would definitely liven things up.

I can see the potential here.

Thanks for the feedback, i really don't know why the music and sound effect didn't play to you, sorry that this happened.

OK, so I was reading the comments and I decided to see this game to the very end.  It's ok, I'm not a big fan though.

My biggest problem is that I'm not a fan of top down shooters. I've been in too many jams where they feature these games with enemies with magnet AI and you keep shooting them to get upgrades.

The only way I was able to beat the game was to stay at the bottom left corner of the level and exploit the games pathfinding. Not really my idea of fun.

If you make a game like this in the future, please give the enemy something else besides making them faster and faster.

Thanks for the feedback, definitely i'm going to make a better AI and new types of enemies, thanks for taking your time to play and rate our game!

Nice one! I had fun playing it, shooting the horde was really fun and the upgrades made a noticeable difference. It could be clearer what exactly they do, but overall, it didn't stop me haha
Well done! Stay funky,
Dez

Thanks for the feedback, i'll add a more intuitive UI as soon as possible.

Nice! Good luck for the next update!

Cool! I enjoyed playing it, audio is catchy and it felt like the enemy AI was just right for understanding how to avoid the horde but still difficult enough to make it challenging.

Thanks for taking your time to play our game avd rating it!

Very quickly turns into a surprisingly fast-paced horde shooter. The AI manages to be both smart when it comes to flanking but also susceptible into being manipulated into doing nothing sometimes if you hide behind a wall and move in opposing directions quickly. Nice intro, too.

Making the AI better will be one of the priorities of our late game jam development. Thanks for the feedback, and for taking your time to play our game!

Great intro and gameplay is really satisfying. Upgrades are pretty good and I really liked the audio. Really good idea how to incorporate a theme. Great job!

Thank you for taking your time to play and rate our game, our team put a lot of effort and teamwork for develop this game, i'm glad you liked! And thank you again for the feedback.

Thank you for taking your time to play the game and rating it! i'm glad you found the gameplay satisfying, that was the idea i had when added the sound effects and screen shake! And thanks again for the feedback.

Wow you took the effort to put an intro! Props to that!

Thank you, our illustrator have all the credits for that intro. Thank you for playing the game and rating it.

Nice intro and fun game. Not the best graphics but the gameplay is great and that is what truly matter

Thanks fot taking your time to play rate our game, i'm glad that you liked the gameplay and the intro, and i'll try to improve the graphics a little more when the jam is over. Again thanks for the feedback.

Had a lot of fun getting all the upgrades and blowing them away, nice job!

Submitted
Panic in the Dungeon
LikeReply
LuguDeveloper1 year ago

Thanks for taking your time to play our game a rate it, the upgrade was the part i had the most fun implementing to the game, i'm glad you liked it, maybe adding some new ones when the jam ends.

I'm glad that you enjoyed the game and the cutscene, the illustrator put a lot of effort in it. Thanks for taking your time to play and rate the game!

Great game! I liked the intro cutscene and enemy variety, but a bit more clarity on what the upgrades  do would also be great. I also run into a bug when trying to buy the first upgrade, forgot to take a screenshot of the error message though and I haven't been able to recreate it. Great game none the less, I enjoyed it!

I'm glad you enjoyed the game, our illustrator did a great job in the cutscene. after the jam i'm going to make a more intuitive upgrade system and fix the bugs found. Thanks for taking your time to play the game and giving your feedback!

creative use of the theme. and nice intro cutscene

Thanks for taking your time to play the game, glad you liked the cutscene, our illustrator got alot of work into it

Hey this is a pretty cool idea for the theme implementation, but it's a bit easy to keep the timer at 10 all the time, also I wasn't really sure what the upgrades were doing from the images. The game got really hard after a while, but still I had fun :)

thanks for the feedback and for your time playing the game, in a later version of the game i'm going to improve the visuals, especially the UI to be easier to understand.

The idea is interesting, enemies don't shoot bullets. Visuals are a bit lacking, but the game doesn't look bad. I really like that the bullets bounce.
But the game is definitely too difficult, enemies spawn from all sides and soon there is nowhere to run and you just die. The bomb does nothing because the only moment it reaches less than 7 is at the beginning. Also I think reloading is not needed in this type of game, since you have unlimited ammo and 1 weapon type anyway.
Overall the game's good, but it definitely needs more content.

Thanks for the feedback, and your time for playing the game, your comment will be taken account when we make changes to the game.

but the effects do (mostly the screenshake and particles)

and the gameplay is still good

Thanks for the feedback, when this jam ends, i'll try to implement new enemys with new behaviours, maybe some that shoot projectiles, that was my original idea.

thanks for the review and for taking your time to play our game, the art of the game is one of my favorite parts of the work we've done.

I'm not sure how you managed it but the gameplay in this was just... SO SMOOTH. Like it felt like.. I donno man, nothing else has been this great. Maybe just because the framerate was so good. Good job!

thanks for taking your time to play the game, we put a lot effort into it, i'm glad you enjoyed it.

Nice, I really like the audio which sounds like an old Adlib computer game.  Those pink monsters are really hard!

thanks for taking your time to play the game! It was a really fun experience working together with my team in the music and sound effects, i'm glad you liked it.