Match shapes with the power of love. <3
Submitted by MrQuallzin (@MrQuallzin), iv2b — 10 minutes, 58 seconds before the deadline
Add to collection 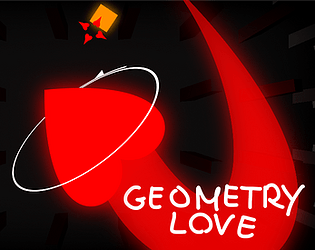 Movement feels a bit too jumpy but once you get the hang of it, it gets fun :D

The audio fits the game as well

Played and had fun :)
Rated

the controls are hard to get on the start, but with practice it becomes natural, the aesthetic stands out, and the music fits nicely. I like it.

Hey. Nice graphics and effects. The sound also is high point. The controls are difficult to get and I didnt get why you sould take objects with the back part... But it was a good game. Congratulations.

We thought it'd be funny to suck up shapes with the butt of the heart. And thanks!

I really like the idea of the game. The controls are a bit hard to learn. The visuals are really great!

I really enjoyed the aesthetics of the game! The controls were a bit unintuitive , though. I feel movement with WASD/Arrow keys and aim with mouse would have been better. Especially, since you have enforced a time limit, controls should be as smooth as possible. I loved everything else about the game. Really polished graphics and interesting music make it one of the best looking games in the jam!

Played and rated ! Hey, loved the simplicity of the graphics.They look polished. However, I thought the menu/option buttons could look more like buttons. I found the game a bit hard in general, but that may just be me. Nicely done.

Submitted
Note to self:
LikeReply
iv2bDeveloper2 years ago

Yeah the menus are... extremely minimal. I tried a few options and while they felt more usable they also looked generally worse, i can see if i can improve them for 1.2.

The game has been generally perceived as hard, which is fair since i didn't include a tutorial (besides the GIFs and the video), the difficulty goes 0-100 immediatly and it's tuned around my performance during testing.

For 1.2 we're making it easier to turn around and throw shapes by throwing upon releasing the mouse button and disabling movement while it's held down (so you have a lot more time to aim and it's easier to do), which seems to be the biggest complain in terms of difficulty. :)

Glad you enjoyed the game. ;)

very good concept !
I found out quite easily how to play, it's not that hard, not that easy easier, the music feels good, some sound effets that are great...it's a fun arcade game, nothing more to say !

Hey glad you enjoyed it! ;)

The thumbnail is really mysterious ;) The learning curve may be a bit steep but it became fun when I get used to (very impressed by the 80k high score). I think you should definitely put an online leaderboard. Overall, I liked the tight physics, UI, particles and SFX.  Good game!

Very nice graphics and gameplay. I would really like to play this with a joystick.

Playing with a joystick would really be fun!

I don't have a joystick but it shouldn't be hard to make it joystick-compatible at all. :3

As far as scores go, my highest is 79k (added a video in the game page), highest on stream i've seen was 15k, highest off stream from a non-developer 38k.

Because with linearly increasing score you would need to complete ~80x what I did which seems insane.

Score gained per match does increase over time:

Difficulty scales over 3 minutes, reducing time gained per match (from 8s to 2s) and increasing score gain (from 1x to 3x).

Then there's also a second bonus based on the number of shapes matched which scales slowly but infinitely (linearly).

Submitted
What Happend to Mary
LikeReply
GeriBPSubmitted2 years ago(+2)

I was quite confused at the beginning but once I got the hang of it it turned out to be a very fun game!

Good job and congrats on all the art and polish!

Submitted
Why do you love?
LikeReply
muro1Jam Judge2 years ago(+2)

Amazing game with very nice particle system and an awesome game mechanics. Took me a while to figure out how to play but at the end i enjoyed it.

Really creative , liked the idea. It looks polished. it is a hard game but really fun and engaging as well. Btw i liked the sound and the graphics. But steering is hard it would be better if you use wasd keys i think.With current controls it is hard to shoot. Also It would be better if we can move while absorbing. Great work i liked it so much overall. One more thing even if the controls are hard it is still fun to play :)

An amazing game, the quality is insane for a gamejam, i enjoyed it a lot, even if i'm very bad at it !

Thank you very much! We should have a better tutorial soon to help everyone with the tricky controls.

Steering is a little hard but concept and quality is awesome

Steering is disabled while absorbing to incentivize aiming, but it should be responsive otherwise.

Are you having difficulty with it at all times or just while sucking in shapes?

I agree, part of it is unintended:

The idea is that you move toward your target, then turn around and bump the shapes together by turning around as you slide forward.

During the forward slide you'll have a reasonable window of time to aim in case you started turning too early, which also has the advantage of boosting you forward to keep the pace up.

During development it was possible to hold RMB to remove drag while carrying a shape, which helped in this regard (as you didn't have to stay within the deadzone while aiming for finer controls) but didn't feel intuitive and went against the fast paced design (as it would lead to a slower approach by rewarding long range throws).  That's why it was removed. On a side note being unable to reliably perform long range throws plays into the blindness portion of the theme, where the speed and agility of the player are offset by the low vision range (thus having to rely on the radar) and throw inaccuracy (thus demanding precise movement from the player).

We'll soon release an updated video as people struggle with the controls at first, alongside image tutorials to showcase how the game is designed to be played.

If that doesn't help enough we'll make it easier for the player to match shapes and move around while doing so.

Thank you for your feedback. :)