You are Cupid's eyes, find the demons in the maze and give them a love arrow
Submitted by GoedWare (@goedware) — 12 hours, 14 minutes before the deadline
Add to collection 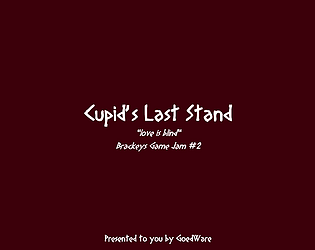 I enjoyed playing your game a lot. The atmosphere felt very nice and the game had a nice level of difficulty and strategy needed to beat it. The movement felt a bit odd and clunky but after playing a bit I got used to it. I really liked that lightning effect on the floor that looked very cool

Thanks for your positive feedback! Nice that you enjoyed it :)! That was my goal of course. And yes, the movement could be improved for my next jam. Luckily you got used to it :)!

Cool game, i enjoyed it! Graphics are dope also

Nice game! The graphics look nice, and I especially like the particle and moving floor effects. I would have liked it if you'd have to aim yourself when shooting though, I think that would make the combat feel a bit more active. The audio really helps the dark atmosphere! :)

Thanks for the feedback :)! And thanks for the particle effect & audio compliment. Hope you had fun playing :)!

Cool game :D
I think the character can move faster though. The map is so big and I don't know where am I going XD

Submitted
All I See Is You
LikeReply
GoedWareDeveloper1 year ago

Thank you for the compliment :)! Yes, the movement could be a bit better ;) Thanks for your feedback.

Overall it's a fun game! Appreciate the fact, that you wrote it into context with greek mythology, I mean you gave it a story, which most of us here didn't manage... Love the way you made it seem like a retro game! Sound effects a bichin!! The art is 95% balanced, and the game mechanics has 1 setback: the acceleration interval (0 -> full speed & vice versa) is way too high, and I bumped into nearly every wall, which braked my smooth flow and killed the otherwise big fun...The main reason why I died was because of this too, couldn't brake in time, but maybe that's a hardcore retro feature, idk. My game is somewhat similar, but without the demons :))

Thanks for the nice words :)! I also like that you could appreciate the context :). Yes, the moving should be a bit of a challenge  (but not so much as seems now...,-) ) but I need to test that better maybe in other version/game/jam. Good tip! I do hope that besides that issue you still had a bit of fun playing the game :)?! I shall try your game also. Once again, thanks for playing and the positive feedback and tips!

Sure I had fun! This game jam business is an awesome opportunity to see what other people are capable of delivering, but most importantly, you surprise yourself about your own capabilities under a strict deadline! I tried to give constructive criticism to every game I played, so the developers would make even more fun games in the future! :) Another tip: dev 60% of the time, and PLAY-TEST 40% of the remaining time, and also give your game to 30+ people for early feedbacks before the release. I did so, and my game is 30% different than what I planned out before I got all the valuable feedback from my dear testers. 1 man can't get it all right, I mean look at how dictatorship turns out :))

You are totally right :)! And having fun with these jams is what it is all about. Thanks again :)!

This was very fun to play. Altough it took me a while to get used to the movement, running from door to door trying to shoot everything on sight was very fun. 3D Graphics and effects are simple, but make a very unique atmosphere, which is great.

Very nice that you had fun playing the game :)! That was the ambition. Yes the movement is slightly difficult (maybe a bit too hard to control) ;). And thanks for the compliment about the atmosphere.

You made a great job here. The game contains strategy, fun and requires a lot of concentration. I love the game idea. The warning function when enemies are nearby is also  nice.

Thanks for the positive feedback :)! I am happy that you enjoyed the idea & playing the game, that was the intention :).

I didn't dislike the movement actually, I thought it was alright. the atmosphere is great, was a fun game to play!

Thanks for the compliment :)! Fun was the goal :)!

The movement was difficult to use in the beginning and the shooting was not inventive at the beginning. I loved the lighting and background. The story was fun.

Thank you for your feedback. I shall use it for my next games to make it better. I like that you had fun a loved the lighting and background :).

The movement is a bit hard to control. Except, I can see you put a lot of effort in this game, especially it is a 3D game. The graphics were simple but you use some lighting and particles which fit the game. Good job.

Thanks for the positive comment :)! Yes I need to polish the controls for this or the next Jam ;). And nice to read that you appreciate the effort and the small effects.

The story is interesting. The controls are a bit sloppy, but it was not difficult to move around and sometimes I could hear myself saying "I can get him before the door" lol.

But sometimes some arrow didn't hit the monsters and fell through their hitbox. And the sight is very limtied thus a bit frustrating at some point. The music is a bit repetitive but it adds some mood.

Also, well.....I was scared the first time I saw my screen shaking when monsters reached their goal. Actually it was fun :)

Well done on your entry !

Thank you for the nice comments & feedback! "I can get him before the door" is as it was intended :). Good to read that the story was interesting and the shake did his work also :). And most important that you had fun playing it :)! That is a great compliment.  Also thanks for the tips of course. Next time I shall try to polish the controls, hit boxes and improve my music skills.. ;)

It was a funny game to play.
I agree with some other comments, the movement part could have been better (it's slooooow) but it's really refreshing to see a 3D game and a kind of dynamic tower defense at that !
I would, if you have the time or just for a tip, add a little "UI element" that indicates in which direction the enemies are. As our character is in a maze and we can't really see where we go, not knowing where the enemies can be is a bit flustering.

A very good game, and a first one at that, so well done !

Thanks for the kind words and positive feedback :)! The movement was supposed to be a bit difficult as an extra challenge, but maybe I have over done it ;). Good tip for next time to polish the movement and the other tip is a good one also. Nice that you liked the 3D choice. Most important is that you had fun playing, that is the best compliment I could get.. once again thanx :)!

Hey I love the graphics and the enemy design. If you can add some long BGM I feel better. But anyway, more 2D games in this jam your 3D game is more unique among this party. I like the light effect maybe you use the shader or post-processing. Very like this graphics style. Hopefully can play your another game later. [BTW, if you can build your game in wegGL I think you can receive more rates and likes, just little recommendation]

Thanks for the positive feedback :)! It was my first ever use of Bosca Ceoil for the BGM. It can be better indeed and longer next time ;).  I used the Shader Graph for the first time in this game jam entry. Handy tool and fun to learn to use it and top that you liked the effect. And the recommandation about a WebGL version is a good one. I shall try to add it to the submission.  Once again thanks for you comments about my entry.

I really like the effect the game has. It reminds me on some old-school games I played when I was a kid. Very great job, I enjoy it! :)

Thank you for your positive comment. And very nice that you enjoyed it, that was my goal :)!

I really like the death effect and also the shoot effect. It's a nice game! A cool and interesting game play. I suggest you increase the spawn rate of the enemies, or decrease the amount of enemies that should be killed. Well done!

Thank you for your compliment and the tip :)!

You know for your first game jam, there are a surprising number of little touches that you put in which show great potential, for example, the particle effects you used for the doors and the moving shadows on the floor (I think those were particles) are really nice. Also - hades looked pretty depressing thanks to the terrain at the bottom and the color choices. I didn't find the choice of a rollerball control to be bad, it adds to the difficulty because you can't stop in time.

I do have a few minor complaints. When you kill a demon, they break into a spinning heart piece which looks like a power up but it isn't. It's a little bit misleading. I have the same complaint about the spawn points where the demons come from - they look like doors/portals. I tried going through one and a demon spawned from there and killed me. I would change their color to red or something so that the player doesn't think the same thing I did.

Submitted
My Love is Blind
LikeReply
GoedWareDeveloper1 year ago

Thanks for the positive feedback on my first jam :)! Like that you appreciated it. And there were some particle effects indeed and also my first use of the new Shader Graph to make the floor a bit like lava. Good points/tips and I shall use them for my next jam.

I like that you can collect upgrades. I dont really like the movement, cuz its so slow and it feels like you are moving some fat thing :D

Thanks for the feedback and tip :)!

My first ever game jam. It was a lot of fun and hope you enjoy this little game!