Survive as long as you can while collecting as many gems as possible!
Submitted by Linus Gärtig (@linusgaertig) — 6 minutes, 18 seconds before the deadline
Add to collection 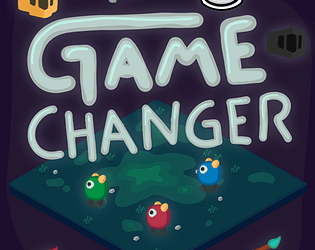 Ranked from 140 ratings. Score is adjusted from raw score by the median number of ratings per game in the jam.

Great submission! And this is really your first game jam - unbelievable ^^. Yes, as people have been saying in the comments, it's far from perfect, but for me it wasn't that confusing (though took a little time to understand what I have to do and why I even need to change colors). Nice balancing using cooldown times. Cute graphics. The screen is really small tho.

I love the visuals and particle effects in this game. Unfortunately, I can't say the same about other things...

Ok here's my personal opinion about gameplay.
You see, when I launched the game, quickly read a tutorial, played a first 2 minutes... At this point I've seen everything this game has to offer. And to me - it's not enough to continue playing it.
Having replayability is essential for the type of game where your goal is to... gain points. There is no real challenge in your game, you just have to shoot different colors from brushes (I guess makes sense) which apply effects to enemies, or kill them. Also, only yellow or red brush is enough to deal with enemies, I don't think there was any point to add a blue brush, it is not worth using. And about death... There is no indication of when enemy hits me, immidiately after hit game just fades out and I find out I'm dead, it's confusing. A little screenshake when you shoot enemy is a little annoying too. Health bar or multiple hearts would be great to have. A couple of bugs with changing character and player are ok, as long as they're not game-breaking.

About the theme.
It was unclear that I was "altering the games mechanics" until I read it in the description. All I was doing is shooting colors and altering enemies, but certainly not game mechanics... Really, this game has nothing to do with game dev. Even if it seemed like I was changing gameplay - it still wouldn't fit into game dev theme. I'm sure the "game dev" game should be about creating something, doing tasks that are similar to game dev process, like: drawing art, making music, creating levels, tinkering with code, dealing with game dev problems like bugs and errors, etc. There's a lot of things you could think of to match your game to the theme. And yeah, this theme may be really hard if you're making your first game (I assume it is your first game).

So, despite all being said, completing a game is a great experience, especially if you're new in game dev. And it's always good to share it so you could recieve useful feedback. I hope you'll learn from your mistakes and make some cool games in the future, good luck in game development!

Also be sure to rate my game if you haven't https://itch.io/jam/blackthornprod-game-jam-1/rate/319192

Great artwork, but I feel like it is missing a couple of things. I really wish there was a sound or visual effect of when you are hit, as well as a way of returning to the home screen.

Really nice art!
It's a nice idea, and quite fun!
I think the game woud've been better with an instant game over instead of a fade out, I think it felt strange that I could continue to move while I was "dying", made me unsure of what was happening.
A screenshake when killing the enemies would've made the game even better!
Keep up the good work!

Beautiful art, I like the idea. Still there is a bug where your character locks into a direction and you can't move anymore because you run forever into a wall. I would also indicate more about where the user would shoot... most of the time I lost my mouse cursor. Good job!

This is a beautiful game! I love the concept, and this was well made, except for the lack of instruction. I also found it hard to decipher the enemies that would damage each other. Overall I think this has potential.

I was a little lost despite the tutorial in the first few minutes of play but everything worked out quickly! I really like the sounds and graphics with a fluid gameplay! Well done! Well done!

Submitted
Into The Steam
LikeReply
Linus GärtigDeveloper3 years ago

The art is also fantastic, it feels very serene !
Gameplay can be a bit confusing but has a lot of potential ! Keep it up :) !

Thank you so much! I really appreciate the feedback! :)

I will keep that in mind for my next game! :D

The idea is interesting but a little difficult to understand at start. Try to make the game more accessible with an "in game tutorial" and not only a "tutorial" menu. It's always a good idea to have the player learn directly playing with cool explanations.

This is a really good suggestion!
You are right... in game tutorials can be really helpful! Thanks. :)

Thank you so much for checking out my game!

I love the art of this game and I liked the simple but fun gameplay, I just laughed when the blue and green monsters fought each other ^^. Great Experience.

Great job man! The controls flt really good, and I really liked the idea of having different mask choices. However, I found a glitch that made it so it would continuously  fade in and out for a while, before sending me back to the start screen.  I loved the art though, and thought it looked great!

Thank you so much!
This bug was reported to me a couple of times now. Thanks for the feedback.
I am glad you liked it!

Simple game but nice :) I feel like I died unintentionally a lot of times! Not sure if the hit box might have been too large or something.. and also should the birds be able to kill each other?

On other note:
Random though that would have been nice is that you change the color on the bird to the same as the other. And if they clash into each other they die. So I you can't kill them with the color brush :P

And also if you have time you can check out my game :) and rate/feedback me! :D https://itch.io/jam/blackthornprod-game-jam-1/rate/318942

Thanks for the feedback. Will keep the hitbox thingy in mind!
In the moment the brush lets you change the colors of the monsters... red ones attack you. Blue and green ones attack each other if they see each other. I do not really get your other note. Feel free to write it again. Would be nice if I could follow your thoughts! :D

No I was just thinking that to be able to kill the enemies you need to change them to have the same color and make them clash into each other. But you already did that with the blue and green ones! :))

Awesome game! Love the style of it. Very clever concept.

Few things to consider for changes is to add in some ambient noises/music in the background. Also some good visual feedback for when the player picks up a gem would help. Also would clean up some of the layout in the tutorial screen. Just make sure all of your text is neat to give it a good polish.

Fantastic work! I think that this has a good shot at winning in certain categories.

Thanks for all your feedback!

Some ambient noises or music will be the next thing to learn... this can add a lot more detph to the game, you are right!
I dont know why I did not implement more visul feedback for picking up a gem... thanks for pointing that out! :)

Fun game. It's easy to understand what to do and I like that, no complex tutorials and mechanics. The art also very good.

Congratulations on your entry for the gamejam!

Thank you so much for trying it out! :)

Nice work! the artwork was really cool! If the character was a little faster I think it would feel better and also look into making music for your next game jam game. If you could take a look at my game that would be awesome, here's the link: https://itch.io/jam/blackthornprod-game-jam-1/rate/319010

Thanks for the feedback! Creating music will be the next thing to learn!

I will check it out!

This game have simple mechanics, but it's fun do play! The visual is nice and the gameplay was getting harder over time. The only thing I think it was annoying was when the screen started fading in and out, this gave me a little of headache, but I have motion sickness, and there are plenty of things that makes me sick, so it's probably me XD

Thanks a lot for pointing that out. Yeaahhh... the fade out thingy does not work as it should. I am glad that you enjoyed playing!

Hey, tried it out and I like it! The art looks and feels good.
I feel like the players move speed might be a bit low tho, other than that, good job!

Thanks! Will keep that in mind. It was tough to find a satisfying movement speed... thanks for the feedback!