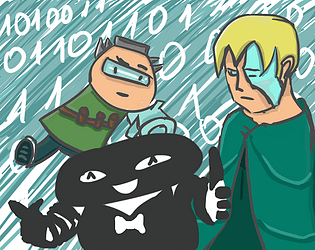 I think this had some good ideas, such as the use of the triggers which opened different paths and the hints written in code (good use of the theme). I think they could have been presented in a clearer way though. I feel like the field of view could also be increased, to allow the player to see more of the level.

It would also be good to change shooting to be repeated if the mouse is held down, as there is a lot of shooting, especially for the bosses and it results in a lot of clicking. I didn't make it past the green boss; not being able to see him for most of the fight was frustrating. Some kind of feedback when you get hit, even a noise, would be good too.

I couldn't go past the corridor where I was shot at, simply nothing happened :/ Good job for completing the game, I also had to give up on some things to complete the game :) Also, not sure if it was browser bug or game, sometimes I couldn't controll the character, It was just running in  one direction for some time (about 10s?)

Cool game! I really enjoy the idea with the lights and the comments next to them!
Sadly I did not manage to kill "pacman"... I tried like 15 times... this was frustrating.

I also could not get any farther after the 10 second counter and sometimes the controls were unresponsive.  Also, the fact enemies went through the walls was a little weird.  I enjoyed the music and the artwork, also the story was nice.

Submitted
The One True Hacker
LikeReply
SayuGameDevSubmitted2 years ago

I couldn't play much of the game... When I reached the 10 seconds counter, I didn't know what to do. I activated it and explored the map many times, but nothing seemed to change.
But I really liked what I could play! It's a fun fast paced top view shooter, quite challeging too! I got stuck in the wall sometimes and my controllers sometimes didn't respond, but overall it was a really nice game! ^^

PLayed got through to past the second boss and I think don't think anything else happens, tried shooting the second counter but it didn't open much.  Is there anything after?

Love the musics though,and the way the character runs is entertaining. :]

After the second Boss, Astaniv appears and tells you that you opened the entrance for him to escape his game world, so you have to catch him by running back, shooting through the enemy hordes and reach the beginning room of the game, touch the exploit crack and you get teleported to the final Boss Astaniv :>

Oh :< the door was locked when I ran all the way back, unless the counter opens it up but I couldn't

return through the error door that was still there

Really cool one, like the smooth feeling of game. Main issue i got faced is something controls doesn't wants to listen, and i'm getting stucked in the wall. Other than that, good job, good game, Congrats

Yeah, I think the problem with the controls and wall-stucking lies with the resolution of the monitor or the web-browser, but I'm not sure.

Anyways, Thank you for playing my game and the nice feedback :)

Really fast and feels smooth, music goes well with the action too :)

Thank you so much for playing it :)

it is a nice game! i just got some issues with the colliders, i get stuck on walls many times! then i dont know if it is an error of the game or something of the web but the player move by itself as if the keyboard was stuck! ignoring all this ! the music is awesome, the theme was really good, you just have to improve the visuals! Congrats, a really nice experience

Thank you so much for the nice feedback! :>

Pretty nice game! i think most of us need more than 2 weeks to make this! Congrats!!

Pretty tough with just a trackpad, but the puzzles are fun and the humor's good. Unfortunately, I think the game softlocked after I got killed by pacboy, but it was pretty fun up until then.

Thank you for playing my entry :)

And yes, a mouse is recommended, you have to be able to spam the button ^^

I got stuck at the start counter thigy ... I couldnt get anywhere ...

If you have time, check out my game:

I got back to it, and after I got killed by the Pack man guy,  he disappeared to the left. I couldnt kill him, and he was still able to hit me.