Eating babies while avoiding Momma...
Submitted by atolVerderben — 26 minutes, 31 seconds before the deadline
Add to collection 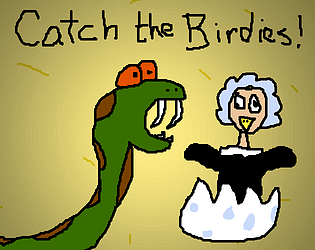 Episode description
Courage is tasked with watching over small baby birds while the mother is away, in this game you play the snake trying to eat the birds.
Video: https://www.youtube.com/watch?v=mCFscahkClQ

Anything you want to say to players before they play?
You will slowly "starve" and when the bar empties you lose a segment of the snake. If only 2 segments remain (head and tail) you lose. The vulture will also come down and take away any segments it lands on plus the ones behind.
You may eat the eggs before they hatch to refill the hunger meter, but it will not increase the score or add snake segments

3 words.. "SIMPLE YET EFFECTIVE" ..... but its too hard for my taste... I woke my mom up mashing the keyboard buttons xD

Thank you so much for playing and your kind words and feedback!

I think this is a case of I played this game so many times what was challenging for me ended up being really hard for everyone else :D

Maybe I'll remember to implement a difficulty slider next time to save keyboards and sleeping mothers!

Good concept and proper hard... Would be nice if the bird shadow took just a bit longer for warning but still pretty good. The choice of music was interesting though Beethoven's sonata feels a bit creepy :)

Thanks for playing! I played around with the shadow timing quite a bit, hard to get that sweet spot. I wanted to make sure the game was challenging, but I played it so many times I might have made it a bit too quick :)

Thanks again for playing and for your feedback!

This game, I felt, was a good difficulty, though the bird seemed impossible to avoid, even with dash. I like the perspective you took of the episode, and it definitely has a Courage vibe with the theme, the snake wearing a cowboy hat (I don't remember if that was in the episode, but it definitely seems like a Courage thing), and the music. I liked how you used the mother bird coming down to attack the snake to add a challenge. Some smaller things, but I liked the interactivity of the menus as well as the transparency added to the mother bird so you could still see what you were doing. The graphics could use a bit of work (mainly the background and the menu screens), and I think some kind of dash meter would be helpful.

There is actually a snake that wears a top hat in a different episode Courage which the cowboy hat is an homage to.

I agree on the graphics... art has never been my strong point and I had a different idea in mind originally (based on the episode with the top hat wearing snake, Big Bayou) but ended up shifting right before the end of the game. As a consequence my background and menus were what really suffered but I powered through with a sort of "purposeful programmer art" aesthetic :D

Thank you so much for playing and your great feedback! I really appreciate it!

umm.. I don't know why you chose the Moonlight Sonata for the BGM.
truly, it's a fun & addictive game, love the simple graphic too. but.. the sadness of Sonata filled in my ears and it became a contradiction in my mood whether it's fun or sad :D
Overall well done of creating this game!

Haha, I could see BGM being weird with the gameplay. It's a bit of a throwback to the Courage the Cowardly Dog series as a whole, they often use classical music in the background during many of their episodes. When playing with lighting I got the idea for Moonlight Sonata and kind of enjoyed the juxtaposition of feelings you described :)

Thank you so much for playing and your feedback!

Okay, so I played Catch The Birdies.

First few seconds in – I felt kinda lost. The fact that I don’t play many fps on PC didn’t help (have trouble reaching for left shift). But the game became obvious very fast, after the first death, and after that it was quite fun.

I like the dash addition and the spin on original snake’s eat mechanic: it became manual. The controls feel very natural once you get a grip on them.

Graphics-wise it’s too simple for my taste, but I liked the snake and the Vulture sprites. Also, Vulture appearance is very cleverly designed: with a shadow warning. I know for sure it wouldn’t feel fair if the Vulture came down without this overshadow delay. It also adds a lot to visual asthetic of the game. And the camera shake when Vulture deals damage to the snake. Very good and clear feedback.

Conclusion: Easy to understand mechanics based on a preexisting knowledge – it really works in favor of this game. Main sprites are nice, but background and UI could use some work. Can’t say much about being true to the show, as I am not very familiar with it. But the music works really well with the mood even on it’s own.

Thank you so much for the detailed feedback! Art is definitely not my strong point! I spent a lot more time on the snake and bird, then shifted my idea so the background and the UI were thrown together pretty fast so I'm not surprised it showed. Glad the controls were quick to pick up and you had fun!

It's a fun addictive game! It's quite fast paced, but the calm background music makes it all so relaxing! Well done :)

Thanks so much for playing and leaving your comments!

The game is fun and the art is very funny. An interesting variation of the classic snake game. The attack of the mother bird is a good addition to mechanics.

Submitted
IT on fire!
LikeReply
atolVerderbenDeveloper3 years ago

I'm happy you enjoyed the game and the art! Thank you very much for playing and leaving a comment!

Some really nice subtle touches and things you did to make this come together. Simple things like a little transparency on the bird in flight, that someone might not think about, but make the game playable and "fair". Nice Entry, thx!

I'm glad you noticed the little things and they made a difference! Thank you so much for playing!

This gameplay is so fun and the menu is really creative!

Thank you so much for playing and kind words! Glad you had fun!

a nice variation of a classic game - quite smooth and fun .-)

Thanks for playing and your comment! I'm glad you found it fun :)

I like the idea and the animations and graphics are really great!

Thanks for playing and your feedback!

Submitted
The Bane of Ramses
LikeReply
atolVerderbenDeveloper3 years ago(+1)

I agree, one of my favorite classical pieces! Thanks for playing my very rough game!