How far can you get in a game of chess redesigned for the 21st century?
Submitted by IanGoGo — 19 hours, 51 minutes before the deadline
Add to collection 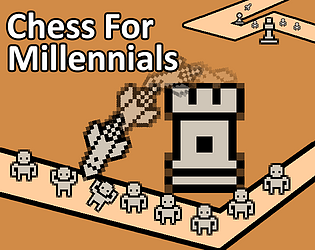 Really really fun, played it just now since I sadly missed the jam, but the concept is great, and it can be quite challenging at times, 10/10

Really innovative concept. Liked the mechanic of moving the towers which is something pretty rare in TD games. good job mashing two game concepts together in an engaging way!

This has a bunch of neat ideas in it.

Also the forced move mechanic is very interesting, that was probably my favorite part. I can imagine an expanded version of this making that more strategic and that being really cool

I'll admit that I've been avoiding playing this one for a while because I found the title obnoxious.

Thanks for the feedback! I wasn't exactly happy with the title either, my other idea "Chess Defense" felt to bland. Do you have any ideas for a better name?

Hmm. I agree that Chess Defense is a bit bland. Maybe something with Gambit? It's a real chess term and sounds kind of cool. Rocket Gambit? Or the classiest of all chess openings: The Fried Liver Attack Which already sounds much more like a video game than a chess concept.

I like those! I will definitely consider them, thank you!

Now I'm nerd sniped by chess-rocketry puns. I'm sorry to do this to you: The Goddard Defense, Gravity's Chessboard, Congreve's Gambit, Pawn To V-2

Or invoke Nabokov's book about chess and go with The Defense

Clever idea to make the towers moveable during the waves. Nice counteracts the usuall wait time in classical tower defense games. I would have prefered if the towers would snap to the grid since the movement rules and even the art is grid based.

I love tower defense so I was totally on-board! I could definitely see this being developed with more maps and enemy types. My one wish is a fast forward button! Awesome game.

Cool li'l thing! I like how you've incentivised moving around pieces, that being such a standard problem of tower defense games. There's probably more that could be done with this in many directions, as it definitely gets stale after a few rounds, but there are loads of possibilities (chess-themed and otherwise) should you decide to add more levels, make the current level expand, etc.

Great work! It's polished for a more experimental Jam title and plays pretty well! Gameplay-wise, I'd recommend at the very least limiting where players can move their pieces or allow a bit more leniency with getting to spots that should in theory be invalid to place a piece in if they player is really close to being able to. With either solution, you'll be more clear with where the pieces can go system-wise, which doesn't seem like as much as a focus, and, currently, is distracting from the interesting of moving them around tactically (more strict in placement, or more lenient in movement, does that make sense?).

Hey man, I the app doesn't run on mac. Are you using Godot? Exporting as .zip didn't work for me either, but exporting as .dmg did fine.

No, I'm using an engine called Defold. I've never built for Mac before so that was probably the issue. I'll get it fixed in the post-jam update. Thanks for letting me know!

I managed to get it to run by following the instructions in this solution https://superuser.com/questions/898124/the-application-someapp-app-can-t-be-opened

Nice idea! I genuinely liked it. I would make the pieces to be fixed to the cell grid instead of free though.

That's something I'm looking into! Thanks for the feedback!

The concept is genius. I mean it really gives chess vibe, even through my first thought was "Ah, so it's just TD game with chess graphics". It's something I enjoyed playing - which is a lot in game jam projects, because most are just prototypes with no real gameplay value.

-sometimes you cannot move a piece because it's surrounded with other pieces or the path. But you can still save it from destruction by just selling it before the rocket hits. Seems kinda exploity to me.

-sometimes there is just no time to move all your piece to safe spots before the wave ends. It's frustrating, because you literally get punished for something you had no influence over.

-After moving piece it should leave piece submenu automaticaly. It's annoying to click "back" every time, and it consumes a lot of time which sometimes is not enough.

-It could be neat if I could see what piece could be moves, and what could not without checking every single one individualy.

Thanks for the feedback! The menu system is something I am looking at overhauling to make it more usable. I'll look at modifying or removing the sell button. Quick waves is something I will also look into.

If you are on the move screen while the piece gets nuked then you get stuck in the menu and cant leave. That being said I made it to round 20 and the ramping difficulty makes the game a lot of fun to play, the different strategies give it some nice repeatability too.

Thanks for letting me know! I'll have this fixed in a post-jam version!

Fun game, the music is very chill and the sfx are great!

The game is really creative, I've weirdly seen a lot of  chess inspired games in this jam and this is definitely one that plays with chess' strengths. I like the movement idea even tough it get tedious after a while because you have to click around in menus a lot just to move them. Would be nice if you could actually just click on them and move them immediately if they have a move left. Besides that pretty innovative and well made game.

Thanks for the suggestion! I'll add that to an updated version of the game once the upload freeze has been lifted!

Extremely creative concept. Seems like a game that was truly born from the tileset; a worthy representative of the spirit of the jam. The pressure to keep moving towers and the pawn promotion concept were particularly inspired mechanics. Difficulty was a bit easy. I invested in promoting a legion of queens and felt pretty unstoppable. The only danger to my forces was that I was almost killing waves too fast and not having enough time to move my threatened pieces. My biggest criticism IMO is that I feel the move system is a bit clunky and could use a few less clicks. In particular I think the player should be able to select a different piece to move just by clicking it, instead of having to close the menu on the current one. A more QOL request I'd have is to be able to see which pieces have pending moves available. All of these are nitpicks. Even if the game wasn't super challenging, I was carried along by how much I enjoyed the concept and I hope you are very proud of it.

P.S. Love the music choices as well. Did you make those?

Thanks for the feedback, I really appreciate your comments! I'll look into simplifying the movement system some and redesigning the select piece menu to make it less clunky. Your QOL request is also really good and I'll see if I can implement it! As for the music, I got it from a humble bumble pack I bought a year ago, so I own the rights to them.

Love the idea! I kinda wish the towers snapped to the grid, and it would be cool if the pawn could only move forward, would make it kind of a temporary unit, though the upgrade mechanic is super cool.

AMAZINGLY fun, really neat premise to let the player move towers in a tower defense game. i can totally see this expanded upon and becoming a full commercial release, great job!