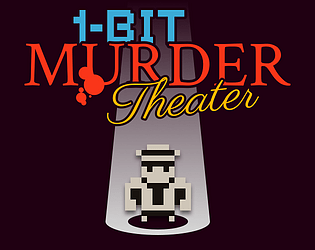 This is nice. With a bit more diversity in the situations it would be really fun and replayable. The timing was remarkably precise. I almost always got to the point where I had enough information to make a guess in the last 30 seconds or so.
I found the writing kind of rough. The hard boiled detective style is totally appropriate but it felt like it needed some polish. In particular the first couple of comments on the mansion from the detective were cute but after that it just seemed monotonous and whiny.

The escape key doesn't restart the game for me in the last screen, I had to quit and relaunch to get a new scenario.

Would you say that this particular timing was enjoyable?

As for the writing, the large majority of it was spit out pretty quickly. As far as comments about the mansion go, I assume you mean the "whoah, shiny" attitude the detective has? There are multiple points where I do that and yeah, I realize that may get repetitive

I had multiple people report this issue and I'll look into it. It's the only bug that's been reported so even if I don't end up expanding the game I want to get it fixed after the jam.

Was the timing enjoyable? Hmm. Personally I always prefer lower stress games over high stress games so I would probably prefer a version of this that focused on the exploration and logic puzzle elements and relaxed or completely removed the time pressure. But the timing didn't bother me as it is, especially since there is so little to explore in this version. If the mansion were larger and more immersive and NPCs more talkative I'd probably want to be left alone to explore the setting.

Yeah, the "whoah, shiny" stuff is what I mean.

Had a success on my second try. I was on the right track on my first try too but the timer ran out unexpectedly. I think it would be nice if it gave like a 5 second warning alert or something. 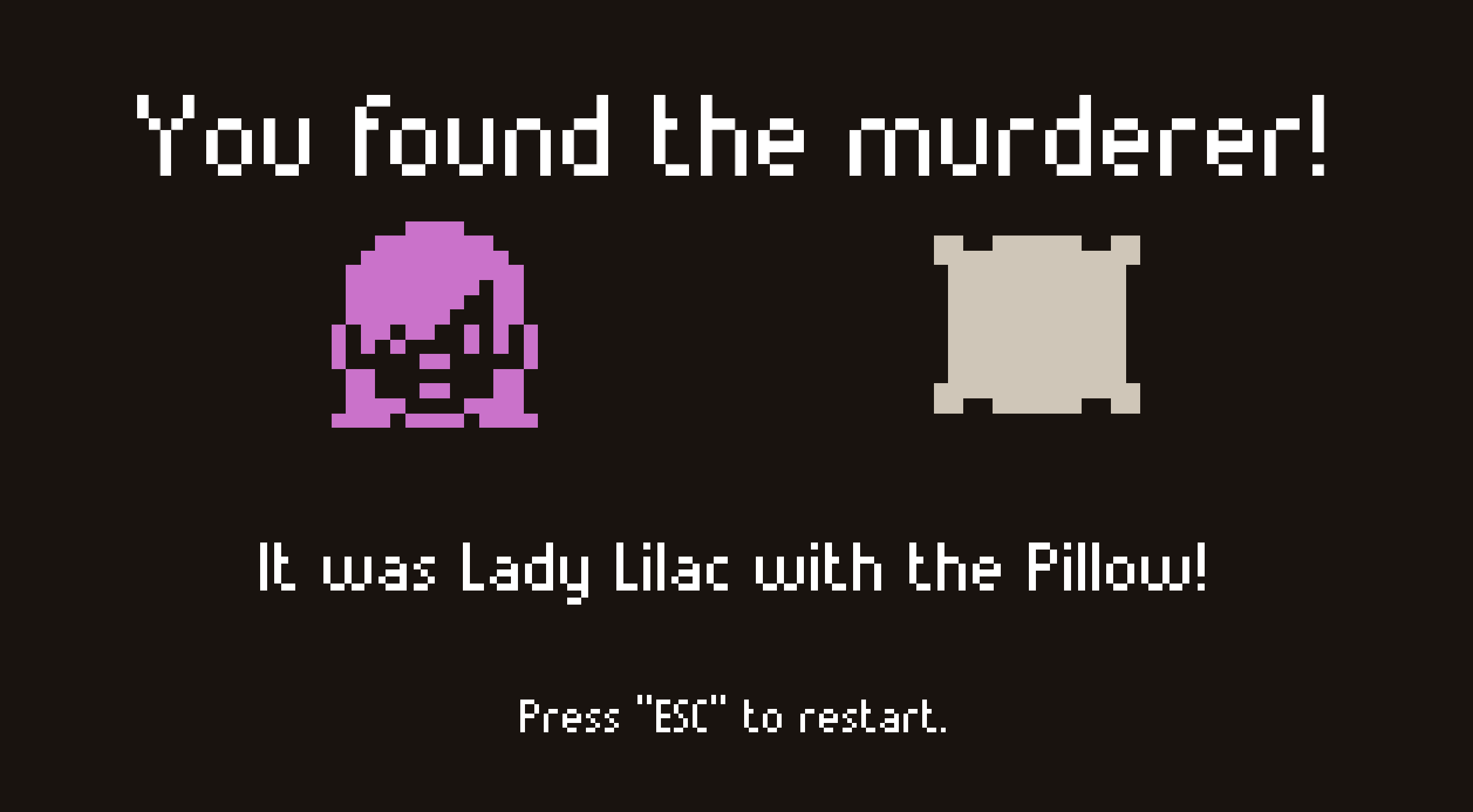 Oh well, I also didn't find he body on my first try. I think it blends a bit too well to the floor. Unless of course the color is randomized.

After failing, the "press esc to restart" does not work. On mac version at least. Funnily enough, while I was writing this and after tabbing back to the game for another try, the game still managed to fail my last successful attempt. 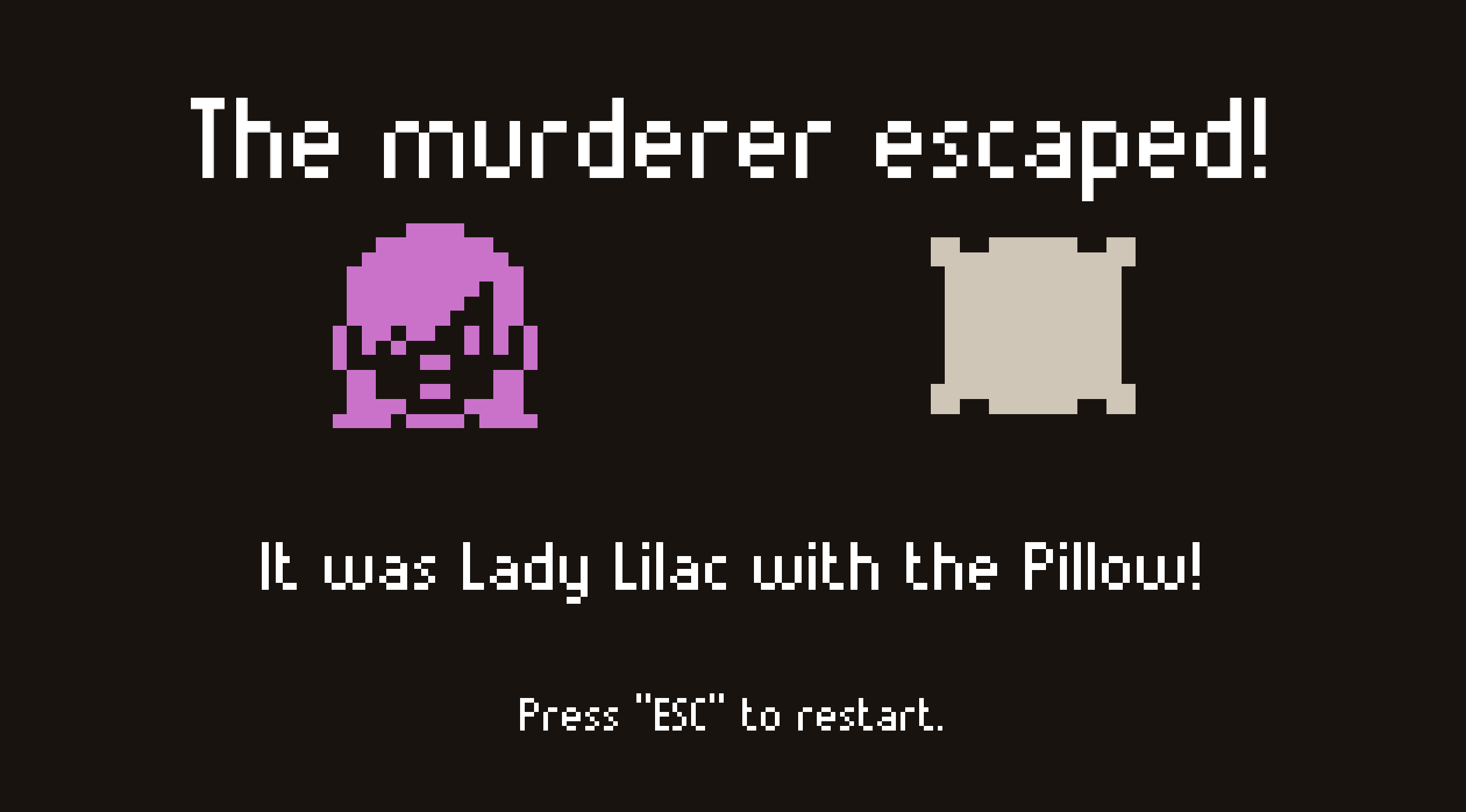 It really removes the state of urgency when you realize that all your clues (except for the body I think) can be casually explored as long as you want in the ESC menu. It becomes more about frantically going through the whole available space clicking on everything without even reading them. And then just review everything in the last second when you have all the time in the world.

The sink and toilet hotspots were bit too close to each other. It was quite difficult to check on the sink since it didn't have a square which it didn't share with another object. The toilet seemed to always hog the attention and you had to backtrack back to completely empty space to try to approach the sink more carefully. 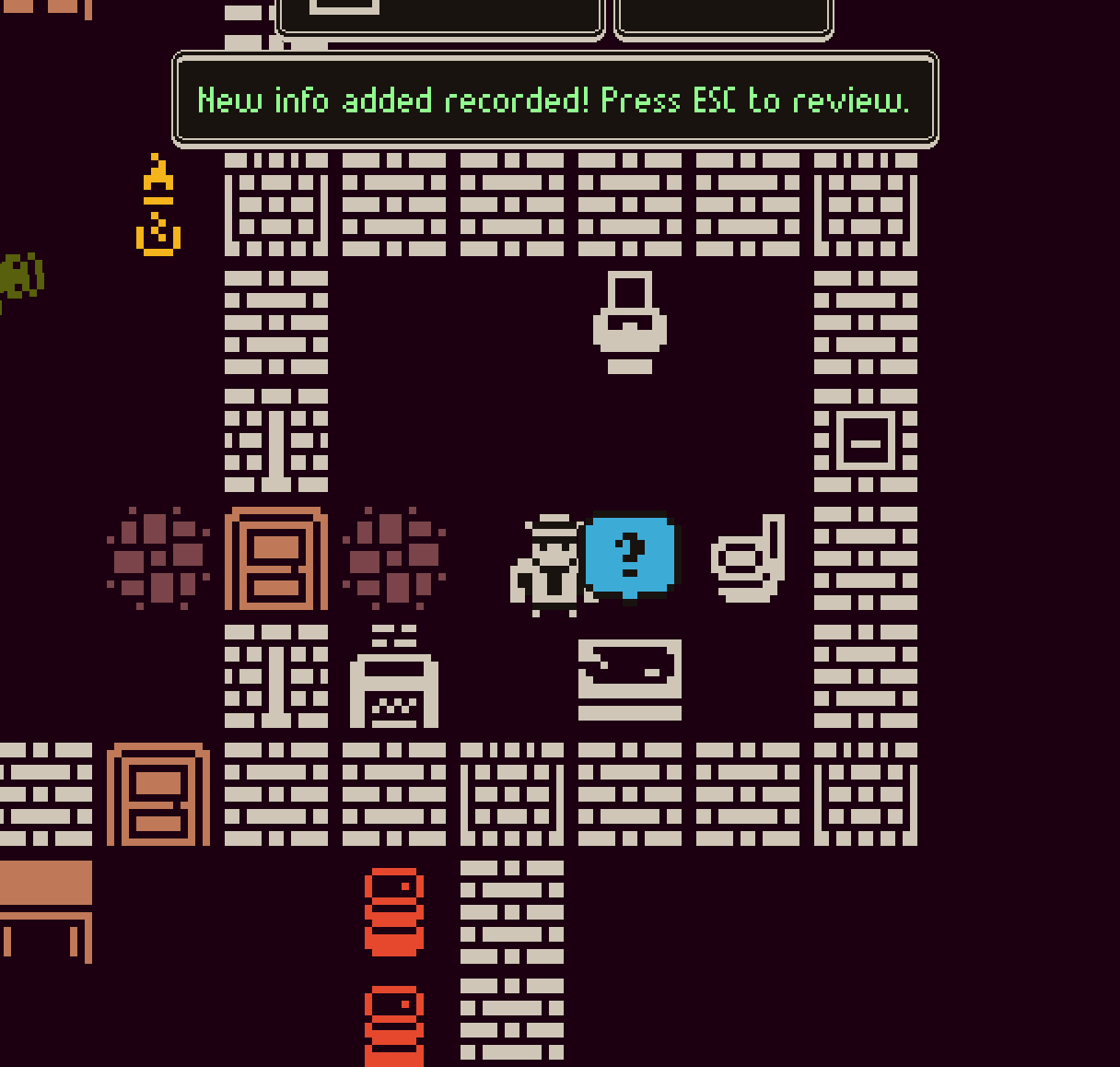 Really nice job with all the simple yet effective animations and effects. Really brought the game alive! Some nice pink pantherish theme would have made the game mood even more bad ass.

Anyways, well done! Even with the randomization, it doesn't offer much replayability. Maybe with a bigger cast of weapons and people it could be that. And obviously a randomly generated mansion would help too.

About the warning: this is absolutely true. I initially wanted to make the timer flash red when the time was low, but this didn't manage to make the cut. It's an important piece of polish, I agree with you.

About the body: you're not the first person to report on this and in hindsight I made a mistake. The color of the body is a more desaturated version of the sprite when "alive", so it tends to get lost. I also noticed this through playtesting, but didn't realize how big of a deal it was because I knew where to look for the body in the first place.

The ESC to restart issue has been reported. I think it happens on windows too, and I'm using a mac myself and I recall it worked fine when I  playtested, so it's probably a subtler kind of bug. I'll look into it!

The "winning" screen turning into a "losing" screen after alt tabbing is very unusual and you are the first to report it. It's very odd and I'll look into it.

Noted! There are some other spots where it's a little hard to examine what you want, so I'll have to improve the system.

The lack of music is an important point. It's just that I am kinda crappy when it comes to sounds and music so I tell myself I'll add them later, which usually results me in being too tired to eventually care about them. I had to push myself to include the few sounds I did :p I realize this is not ideal so next time I'll work on sounds while I program just like I work on art and animation at the same time.

The randomly generated mansion is a great idea I considered, but just like more suspects and more weapons, it's something that had to fall on the cutting floor for time constraints.

Thank you for your long post and valuable feedback!

It was well polished and nice looking, even though I wasn't really engaged by the Cluedo mechanics. Good job!

Really cool concept! It played nice and looked good too. I really like logical deduction in games and the fact that you made it re-playable is really interesting. If you ever get to making a more elaborate version I would love to play it!

I’ve been considering a more elaborate version, if only because I’d like to improve the underlying code and add a few rooms and weapons I had to cut for time constraint. Thanks for playing!

This was a good game! I always am a fan of murder mysteries. I'm also grateful to the creator for giving me a hint when I needed one. :P

Do you...have any hints or anything? I feel like I usually know who did it but have no idea how to tell what weapon it was. I'd like to get at least one right :P

EDIT: Forgot one other thing, I also don't seem to be able to actually restart with ESC

Find the body and examine it. This will give you a hint. Then look around for possible weapons... if you find one that matches the hint and is in a suspicious place, then that's probably the murder weapon.

I'm on Windows (10), and ESC does actually work to call up the Accuse menu. Not sure what it is...

Thanks so much for the hints by the way :P

Love a good murder mystery. The game was fun and the atmosphere was cozy. Not sure the time limit added much, though - all you're really doing is talking to everyone, finding the body, for the murder weapon, and then pausing to make the accusation - the most interesting part of the game happens while it's paused.

I added the time limit to add some sense of pace and to underline the replayable nature of the game. I think it conveys that the game is really short and it's meant to be replayed multiple times, so while it pauses to let you think a bit, it also tells you that there is no reason to get it right the first time around. That's my logic, at least.

That was really cool! I really like the idea and the execution. The current state of the game is pretty simple, it feels more like a mini-game right now, but I can easily see this being expanded with some more complicated rule set like you mentioned in the other comment. But even with that, I really love this as a jam game.

My only problem with it is that sometimes the suspects and the body would spawn somewhere that block some pathways inside the house so it becomes really hard to navigate around them, that's about it.

Mh... I thought I managed to position them to be pretty unobtrusive, but I must have been wrong. I'll keep that in mind. Thanks for the feedback!

Really enjoyable game ! Played it twice ! Only small issue was i couldnt see or find the body on the first playthrough so I didnt quite understand it :D Even so, this is a  fun quick and quirky game that id play again :D

Yeah, I also noticed the dead body tends to blend a bit with the environment. Thank you for your feedback and I'm happy you had fun :)

It’s a decent and cool game, but it needed more of a spark to it, something to differentiate from similar games like Clue. The gameplay is simple, just talk to everyone and see who lied, then find the weapon that closely resembles how the person died. I think it’s awesome that the circumstances are randomly generated, but perhaps more complexity such as multiple people lying, some person trying to throw you off your deduction, arguments, or having multiple clues that piece together to reveal information would serve to make the game more engaging. Good effort!

I completely agree with you. All these are considerations I made through development. For example, I considered giving suspects different roles (an accomplice who protects the killer, a person with a grudge who will always lie to frame somebody who is not the killer, a forgetful suspect who doesn't provide any useful information etc) plus more types of weapons and clues, but unfortunately this is all I managed to do with the time allotted. Time management is a skill in itself with these jams, and I'm not too good at it (yet! :p)

Thank you for you kind words!

I loved the idea, and the different characters were awesome. Keep up the good work.

I loved the idea, and the different characters were awesome. Keep up the good work.