MizJam Entry
Submitted by animatrix1490 — 8 minutes, 15 seconds before the deadline
Add to collection 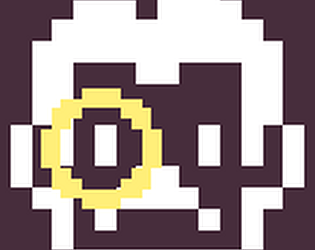 I really like the way you made the assets 3D, super unique, very cool!
The gameplay felt pretty good, but it felt super strange that my aiming and moving were both controlled with the mouse. It would have been really sweet to aim with the mouse and move with WASD or something along those lines, because the control scheme hindered what was an otherwise really fun game! I'd love to see more levels!
Great work!

Yeah, that's probably a good idea. Thanks so much for playing it!

Hey cool mix between shooting and dodging with mouse^^

Only issue is that i can speedrun this game under 4 seconds lmao.

But hey, quality before quantity am i right :)

That's amazing! A NEEEWWW RECORD! :D Thank you for playing!

Its clever 3D usage of asset! Not only clever but and unique too!

This is a really cool idea, very creative use of the art pack.

My biggest problem was dodging attacks. The ship moved really slow, I had to move my mouse really far to be able to dodge. Having the mouse go off screen wasn't a problem, the game ran in fullscreen so I was still able to move the ship and fire.

The first round I played, I was a little confused when I died. There was no indication that I was hit and I didn't know that my shield meter acted as my health. Maybe adding some sort of particle effect on the ship when it gets hit will help players know that you lost health, and if time allows it you can add another particle effect on the shield meter to indicate it went down. As other people mentioned, by the time I was done reading the instructions, I was already down to 1/4 of my shield, so maybe have a small grace period at the beginning.

Other than those small things, this is a really good first game. I like the little jingles and sound effects, and the space ship looks pretty cool. Definitely very creative and I would play more if it had more levels.

Thank you so much for playing it!

Nice game! Only thing that bothered me - reading the instruction while receiving damage. I like the idea and overall looks. I'd like to have a longer experience of it, if a full version is in the plans :)

Thank you! Yeah, that's a solid criticism. I appreciate it! I have at least been toying with the idea of creating a longer version--I did have a lot of ideas that didn't make it in--but that probably won't be for a while.

Thanks again for playing!

I like the whole "2D" to 3D aspect, having the asteroids and the ship actually pop out was good eye candy for me.

wow that was over real quick ,, did I miss something ?

it looks great tho , I like how you used the art assets , very creative and the shooting felt also quite good actually , not bad for your first game , a lot better than my first try for sure

keep up the great work

Thanks! Yeah, my background is more on the art side, so I spent a lot of time that I probably should have been using on the game part making things look a certain way

don' do it for real

what I'm trying to say is that it is completely fine , your game was really good looking and if that is the part you wanted to focus on that's ok .

Hey I loved what you managed to do with the art pack, Really creative. It reminded me of star fox on the snes.

It would have been cool to have some more enemy variants then lead up to the one we saw in the game.

I had one small bug my mouse pointer would go off the screen when the in game aim was over the boss and when i click the shoot the game would minimise. I think this is a really easy fix, No big deal.

Thanks for the feedback! Yeah, I definitely need to fix how the aiming works :P

It worked alright for me. Really fun game for the short while it lasted, make it a lot longer to make the shields matter and that would be great, I love the creative use of art, that ship was genius.

Thank you so much for playing it! Yeah, I had plans to do other enemies and stuff but I just ran out of time...and put off programming in order to do artsy things :P Like I said, though, thanks for trying it out!