Oh Chosen One, can you save the world?
Submitted by randomphantom — 1 minute, 26 seconds before the deadline
Add to collection 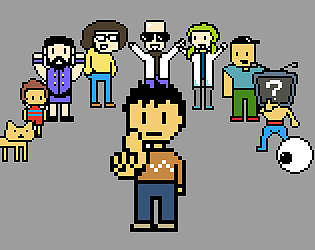 How is your game meta (within each relevant category)?
Explores a situation if the characters in a game are self-aware
Makes references to certain games, shows (let's see how geeky you are)

Anything you want to say to players before they play?
Spacebar, direction keys or WASD, mouse. (Hold Spacebar to fast forward dialog, press space to advance)
You'll know when its the end of the game...

This was really awesome!! When I got the "special item", it was a great moment of "Ohhhh I see what you're doing here!" :) I enjoyed the boss fight as well! Great sprites and music too.

I am so mad! Why was there nothing to the right of that stuff at the end? I JUMPED SO HARD WHY!

Yeah the ending is kind of a downer, for the jam version at least, haha. Thanks for playing!

LikeReply
Chase of BassSubmitted3 years ago

This was surprisingly cool!  I could already tell i liked the art but went deeper than i expected :D  -the min/maxing window boxes was really cool and made for some very innovative play mechanics.  The humor in the dialogue was great -liked how you dropped hints, puns, and instructions in the dialogue.  pretty impressive and well thought out game!

Glad that you appreciated the dialogue, it was very hurriedly thrown together. Thanks for checking out the game!

Loved the panels mechanic here, and the bit with the first upgrade. Not what I was expected at all. XD

hmm, you might have gotten stuck at the start... gotta head to the left by jumping on the trees

Hey, I had fun playing your game!
Would be great if there was a way to speed up dialogues.
Also, I didn't really know what to look for when fighting the boss.
Cool game!

Thanks for playing :D ! Yes there is (hold spacebar to fast forward the dialogue). For the boss, its all about observing its eye movements as the real one will be looking towards your cursor, although that's probably a little confusing at the start.

Very nice game but for some reason I had no sound. Is there supposed to be any or is it something from my machine. Otherwise, really clever game.

[Edit] I messed up my laptop's settings... Sound is working now and its great!

Glad that its working for you, thanks for playing! :D

Wow, I'm so impressed! This game is one of the coolest I've tried in the jam! I hope you get more ratings soon. I think trying to make a HTML5 version should help :)

PS: Is there a good ending to the game? I had to close it after beating the boss because I couldn't figure out what to do next.

Haha thanks! Sadly that's how it ends for the time being at least, glad you made it to the end though! A Html5 wouldn't work I think as you don't get access to user32.dll.

This was a lot of fun!  I managed to finish the game and beat the boss.  I loved the puzzle like nature of the whole thing.  Also, the fact that you kept moving my cursor at the end of the game was a nice touch.

I think that the jumping mechanics could have been a little tighter.  Trying to land on the top of the pointy trees with the current jumping method was difficult.  This is a very small nitpick though.  Everything was excellent!

Thanks for playing! Yes, that pointed tree makes it a little unfun (time to chop it down for the next version I guess!)

Charming visuals and fun, innovative platform mechanics. The Spyware kicked my butt, though!

This is an amazing game .. taking the concept of meta and making impressive gameplay out of it . i really enjoyed it. i love it.

why does this only have 2 ratings? .. goddammit people xD

Haha, guess I need to promote it more, thanks for playing though! Hope you managed to clear the boss battle - how did you find it?

I will be honest it was a bit buggy ... i died a few times coz the character didn't want to jump or something.

but i was able to beat it and it was very clever ... it was a puzzle after all and i like these types of puzzles, he got REKT SON.

Congratulations for your hard work.

I have to say that your game is much deeper than what I would expect from the first look of it...

And I did decided to give up while stuck at first scene, before I checked the comments....

The game is quite complete in the sense of story and challenge. But those mechanics wait in the second scene, after you have to work out the "tree jump" trick by yourself. (Not really yourself, though as the second NPC would tell you.)

This is against the way we do game design usually.

But wait, it's a meta game, it feels like finding an Easter egg unlocks a whole new world!

You are supposed to miss them if played commonly. Maybe never notice them. From some perspective they are not really part of the game.

From the second scene, there are quite solid level design around the simple mechanic of "close button" which quite fits the theme. Though they are really kind of a bit hard.

It really feels good to unlock cursor. (I guess this is not the only entry that thought of cursor as meta element).

PS: I couldn't beat the boss. 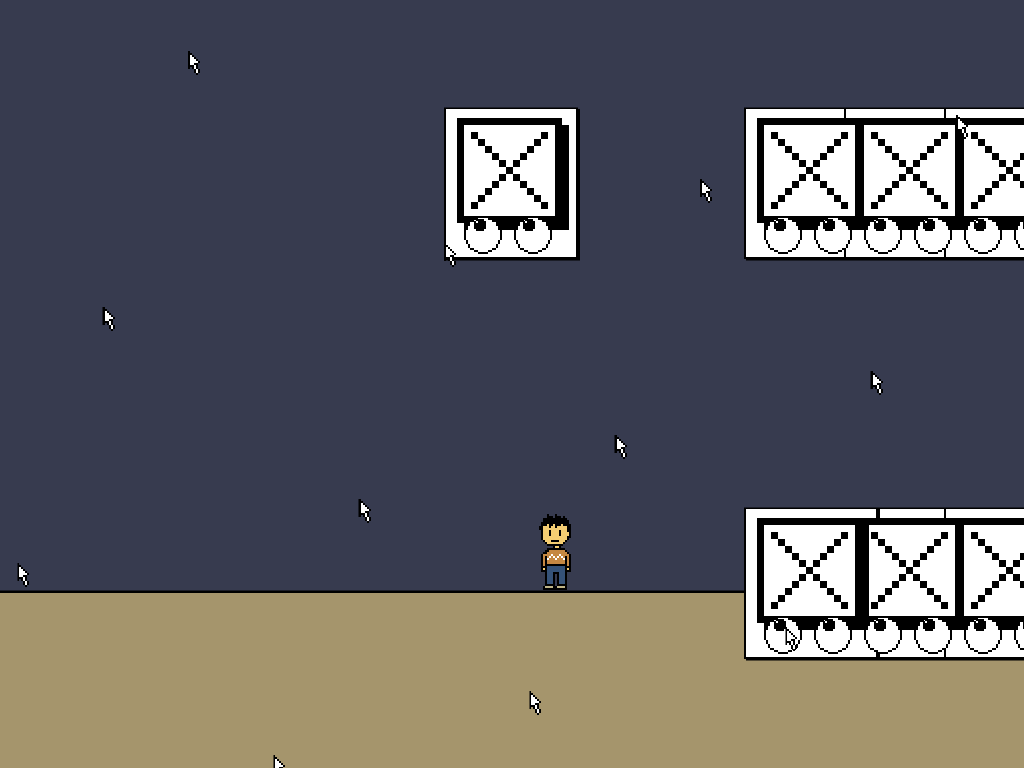 Thanks for your feedback :D That tree jump was quite obscuring the action, I agree. Not a great design choice!

Hope you at least checked out the updated version though, as I scaled down the difficulty quite a bit especially that boss (its probably quite impossible to complete it the way I intended tho)

Included an updated version on the jam page with music/sfx and balancing the difficulty more! Please check out the itch.io page

I really love some of your ideas going into this! It has some bad glitches though, mostly to do with how it doesn't seem designed for a larger screen - text doesn't go in the box, and the eye boss' third stage seems unwinnable.

I'd also say that you hide a very good idea behind a slow start. It's possible that some players won't manage the jumping on trees that get you to the first areas with your main mechanic, and some of those sections after are also too difficult.

Thanks for the feedback! The glitches are just annoying and agree that the difficulty was a little harsh (I even hid the "cheat" that players could use on the boss) Looking to tone it a notch down and to see how the resolution can be adjusted while preserving the window mode.