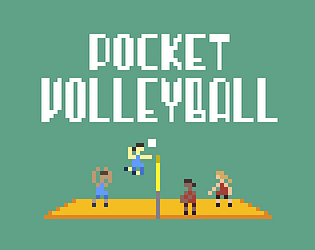 Ranked from 58 ratings. Score is adjusted from raw score by the median number of ratings per game in the jam.

Was the resolution a challenge?
Honestly the resolution didn't impose challenge?? It made the whole process easier. The whole concept of the game was designed around being small/simple and the limitations on the art made it easier to produce for me.

What did you learn?
I learned a lot. This is maybe the first time I scoped a game correctly. This was my first time working in super-low-resolution and I really enjoyed it. Trying to adapt a complex sport to a dead-simple game was a really fun design challenge.

Well made game! I included it in my LowRezJam compilation video series, if you’d like to take a look. :)

Nice, thanks for checking it out :)

If it was 1990 and tried to make a volleyball game this would be pocket volleyball. This art style is perfect match with old commodore or Atari sports games. And I also found gameplay very authentic. I know there is a unclear hitbox. But that's the spirit :D

Haha! Thank you for playing :)

Perfect translation of volleyball into a simple and low resolution game!

This was a very enjoyable game of volley ball and, given the tight resolution, I think you did a wonderful job with the graphics. They convey everything they need to to understand what’s going on!

There were a couple of things that got me, however… This one could be just me, but I wasn’t exactly clear where my hit box was. Obviously i need to press the trigger button to hit the ball back in the air, but there were times I could have sworn I was in the right spot just to have the ball bounce backwards or I’d miss all together. I kinda feel the hitbox is actually more in front of me any on me, I suppose. Maybe this is just down to needing to practice more :)

the other thing is, for vs CPU games anyway, there should be a momentary flash of the angle at which the volleyball is being spiked. Due to the game’s resolution, there’s really no way to imply it by the motion of the characters body, and, as such, I really have no idea where I should position myself, leading to it being a crap shoot if I can even recover from the opposing team’s spike.

Ultimately, these issues are minor and didn’t really detract from the fun of this game! Excellently done!!

Thanks for the feedback! You've absolutely hit on a few things that I'm not satisfied with in this release (although I'm still quite happy with what I put out for the time frame).

You're right the hitbox is in front of you.  In volleyball you put your hands out in front of you together and form what is called your "platform".  Basically you want the ball to bounce off your forearms, which you make as flat as possible.  I didn't communicate this very well in the game, for sure.  Also your character makes the platform and bumps/receives/digs the ball automatically, you don't need to push any button, just be in the right spot with the right timing.  I didn't go into much detail w/ instruction because I didn't want to bombard unfamiliar players with volleyball terminology or make the game seem complicated, but all of this definitely needs to be clearer.

On the second point, I fully agree, there's no way to really predict which spike the opponent will use.  They have 3 spikes, a forceful downward one that will hit in the front court (this one is deadly!) a fairly light middle hit and one that will *just* hit the back of the court, assuming the opponent's positioning is right.  The first and third are very hard to dig, you basically have to choose a position and hope you're right in this current version.  In a future version I will try to give some kind of brief indicator, or find another solution.  For example in this version of the game, only your player character can receive/dig the ball (receiving is what you call when you bump a serve btw, otherwise it is called a dig) but in a future version I'd like to have the game more fleshed out, with a teammate that can do more than just set for you (setting is when you overhand the ball to your teammate to spike).

In a theoretical expanded version of this game, I'd have some nice tutorialization of what you're supposed to do, what the basic terminology is, etc.  My hope was that by keeping things simple/automatic enough, players would figure out some of the finer details of the game on their own in a few minutes-- I think this mostly works but is not perfect obviously.

Apologies for the essay-length response haha! thanks again for playing & for the feedback

a bit tricky with keyboard, better on a gamepad. Simplicity in a very low resolution! The game is quite good but can get a bit repetitive until you are at least half decent with moving mechanics. Nice job!

Yup, I designed it on gamepad then added the keyboard controls in later, you can tell lol. I kept wanting to add things to mix the game up or make it more like actual volleyball but at a certain point I was terrified I'd break what I already had, which was a pretty successful loop and decently fun, altho as you say a bit repetitive. Thanks for playing & for the feedback!

funny game, very hard to master! graphics are extremely simple but it works, the overall style makes me think it could be an Intellivision game XD

I was definitely aiming for that kind of very old-school feel.  thank you for playing!

I enjoyed this! It's legitimately volleyball.

It seemed like the camera was tied to specific pixels / tiles and could have been more smooth overall. You definitely need to have the camera to get the full range of gameplay inside of the low resolution constraint, so solving this problem will be crucial

Hey, thanks for the feedback!  From my viewpoint, If you don't tie the camera movement to pixels, it's not really a 64x64 game.  I agree it would be more pleasant if it could interpolate smoothly but I'm going for authenticity here ;)  Anyway in future versions (after the jam) i will relax those standards and likely release a version with a smoother, better camera.

edit:  re-reading your comment I may be misunderstanding you, I apologize if that's the case!  it does just need a better camera in general lol

So good! I like how it follows the rules of volleyball with the same person not being able to hit it twice. But also...this taught me that I am no good at volleyball. Thanks for crushing my Olympic dreams! *runs away crying*.

There's a number of real volleyball rules programmed in (if it touches the line it counts as in, 4 touches on one side loses the point, goes under the net you lose the point etc) but by design they shouldn't come into play too often, especially since I assume most people don't know all the rules of volleyball (there are a bunch!) Also while I wanted it to be "easy to play" as in simple, I like the challenge, afterall, volleyball is hard in real life, I genuinely wanted to reflect that lol. Anyway don't give up on your dreams ;)  thanks 4 playin

That’s fun little game, maybe repetitive and limited with time but for a few session, it’s good (and original) for a GameJam game ! Nice work !

Haha, great game :D I love the idea! I would have no idea how to make this possible in such a small resolution. Controlling the player is a bit difficult though but overall super cool game!

Thank you for the feedback & for playing!!

I wish my teammate was a bit more helpful because looks like I'm pulling all the weight in this game :D So few pixels but so much fun! So far the most fun entry with fewest pixels :D +1 on perfect execution!

I appreciate the feedback & kind words! Thanks so much for playing.

I saw "perfect execution" in the comments below and agree completely. I had a three-game journey from "ugh this is buggy" to "wait no this is super precise and I was just bad." Also very aesthetically pleasing.

Hah, thank you! this put a smile on my face

Wow, thanks so much!

What the heck? We get 4096 pixels and this dev just says, "Nah, I only need 2304" :P
Seriously though, fun game where I could really feel myself improving, just a little tricky to learn at first.

:) thanks again for playing

It kind of just came together!  I wish all my projects were like that lol.  thanks for playing :)

The winning sound could use a noise pass to soften the distortion and clipping. But other than that, there's not much to say. It's a nice little volleyball game!

It was certainly hastily put together, I'll adjust it for the next version for sure.  thanks for the feedback & thanks for playing :)

Great job in converting the complexity of volleyball into simple mechanics. Not too many volleyball games out there.

Thank you!  Yeah I actually posted it on the volleyball subreddit and got lots of good feedback haha.   Many seemed just appreciative that somebody was trying to make a volleyball game at all.

It is so simple, but it makes so much fun :) To do a spike is so cool!