Turn based battle in space
Submitted by sprvrn (@vrnspr) — 1 day, 9 hours before the deadline
Add to collection 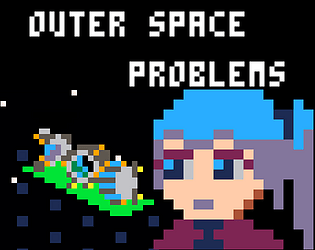 You made a really nice game in such a small resolution with mouse input and everything! Well Done!

Very nice entry! I loved being able to control everything with the mouse. Very intuitive controls. Great job!

Turn-based fighting; a board game, essentially, but with an outer-space theme. It's quite fun to play and there's an interesting variety of movements and skills -- some ships have a shield, others a laser, or the ability to "hack" which is actually altering the turn order. It's also presented in isometric rather than overhead view, which is unusual in this jam; it's a clever idea, but I think it might be unusual at 64px for a reason, because if you've got two ships, one behind another, it can be quite confusing to see what's going on (where this would likely be a lot clearer with more resolution). Nonetheless, this is a complete game, nicely explained, fun to play, and with simple but good audio. I also found all the text very easy to read, which hasn't been the case for a number of games I've played in this jam, so that's a good piece of design too. (And I appreciated the use of text ("ATK", for example) rather than some hard-to-identify icon!) Two thumbs up!

Interesting mechanics, especially the hack action, and very good use of resolution restriction. It is impressive what you've done to make the game look kind of 3D. It remembers me Into the breach. I loved the graphics, visual and sound effects, and music.

There's no much you can do when your only ship is the one that puts shields and there are no planets in the scenario.

You already played our game: Blind Bird, so we can't do anything but thank you. 」(￣▽￣」)

Great use of resolution and UI, you were able to fit a lot of information on the screen

very impressive game, the juice is great and love the health mechanic after each stage! Well done

Submitted
Set Fire to the Empire!
LikeReply
clemonadesSubmitted1 year ago

Really great game on every aspect. Nice feedback to the player.

I really like how much 'juice' and feedback your game has. Each hit feels important, and that shows me that polish is just as important to you as content. I love when devs put so much attention to details. Props to you.

Everything was clear, including abilities (it took me a little while to figure out how to move but I managed), but to be honest, I found your in-combat sprites to be pretty hard to read. Maybe it's because I don't know much about pixel art, but it was difficult for me to read them. That's pretty much the only thing I didn't like about it.

I mentioned this in your devlog, but I feel obligated to repeat it here - love your pixels and gui design! The music provides great atmosphere as well. Nice evolution of missions to teach the units. Plays exactly how I'd expect and want for a tactical game. I didn't initially read the instructions so I felt very confused by the "hack" ability. SO I guess I could nitpick that and say maybe add an in game explanation. Maybe add a slide to your tutorial. But really great entry!

The first LowRezJam game I played and I was shocked when it all worked the way I expected it would! A proper tactics game! Wow! A lot of work and everything seems punchy and good. Now it just needs a story!

I loved that the lasers looked like hot dogs!

Nice use of colour and space, I didn't think the amount of information necessary for a game like this could be conveyed with so few pixels but this works quite well, I never lost track of who my characters were, who the enemies were or what was happening in the game. Really cool.

I love tactical games like this one, and it is really well done.
The space is nicely used, we can still understand what is happening even when the game is getting crowded. The music is ok and suits the game without bothering you.
A harder mode would be appreciated =P

This was really fun! Didn't manage to figure out what the green Y-shaped "hack" option does though.

Thanks! Hack ability switches 2 "actors" places in the turn list.

Ah, I see. I can't select any actors though? They're all greyed out.

You select them in the turn list. Sorry if it was unclear !

Ah, I see! Thanks for clearing that up :D