An explosive train ride made for Godot Jam
Submitted by dalton5000 (@daltondoesit) — 11 hours, 10 minutes before the deadline
Add to collection 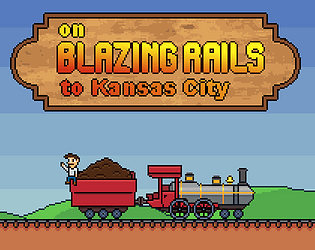 Nice graphics, interesting game. I included it in my Godot Community Jam compilation video series, if you’d like to take a look. :)

Very nice assets and gameplay, good that I didn't had to blow up those birds to keep machine running :)

Really enjoyed it. was playing it with my brother for quiet some time on a laptop. one person walking the other one shooting. We had an amazing time. Thank you ;)

I was a little discouraged that the birds didn't drop any hearts. That makes the bombs much less useful...

Thank you for comment, it means a lot to hear you guys had a good time.
I am currently working on a extended version with more gameplay, landscape and also health drops. I hope you will enjoy it

Got a segfault on close on linux.

Thanks eons, you helped me out quite some time in the discord channel, I think even with this project. Much appreciated

Theme interpretation? Can't get better than this.

This game reminded me of youth when I spent playing flash games on web.

My train was constantly beset with birds armed with weights, and the engine would frequently catch fire. Occasionally a crazed lunatic of a man threw bombs from the roof.

Y'know, I wouldn't normally focus on difficulty in a jam game, but everything else - the graphics, the sound, the controls - are just perfect. They don't aim for anything they don't need to be, and as a result, it looks, sounds, and plays really well. My only problem is that it's too easy: run left when the birds are flying in from the left, run right when they're coming from the right. Occasionally chuck a few more lumps of coal on the engine. You will never be hit, and there's no reason not to let the birds go un-exploded.

At 200km, I got bored, and decided to stop the train and bomb the engine, because that's the sort of person I am; and all of a sudden, things got challenging, because I had to be stood on the bomb cart, find an opening in all the one-tonne bird droppings, and aim my bombs correctly. It was hard! And I died.

...Sorry, I'm back to talking about Southeastern Rail, aren't I?

John, thank you for the indepth review. It was a joy to read and I'm happy to tell you that you're the holding the highscore as far as I know :).

I totally agree about difficulty, I am currently trying to improve that for an after jam release. Very happy to hear you enjoyed your time nevertheless! Cheers mate

I really enjoyed that one, the visuals and sound effects are great, and the music well fitting. The gameplay is clever and well implemented, it's overall a well polished little game. Impressive for a 3 day jam!

My game sometimes crashed when items were colliding (the cart in the intro, coal, etc).

Thank you! It does only run smooth on firefox, I have put in a disclaimer but it doesn't show at the Jam Page :/

It's a good game, but i had some problems on Chrome, however, Firefox saved my fun. You did a good job ;) Congrats

Very  good, nice graphics and cool idea, reminds me of old nes games I used to play asa kid. Web version has a bug where the stone gets stuck on the train and the game basically crashes, happens every time.

Thanks for your comment. Reminding of childhood memories is the biggest compliment you could have made my game!

The browser export only supports Firefox, it's a matter of the engine and not to change, sorry.

I traveled 7km with only bombs and water (igniting the engine then putting it out). Not the right way to play. But very fun.

It can't be the wrong way if you enjoyed it :) Thanks for your comment

This was a really fun game! I had a blast trying to hit the 1tonne carrying birds, accidentally hitting the engine with a bomb and then trying to put out the fire!

Thanks mate, glad you enjoyed it!

At first I was only throwing coal and blaming birds until I tried to move with the arrow keys, lame of me, haha. It's kind of fun, hard when unlimited flocks of birds keep throwing kg from nowhere. I left the train at 69km and started a farm. It'd be easier. Nice job!

Understandable! Glad you enjoyed the experience and best wishes for your life as a farmer.

I like it :) Didn't see the bombs the first time, was just trying to water bomb and coal the birds with little success and ended up blowing up the engine the second time with a miss-timed bomb :(

Did you mean to label the mac version as android? I got excited to try the mobile version before I realized there probably isn't one actually XD

No idea why I labeled it android, thanks for pointing it out :D

Fun game. Had a few runs. Got to 39km. Controls were good, throwing mechanic felt satisfying.  However, most of the gameplay focuses on shooting birds and avoiding their cargo and not keeping the engine within optimal temp. range.

I think the theme interpretation would be closer if the environment affected the engine temp directly, like birds throwing water on it or similar and focus the player more on keeping the temp, rather than avoiding the birds' cargo.

Thank you for playing and commenting. I think you are totally right about the enemies, i had something similar in mind but time ran out. I will add more diverse gameplay in a future build.

I see a lot of potential! Got to 53km and I would love to see more content in upcoming updates :)

A bit simple, but still fun and well executed, nice graphics and sound.

A more detailed score would be great because there is not much use to kill birds otherwise. The throwing mechanic felt really good.

This game is great.  I immediately overheated & exploded my engine and it put a big smile on my face.  I played a few more rounds and it's genuinely quite fun.  It's amazing what a difference some sound/music makes too (I've played a lot of entries without either, which is understandable of course).  Great job overall!