Prompts are now live. A copy can be found here or on the main page.

The official Discord server now has reaction roles. You must choose a role to stay in the server after joining. Previously you had to ask an admin to assign you a role. Now you can go into the housekeeping - #Roles channel and add select one of the reactions on the message.

There will be 12 prompts released for this jam ~24 hours before the official start, to give you time to plan your approach. Come join the Discord and say hi in the meanwhile. I'm also running an art jam at the same time, feel free to check that out and maybe join in with that if you like making art.

Woop woop! Just over an hour before submission deadline!

Just a reminder that there's just over 2 days left for submissions. I have still to finish my submission so I'll be trying to finish that up over the weekend. It's not the most gamey-game and I don't think I'll manage a mechanic for all the prompts but I think it'll still live up to the spirit of the jam. If you've got some spare time this weekend and were considering entering, just submit whatever you've got.

The prompts for the first 12 Days of Sketchmas Game Jam are:

The jam officially starts in 24 hours but feel free to start thinking about your approach to the jam. Again I'm happy to take suggestions for how to handle prompts for future iterations, release them one at a time or all at once, release them early or at launch etc. I'm also considering running a prompt poll a few days/weeks before the event in future.

Enjoy, I hope you find these prompts inspirational and I look forward to seeing your entries!

Reply
12 Days of Sketchmas Game Jam community · Replied to aradarbel10 in Preparing the Prompts, checking them twice
drentsoft201 days ago

Sounds good! You have an extra week after the official deadline to catch up anyway, because let's face it at this time of year, time gets very short, then quite long then very short again depending on social commitments.

Hi I've created a new Discord server for the Game and Art Jam(s).  Look forward to seeing you there. The server is still in development so expect frequent changes.

Getting ready for the jam. T minus  (just under) 10 hours until the prompts are released, 34 until the event proper. I know there aren't many sign ups yet but just to get a sense, were you planning on doing one big game or a few small games?

Very nice idea. Experienced the same bug on the last level but was really enjoying it up until then.

Interesting idea but found it a bit troublesome, I'd frequently mis-hit the ray trying to position the prism in time.

Nice simple game. I agree that a little challenge would help. I also feel like being able to rotate the camera would make it more comfortable to find the gems without compromising the hunt.

Quite interesting but I didn't quite get it. Felt like having to click move then picking a direction was a little hindering.

I felt bad shooting them at first then the room started shaking and I just spammed that fire button! Nice idea, interesting visuals.

Nice concept. Didn't get very far but I like it.

Very nice concept. I think it could be fleshed out into a full game. I found the controls a bit trippy though. When it was moving round from the top/bottom it was fine but if I stopped on a vertical side I found it very hard to use A/D to move up/down, natural instinct was to use W/S.

Very nice design. Felt like it could do with a little forgiveness on the collision but otherwise very nice, simple aesthetic and a really nice idea.

Super win!! *flash flash flash* Pretty fun game. Though I did find the sweet spot on level 3 which is a bit crazy. Ship's just spinning on that point forever. 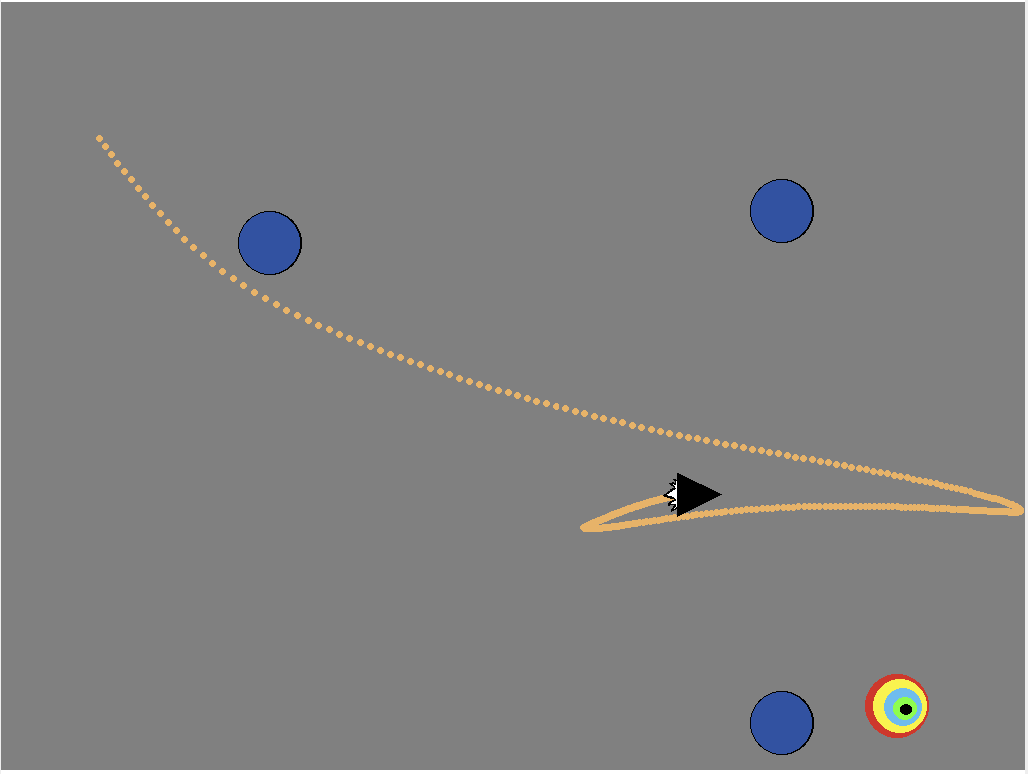 Ah, thanks. Originally it was only supposed to show the Upgrade button after you selected a stat but I added something that made it show before a selection had been made and I didn't notice. Thanks for taking the time to reply.

Thanks for the feedback. I got combat working about 20 minutes before the deadline hence the lack of feedback. May I ask what bugs you encountered? The only one I'm aware of is the enemy pushing you until you get stuck in the trees.

I like the idea and the graphics, the controls feel smooth but I only really managed about 15 seconds :(

Very neat idea, took me a couple of goes to get the controls fully but otherwise really like it.

Very nice start and a decent amount of polish on the bits you managed to implement :) I quite like the storm fog effect.

Very nice, liked the graphics and it fit the theme well but found it a bit odd that you have to move into a gem once you're the right colour, simply being in contact when you change colour doesn't trigger the collection.

Really nice idea all round, with a bit of polish, could turn into a really good finished product :)

I really liked the visuals and the simple but effective gameplay :)

I really liked the visuals, music and simplicity of the controls but found the game a bit unforgiving due to the randomness.

I would like to suggest, in a non-critical, hopefully helpful way, that in future versions you could create different groups of stars that you know are fair, such as 2 red, a blue and a white last. Some can be intentionally more difficult, 3 reds in a row with only a blue at the end, some spaced out more etc. You can then randomise which groups are spawned and randomise the actual temperatures of each star within a range relevant to that colour of star to increase or decrease the difficulty as required. This would allow you to more finely control how the game is played whilst still giving the feeling of randomness. You would probably still get some nasty combos but it should hopefully make the game feel a little fairer.