Play as a player playing a game - with increasingly absurd distractions. Can you clear the easiest platformer?
Submitted by flybymysky
Add to collection 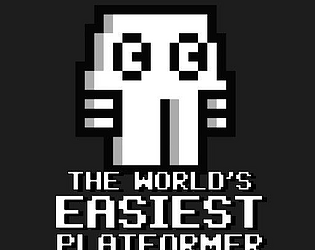 How does your game fit the theme?
You play as a player playing a game as your environment is going out of control. But you gotta clear the game.

this was hilariously frustrating!  great game concept and I loved how it ramped up each level!

interesting concept, it fitted the theme quite well!

One of the browser games with better 3D models that I have seen so far.

I like the execution of the concept, the environment surrounding the theme of loss of control was well portrayed, and quite amusing too.

- The platformer was not easy! The vertical jump distance could have been improved to make the game feel better, especially in the earlier levels, but this might cause problems in the last level since the shortness of the jump became a boon on that level. Perhaps decreasing the distance of the platforms in the earlier level would make the game more accessible. It does not feel good if the player cannot even get past the first level without dying.

- The use of 3D models feels a bit wasted. The quality of the 3D models are very good, but the emphasis and the points of interaction by the player is predominantly on the computer, and specifically the platformer. But the platformer is lackluster in comparison to the 3D assets used. Perhaps adding more animation like the bird flying in would add more value to the use of 3D models. Or not being confined to the platformer would make the computer feel more realistic, like the bird "alt-tabbing" or "alt-f4ing" the game.

- The use of sound could have been better, I think the use of environmental sounds is used a bit too sparingly. The divide between the "real world" and the PC could be further emphasized with sound. Stuff like having chirping noises at the start to foreshadow the birds arrival would be quite funny. I am torn about the use of a jackhammer for the sound of the bird, its pretty funny but doesn't sync up well.

- Oh you should add a note regarding how to start the game, or highlight the spacebar. The intro ends on the pan out of the monitor and would stay there until the spacebar is pressed. Without any instructions, the player might not know what to do at the start.

Well this certainly fits the theme, trying to adapt to how the real world affects your ability to play the game certainly had me laughing.

The title is very fitting :D This was fun to play. Thanks for bringing it to the stream:

Haha, really funny concept. Showing why things are out of control was a nice idea.

Nice idea for the theme! Liked how it change you control, but the platformer itself was a little bit hard to get through :( Couldn't get too far((

Brilliant idea and great execution! Love that you can see the keyboard in the foreground and then play the game in the background too, so fun! :)

The game looks beautiful and I love way you show why the game is going out of control, makes it easy to understand. This is one of favorites from the jam!

Submitted
Out Of Control Fishing
LikeReply
Quentin DelvalletSubmitted190 days ago

Oh, great presentation! I kinda wish it had more level. To extend on the idea, maybe the bird could just press the space key at random intervals, or random direction keys. Anyway, cool game! If you make a post-jam version maybe you should change the audio though ^^

Really like the take on the theme, you could have just made one game but you put a game inside of  a game! Very fun to play

Lovely idea! I included it in my GMTK Game Jam compilation video series, if you’d like to take a look. :)

Interesting game concept, wish that there'll have more levels for us to play

Thank you so much! Love your cute avatar :D

Excellent game! The presentation is perfect. I was smiling the whole way through.

I hope you can turn this into a longer, full game.

Thank you for such kind praise :) We will definitely work on this further!

This is a really funny meta interpretation of the theme. Love the art style too! Very simple, but polished and not distracting (well, it's distracting, but that's kind of the point). Great job!

Thank you so much! Glad you enjoyed it!

Of course! We'd love your feedback on our game as well. SpaceBus

This is very creative! I love the low poly artstyle! If I had to change one thing, I would give the player more jump height. I understand why you didn't, there are only three levels, so naturally there is a bigger difficulty curve. Sometimes I felt like I was just barely making jumps (maybe what you want? I'm not sure). But overall, great game! Hoping this gets top 100. Here's my game,  https://itch.io/jam/gmtk-2020/rate/697413 feel free to check it out:)

Thank you! The initial intention was to make it a difficult/frustrating game, but from what we see, we will look into whether that should be the case (or so soon into the game). Perhaps making the platformer slightly more fluid will improve the experience. Thank you for the feedback!

I love the fact, that the game is so important to the player that he doesn´t do anything about a bird hammering his keyboard :D
Fantastic idea! Seems a bit to close to the reality of my sometimes way to crowded desk hahaha

Submitted
Out of time
LikeReply
flybymyskyDeveloper191 days ago (1 edit)

Haha thank you! Oh dear, hope a bird won't come in and destroy your keyboard haha

The idea is just awesome.

That was a really neat idea. It fit the theme well. I just wish the jump was a little higher, I was struggling before any challenges were introduced.

Thank you! Yes, will likely adjust the difficulty, might have made it too difficult. Didn't want it to be easy but ended up making it harder than expected. This is helpful!