Nice job! I liked how it went back & forth between two different game modes , which is a neat thing to do in a game jam. Some of the sound effects were great. And I think I could pick up on what you were going for with regards to the story.

Yeah, my jam games usually have bad controls haha. I need to work on that.

The AI is deceptively simple! The level design does a lot of work to make it feel so smart.

It'll be turned into a full game one of these days.

Hey there. The blue buttons are key: they must be held down by a heavy object to keep certain doors open.

If you find yourself having lots of trouble with it, here's a handy GIF:

Unfortunately, the game doesn't have saves yet. There's an update coming in October that will fix this. Thanks for playing!

Thanks for playing! I'm glad to hear you enjoyed it 😁

Thanks for taking the time to play it! 😁

I was aware of that bug, but I didn't realize it was exploitable anywhere 🤔 thanks for letting me know.

You're right, it is a text-heavy game. I don't like lots of text either; I should have made it skippable.

Thanks for playing! I also rated your game.

This was a lot of fun! I'd like to see this turned into a longer game.

The only criticisms I have are the kinds of things you'd expect from a jam: running into enemies right after Green Shell ends, for instance.

I agree that holding X and C the whole time is a problem. I've been thinking a bit about how I could've improved that, but I don't have a solution yet. If I return to this concept, I'll probably rethinking the controls altogether.

I agree, the gameplay could've reflected the theme better. On paper it was supposed to, but some ideas needed to be cut. Thanks for playing!

Thanks! Glad you liked it 😁

Thanks! It was my first time doing hand-drawn art 😳

Excellent game! The presentation is perfect. I was smiling the whole way through.

I hope you can turn this into a longer, full game.

I love this game!

It was really hard, but that's probably a good thing.

I like the concept: taking an Action RPG setup & adding a downhill skateboarding section to it.

I feel that if you had made the player constantly move in whatever direction they're facing, the game would be more fun, and also it would've fit the theme even better.

The level design was pretty good. It went in lots of directions, and contained variety between wide open spaces & tight rooms full of enemies. I did have trouble reading the environment & understanding the objective at first, though.

I like the concept. I feel like it would work pretty well as a minigame, or possibly as a puzzle game of some kind.

If I were to add anything, it would be to make the weapons feel more powerful. The shotgun was really well done, but it felt significantly more powerful than any of the others.

Glad you got it sorted out 😅

Wow! Glad you think so 😁

Hey there, I appreciate the feedback.

There's a planned update which will include generous checkpoints & a few other quality-of-life improvements (like making the coat rack simpler to deal with, etc).

If you've claimed the game, I think you'll be automatically notified when the project is updated. 👍

It's a custom HTML5 page. I used plain JavaScript to make it work, and Bootstrap to make it look pretty. 😁

Thank you! I promise not to change it :) lol

Thanks! I found it earlier. I appreciate you playing!

The idea is fun, and it fits the jam very well.

It's also got a lot going for it. I think it's designed about as well as a jam game can get. The levels (that I managed to get to) were all good, and the challenged certainly ramped up.

I only got as far as the level where you have to push one of the cones to the end of the track with the turns; the one right after the coin collection level. I was just getting nowhere lol.

I had fun, and the execution was great. I'm not sure I would like to play this as a full-length game though lol. Maybe as a minigame within a larger game, perhaps a larger driving game.

Thanks for playing! I thought the countdown was vital.

I'm not sure what you're asking 🤔

I appreciate the donations! That's more than two months' hosting!

I appreciate you showcasing the game! :)

Protect Your Family From Feral Hogs!

Your yard has been invaded by 30 to 50 feral hogs! You are the only thing that stands between them & everything you hold dear. 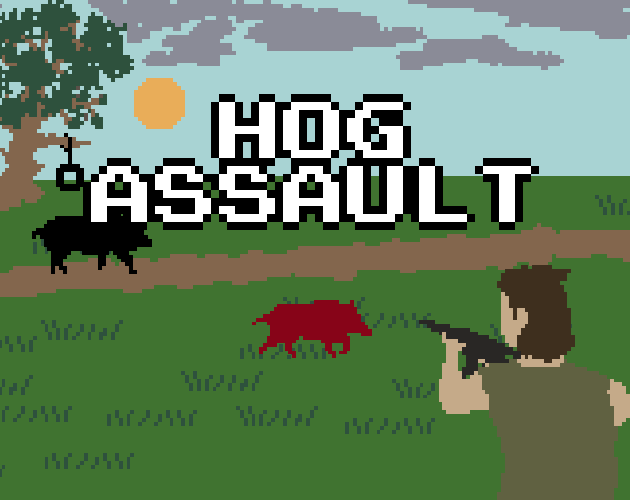 I'm a big Hitman fan, so this was fun to play!

We talked briefly in Discord about the cursor needing to be over things to interact with them. In my opinion, the game would've been improved without that.

It's also too easy to get shot at for entering a restricted area; most times, I didn't see the warning until I was already there. Coincidentally, NoClip's new Hitman documentary discusses how IO intended to change this about the Hitman games. I recommend watching it, it's really informative!

Something about this game really brought me back to when I was still discovering new levels in the original series of Hitman games. I found a few different leads for beating the game, though ultimately I just went with the simple method of disguising my way to the target.

Overall a fun game, and I would like to see a full version!

Fun concept. Reminds me partly of Closure, and partly of those minigames in Donkey Kong 64 where you had to walk through a maze, lol.

It was executed well. I liked the progression from level to level, like when you added a second gate before the exit.

I don't think I was ever in danger from the skulls, but the spikes did get me a few times.

Cool concept, and a pretty polished execution! I wasn't expecting voice acting, that was a nice surprise.

The difficulty ramped up well. I felt like the last round really leaned a lot towards one answer though, which made it feel proportionately easier than the other ones to me.

First off, the aesthetics are adorable. What an idea to have Patty the Platform escort the character to a comforting wall of pink goo.

It was very difficult. In some ways it felt fair; in others, not as fair. Perhaps this could be solved by making the player feel completely in control of their horizontal positioning? I mostly achieved this by bouncing the avatar to the left or right, which takes up vertical space, which can get you killed. That might be an intentional decision, though.

In the final level, with the two collectibles that are at about the same X position but one is higher than the other, I decided to just skip one of them. But then I found out I needed to collect it, and I panicked a bit. But I figured out the trick for getting it, and that felt nice. (I see now that you solve that problem in the GIF you uploaded)

I figure you are aware it doesn't have sound haha. That's probably the most obvious detriment.

This is seriously polished.

I also struggled with the difficulty, and it took me a minute to figure out the menu lol. But this was excellent.

This is a cool idea. I think it fits the theme very well.

Also the game moves pretty slow. I would increase the speed. I would also make it so that holding space isn't necessary; I'd either choose no button at all, or you must press the button right before you bounce.

Overall, you've got a prototype showcasing a cool idea, and it does fine in the graphics & sound department.

Thanks! Adventure is probably one of my primary inspirations in general.

Thanks! I was working on SFX when the deadline came :(

Some game engines prefer your sprites to be split into individual files. Sometimes, you prefer to work with them that way yourself. Whatever your reason might be, this command line-based tool will automate all of that for you.

It might look a little scary at first, but if you give it a shot, it should do the trick for your every time.

Got a suggested feature you want it to have? Leave a comment!

Retro Slasher is an 8-bit survival horror game based on 80s campground slasher movies. It plays like a game from the 80s, too!

You and your friends are setting up for summer camp, when a mysterious killer begins stalking you one by one. Use your survival skills & the items at your disposal to defeat the killer, before you all end up dead!

Thanks! Glad you enjoyed it :) I'm happy I could make something entertaining and relatable

Want to feel the dread of applying for a job, without the reward of a steady paycheck? Check out Job Application Simulator, a satire about corporate job applications!