Cats go in the box, but don't necessarily stay in the box.
Submitted by EBwiz (@EBwiz) — 1 hour, 41 minutes before the deadline
Add to collection 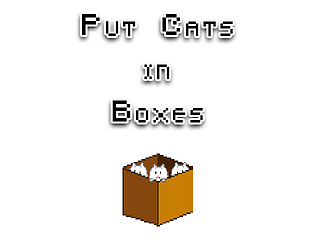 How does your game fit the theme?
Herding cats, the most unherdable creature.

This game is very fun. Well done. The art is great!

Was not disappointed. was exactly what I expected and more.

Saw the title and had to play... was not disappointed :)

One way to make the game a bit more challenging would be to maybe have some sort of consequence for failing to get the cats into the box, like a timer or something? Otherwise, cute game, nice art and animations!

Very nice. I really liked the cats :) I especially enjoed a bug where the box floated out of scene with cats inside :)

I see cat, therefore I have to play.

What an adorable game, I giggled when the box started to move. I got up to level 13 and it gets crazy!

I read and enjoyed your devlog - it's the first postmortem I've seen here. It's great that you've set out to ship a game over a weekend, congratulations. I can tell that it's a very special feeling. I also have been in the games industry as a non-programmer for quite a while now, but have only picked up coding in c# over the last year or so. Designing games is awesome, but being able to create them from scratch is even better, so great job going down this path and keep it up!

Some thoughts for the game:

Very challenging, it took me a while to get the first 5 cat's in the box. The cats were hard to get under control :P

As for the progression system in the game, it needs work

Good game, but audio got cut away for no apparent reason and I completed levels without putting all of the cats in the boxes

That's a nice game! It is a very original idea, good work on the presentation. You made a very good job. Keep creating games!

The pixel art is very nice, especially the cat sprites are soo cute!
Though the game is very simple mechanicly it still wa pretty fun!

Haha the cat looks like my cat.  It's a really cute and simple game. I hope you learned a lot of new things.  Please check out my game when you have time :D

Out of control cats in a box! awesome thematic, is a really fun game, it gets more difficult using the trackpad due to small the hitbox, but you did a great work, too bad for the music that suddenly stopped.

Submitted
Out of Boombox
LikeReply
GryphShot2 years ago(+3)

Cute little kitties <3 A minor complaint, however.. making the hitboxes on the cats just a teensy bit bigger would help the game feel better. Often times it seemed as if  the cats failed to move just to spite me once more.

Cute idea, though in reality the cats would probably want to jump into the box rather than out. The levels seemed to end before all the cats were in the box in later levels, and the music just cut out after a while, but a fun game despite those minor hiccups.

Simple game, but original and fun.  A really nice use of the theme too :)

ahh my hand, nice design and simply 'out of control' game. haha

A little simple and the cats can be hard to grab, but the art is cute!