You are trying to put the fires out, but can't keep control of your fire hose!
Submitted by Ateune (@Vashsan), bteune — 29 minutes, 13 seconds before the deadline
Add to collection 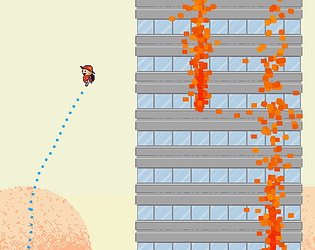 How does your game fit the theme?
Your firefighter's hose is out of control!

It is fun to move around. Good game.

It's really fun game! I didn't manage to get the highest flame, is there a special trick for it?

There are a few tricks all relying on fooling around oddly with the physics of the game, however, we did see that on some machines with lower frame rates an increased difficulty while trying to reach higher places. If we coded it more properly instead of quickly this wouldn't have been the case.

It was so much fun flaying around!!

Is it intentional that you get a boost like a really huge boost if you fall down to the ground and has like the water jet on? Was hilarious to play with, but I wasn't sure if it was a bug or not XD

Also tell the player that he ain't going to take damage from the fire. OR let him take damage XD. I was stuck in the really first area because I was afraid to get hurt XD

The last one isn't really a complaint, I just was a little confused that nothing happened after putting all the fire out. But I think you just hadn't enough time to put an end screen or something.

But don't get me wrong, This game was so much fun to play and it has a big potential! Keep up that great work! :D

Also, pls feel free to check out my game as well :D

All great feedback! Thanks for playing our game!

We allowed for some bouncing in the game when you impact the ground really hard. Not sure if we will leave it in there for future iterations, but for now it's a "feature". We agree there should be better hit notification on the fires! We didn't end up having enough time to add player health and being damaged by the fire. Also didn't get to the ending... Good old 48 hour game jams...

I'll definitely take a look at your game! Thanks for playing!

I've seen some other point out about feedback when you actually hit the fire so i won't expand on that more! Overall i really liked playing it. Flying around with the hose was super fun so its a cool concept. Would make a really nice mobile game as well i think!

I hate bringing this up but... Perhaps it wasn't the best of ideas to use a copywrighted song in the game...
That aside, it's a neat idea!

Yeah, we had some placeholder music that we put in and then ran out of time and forgot to change it. We have a newer build with new music waiting until the rating period ends. Appreciate the feedback!

Couldn't put down the last fire. I like the idea, but would like more different "types" of challange how to use the gun to beat the flames.

It's a little confusing at first, since there's absolutely no feedback to suggest that the water you're shooting is having any effect on the fire - perhaps the flames could become smaller as the fire loses "health"? A hissing sound effect could also help the player to know that they're doing the right thing.

Thanks for the feedback! We definitely could have handled hit registration for the fire better. Seems to be a pretty common theme among those that played. Really appreciate you playing our game!

Cool idea! I would have loved to see some kind of feedback to know when I'm hitting the fire. Trying to maintain control with the hose was a fun challenge!

Cool idea and I enjoyed flying around. The game needed more polish to make it a better experience!

Thanks for the feedback! There is definitely some jank in our game. Time was short and the jank just ended being a "feature". haha

good idea, bad execution... I enjoyed it tho

I'm glad you liked it! it was the first game my brother an I have made together and with unity! :) Our next version will be better!

Fun little game. I enjoyed playing it. At one point I forgot that I was able to walk normally because it was funnier to just fly around. I think the game would be better if I was able to see how close I was to put out a fire, but else well done :)

Thanks for the feedback! We definitely could have added better user feedback when the fire was being hit. Glad you liked it!

cute and very funny idea! i only have a small sugesstion to give some feedback when the fire is actually being hit, because i was never sure if it counted if i aimed too high at the fire. still an absolutely great game

Really appreciate you taking to time to play our game! We loved making it! You're spot your feedback. Definitely didn't give the user enough notice when they landed their shots on the fire.

I put all the fires out! Lol, took a little getting used to. But once you get a good method, easy peasy.

Great concept, solid sound art and programming. Keep it up!

Thanks! You have a pretty great game as well! Appreciate the feedback.

This was a blast of a game! Played it once, thought it was great and then played it again with the challenge of only using the hose to move! Should definitely add a time and make it challenge game!

Thanks for playing our game! Our end goal was to have a timer that you were rushing to beat, but ultimately the game jam timer did us in on that feature.

Really funny, good job guys :D I managed to extinguish all fires, but I doubt there will be many survivors :') Having AZERTY made it a little harder, but pro gamer right here!

MLG Gamer right here with ASERTY and sticking with it! Hahaha! Thanks for playing our game! We really appreciate all the feedback! Nice game you made as well! I loved the lighting.

Very nice game, My stupid a** took way to long to think about using the water as a propelling device.

Had a lot of fun playing and I love the background art which was very beautiful.

Controls felt really good, had a blast flying around! :) I could see this idea being pushed further with a nice story and a few more mechanics. Well done! :)