Destroy the world
Submitted by Verrazano, sohfeeuh — 3 hours, 47 seconds before the deadline
Add to collection 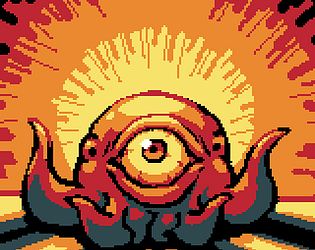 Ranked from 65 ratings. Score is adjusted from raw score by the median number of ratings per game in the jam.

How does your game fit the theme?
You're an unstoppable out of control monster rampaging through the world -- Controls: 1,2,3 for abilities, LMB to accelerate

Good game! I love the graphics, the cover art is great!

Nice mechanic, I enjoy to control the monster but I missed some way to lose.

I just rated your great game! Thank you very much for watching the stream yesterday!
I would appreciate it if you could check out my game too!

Love the art. Love being an unkillable monster. I do wish hitting a wall wouldn't reset your acceleration. Slowing down feels bad.

Hella cute! Loved the cutesy art and earth friend is the cutest!

The abilities were a life saver, and I ended up backing up into walls to accelerated when I could.

I really liked the feel and aesthetic of this game a lot! All of the controls were very intuitive and I had a lot of fun playing. Excellent jam game!

I like this game a lot, it kind of reminds me of Rampage, an older arcade game! I had to go back to read how to play from the game page but once I got it down all hell broke loose lol

Submitted
Work With Me Here
LikeReply
Team AISubmitted2 years ago

Wow, that was awesome! Really loved the concept and art. Character felt a bit janky to control at first but once you get your momentum going it's super fun. One of the best I've played!

This looks so awesome! I wish I can play but only have a mac.

Definitely a unique idea, I had a lot of fun encouraging an  unknowable monster to destroy civilization. The limited specials moves give some nice tension while you're racing against the clock. Am I the baddie?

it was really fun and CUTE , the 8 bits art is sooo aswome

Submitted
Highway Out Of Control
LikeReply
Miniver GamesSubmitted2 years ago

Really fun to stomp those villages (as rude as that sounds)

Wow! I really loved this game! The art is great, I hope this team does something for https://itch.io/jam/lowrezjam-2020

Wow again! My team had talked about something like this during brainstorming but you did it 100x times better than we talked about. So cool to see a giant monster game be so smol

Cool game!  I didn't realize I had abilities until I read your description, wish I had noticed that sooner or there was something in game that told me (maybe I missed it?)

This was really sweet. I like the splash screen a lot, it pulled me right in. The extra mechanics kept the game interesting and created a nice balancing act between speed and control, which is, I think, what you want with this style of game. Really well done!

Wow, this is a really awesome game :) The monster is super cute and the art is really well done. Big props.

I really like how you interpreted the game theme since you can apply it to both the player and the game itself. No matter what the citizens do, the monster is uncontrollable and desolates everything and the mechanics of the monster definitely take some getting used to. It was fun to figure out how I could use his fluid movements to my advantage. The monster can be pretty slow, but if you figure out how to leverage your abilities, you can efficiently destroy everything. It's all about figuring out how to control the uncontrollable ;)

Overall, it was really fun and CUTE. I look forward to seeing more!

This is really nice. I especially love the art in this one.

The cthulhu guy is really cute, I love it! It was fun plowing through the town and the artsyle is nice.

Took me some time to figure out what the second ability does, seems like its destroying walls.

I would love to see military more involved, trying to chase you down.

it's 3 consecutive aoe blast each one has a 1/4 chance of destroying anything in range.

So I think this game has a lot of potential, let me start with all the good: The art looks awesome, the game sounds pretty juicy (but could use some background music), and it feels beefy to plow through all the buildings! Also, the powerups feel great! There is one thing that kept me from enjoying this game to the max: the speed of my character. He is waaaay too slow. the fun of these kinds of games is ultimately to be an unstoppable force that just blasts it's way through buildings, defences and whatever you can think of, so I would definitely make him super fast (see APE OUT for a great example of this kind of top-down mayhem game.) The powerups would still be very useful, as you could increase the defenses that the people had. Anyway, great game. I would have loved one more thing btw: I know he goes out of control sometimes, but it would have been great to make him charge up a super ultimate attack that just turns him into an utter beast! That would fit the theme really well too :) Good job making this!!

Ps. One more thing: I love the idea of a dash ability, but I'd love to see it work in a way where it charges up automatically every x-seconds, instead of having to break buildings to charge it!

Thank for giving the time to give quality feedback, we really appreciate it. I think the max speed could have been increased a little bit, but I think the main problem was probably the initial acceleration is really slow. There isn't a hard speed cap in the game, there's a limit at which a drag force is applied, so with dashes you can break that limit. I think the biggest mistake was not allowing players to plow through walls at higher speeds.

Sounds good, I'll be waiting for a post-jam patch!

Wooooooow that's cool! That heartbeat made me scared tbh hahahah, but overall the whole concept is solid. Nice!

Great game! Sounds are chosen well and so fun controlling the monster!

PS: We also wanted to make the player unstoppable but later chose another topic