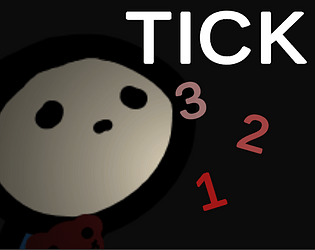 How does your game fit the theme?
You lose control, on a timer. You quote unquote "Run out of Control"

But I like the idea and the style - nice job!

You guy(s) made the "Month Of Scares" come early to my channel this year... But I think you have something going here, keep working on this Idea!! Someday you might scare Markiplier!!

Submitted
This Game Is Not Broken
LikeReply
SuperchocolatemilkshakeSubmitted2 years ago(+1)

You guy(s) made the "Month Of Scares" come early to my channel this year... But I think you have something going here, keep working on this Idea!! Someday you might scare Markiplier!!

Submitted
This Game Is Not Broken
LikeReply
ilPrinniDeveloper2 years ago(+1)

wow thanks for making a video! I Really appreciate seeing a video of somebody playing my entry, it provide so much information to me in how people play it. Thank you very much!

An atmospheric game, that's for sure. Spooky.

Look who's game I stumbled across on this game jam!

I think the ambiance of the game is really nice. There's some work to be done with conveying information to the user. Things like what is your goal or what is the setup. I've been running around aimlessly not knowing exactly what my purpose was.

The ticking was creepy and liked it's effect, but it had no counter play so it was quite frustrating when you stopped and the ghosts just caught up to you.

Keep up the great work! Overall I liked the way you approached the theme.

hey hey thank you very much for the feedback, I'll have to keep in mind for next time to make the objectives clear. Especially in a jam where it might be unclear if I even implemented an ending. Cool to see you on itch too!

Interesting idea. I couldn't find the end (if there is one). The chasers are just too fast. They could be offscreen and still reach me while I'm frozen. If either they were slower, or if their follow range was smaller so you could lose them, it would have worked a lot better. I do really love the atmosphere though.

Thank you very much! But yeah I defiantly overtuned the enemies speed and chase potential. Thanks for the feedback

This is a nice, spoopy game. I'm usually not a fan of horror, so the more subtle approach, focusing more on atmosphere than scares, made this more interesting for me. The maze was maybe not that interesting, and the mechanic of being stopped, while conceptually interesting, resulted in rather punishing gameplay, as it's hard to tell if you're putting yourself in a dangerous position until it's too late. I did make it out, though, so it wasn't too difficult. Overall, I thought it was nice.

Thanks! and I do agree, on the second day I kinda realized that the stopping mechanic would be more of a pain that something interesting. I wasnt to sure how well the maze would turn out, I had an original idea of making the game be kinda room based but scrapped it because I though horror would work better in a maze. Thank you so much for your feedback

Nice little game, but it's kinda hard. As many others I didn't take the chance to find an exit after multiple deaths. The atmosphere is really nice though!

Thanks! and yeah, kinda noticed that the difficulty  is a bit high. Difficulty is something I am terrible at in gamejams, I alawys get nervous last minute and over compensate the difficulty because I, the one who memorized the ai and have been playing it for 2 days straight, found it easy. Thanks for the feedback

Kinda freaky doe. I couldn't bother to get anywhere but it has promise.

I love the mood and the atmosphere, you managed to make the game genuinely scary with a few simple tricks, that is strong game design. I also love how the game just goes black and quiet when you get caught. I couldn't find an exit so I ended up giving after a while.

Thanks you very much, that is pretty high praise and I appreciate it. I handled the death that way because I really didn't want jump-scares and thought it would be more unnerving not know what happened for sure, kinda based off of waking up from a bad dream. Thanks again

Great atmosphere! I didn't find the finish, but I did get startled when an shadow from a while back suddenly found me again!

I tried to play it very safe and wait very early and not harass any shadows, but I could never really outrun them or find the exit.

Submitted
Take One For The Theme
LikeReply
ilPrinniDeveloper2 years ago

Thanks! I may have overtuned the speed of the monsters, during the jam I was starting to get worried that they were to slow since I could lose them with ease, mainly because I knew exactly how the AI worked, I really should be more warry of over tuning haha, Thank you for the feedback

Horror works extremely well with this theme! Even though I wasn't sure what my objective was exactly, I enjoyed this game, and it was actually scary to experience.

I was kind of expecting the tiles to pop up when the ticking stopped, like as a defense mechanism from the monsters. But overall this was an enjoyable, scary game!

Thank you! and yeah I really should have made the objective more clear, that would probably have made things smoother. Thanks for the feedback

The gameplay was enjoyable, love the art styles and atmosphere a lot

Thanks! the art turned out better than I thought it would.

Despite the use of pre-existing art and music, I think the game was fun and enjoyable.

It is indeed very spooky and tense, well done!

Thank you! Im glad I got the spookyness

LikeReply
Kira (aka Kiraroci)Submitted2 years ago(+1)

Very tense, claustrophobic feel.  Everything goes so still when time stops. I like how the ticking changes intensity it's a nice touch.

thanks! I'm glad I could hit the feelings I was aiming for.

Love the drawings, the music, and the game play. Everything fits together so well. I also like the fact that the ticking makes the game scary, but that you also want the clock to tick. Best of luck in the GMTK game jam!

Very nicely done! Follows the theme and is a bit scary too!

This is creepy. That you can hear your time running out makes it more intense.

Submitted
Curse of the Cursor
LikeReply
ilPrinniDeveloper2 years ago

Haha Thanks! the ticking sound turned out alot better than I expected it to initially