Top-down game where only one thing is visible on the screen!
Submitted by LudosGD (@LudosGD) — 1 day, 12 hours before the deadline
Add to collection 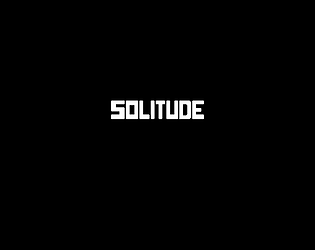 Thank you! I'm happy the design is delivering. Making sure your game is simple to understand is important, because the player has more time to focus on actually enjoying the experience rather than learning how the game works.

Very simple and addictive game! I liked it!

I played this yesterday and had my coworkers at the office play it too but I forgot come back and rate it :b

The game is quite fun and original and I was honestly very impressed.

Good job guys this is quite amazing!

Hey, we made a godot game too. Check it out!

Submitted
Lurking in the Dark
LikeReply
LudosGDDeveloper1 year ago

Thanks for the kind words! I'm happy you all liked it!

I'll surely check out your game! ^^

Excellent idea and implementation.
However, spamming wasd should be toned down to avoid epilepsy causing flashes imo.

Thank you! Yeah, I'll think a way to tone it down and implement it after the jam. Thanks for the feedback!

Nice usage of theme! I ended up just spamming W-A-S-D to get by but still ended up enjoying it quite a bit :~)

Thank you! Happy you enjoyed it!

Great idea and clever implementation. Didn't know how deeply I'm in love with corners - missed them wholeheartedly throughout this game. ;) Love the selection of sound effects (especially the wall bump) and music and (though very minimal) like the art style, with the eyes slightly moving depending on the direction. Only wish there would be more levels. But I guess that's a good sign. :D

My godot game: https://njamster.itch.io/wonkey (playable in browser, not mobile friendly)

Thank you very much! I wish there were more levels too. Maybe after the jam... :)

Creative game concept, the controls are smooth, and fun to play! I was trying to see continuously by furiously tapping WASD to map out an area, sonar style... but it still requires some spatial awareness, and concentration! haha! Thanks for the explanation below about how you made the game, as a fellow Godot user, it is nice to have a little peek behind the curtain. Well done! :)

Thank you very much! Always happy to help other Godot users, it's the first engine I'm using and learning with regularity and I'm having a blast!

Thank you very much! If your reaction is this, then the game is working as intended :)... Happy you liked it! :D

I think the reveal mechanic could be improved, but once I got the thought process behind it (one object shown) it was really quite engaging. Nice job.

Thank you! I would love to work a bit more on the game and polish the mechanics!

I think you hit the "only one" theme 100%! Really clever Idea, one of the best entries I've played so far!

Submitted
The Journey of a Time Shifter
LikeReply
LudosGDDeveloper1 year ago

Thank you so much! I really wanted to make the theme central to my design and I'm happy you liked it!

Fantastic entry! I love that you can't see yourself, which forces you to flip back and forth between yourself and a direction. There's a massive difficulty ramp on either the 3rd or 4th level (I forget) where it seems like there's a corridor of enemies. I couldn't just walk past, nor could I stop and look for enemies otherwise I kept dying, so I wasn't able to get past that.

I'm curious as to how you implemented what to show in a direction. I would love a basic breakdown if you're willing to divulge.

One tweak I might suggest is to briefly show the enemy that kills you (and hide the player for the theme). It has an ever so slight "cheated" feel to die in that part I mentioned without ever seeing the enemy. It would also make it easier to see how far apart the enemy is from the previous one.

Thank you very much! The difficulty ramp is between the 3rd and the 4th; I planned a level between those two to make the shift less dramatic but I couldn't make it because of the tight timeframe.

Of course I'm willing to divulge, I love talking about these things! I think I used the least elegant solution possible, but basically I gave four 1024-pixels-long raycasts to the player, with directions right, up, left and down. Then to the moving objects (enemies), keys and doors, I gave an additional Area2D with an expanded CollisionShape2D, so the raycasts can collide with these additional areas (in the enemies' case, the areas cover their path), while the player collides only with the physical object. I could go in more detail, but I think a private messaging system would be better (also I would need time to recollect ideas and explain in a decent way the details :'D)

As for the tweak you're suggesting, I don't know why I didn't thought of it before. Thanks for telling me, if you're okay with it, I will update the game with it in the future after the Jam is completely over!

That's a really good solution, far from being the least elegant. After my reply I got to thinking about it and that's exactly how I would've implemented it. Nicely done!

By all means, implement the tweak. :) Glad to be of assistance. I look forward to playing the updated version.

Thanks for the kind words (and for the tweak!) :D

I wasn't able to finish this game due to being it too difficult for me xD, but even with that, I can safely say that this is pretty enjoyable experience.

The graphics are minimalistic, but they get the job down and being able to quickly distinguish different parts of the game really adds to the game and can be the difference between life and death. The theme of the game is really original, interesting and certainly fun, although a little challenging, you really have to check every direction before every step to avoid certain death.

Overall, nicely made and fun to play. Don't know how the game is long considering I didn't finish it, but good job!!!

Thank you! I'm really happy you liked it this much! ^^

I shouldn't tell you, but there are 4 levels. Don't tell anyone I told you!

Cool concept, I really liked how I could move without seeing me, so I had to position myself in the right place, look at the enemy and time it right to get past.

I think I couldn't really think ahead in this game, as I couldn't see as much as I thought I would. I would like this better and would have finished to the end if I could "see" through an enemies path when they weren't there, so for example in the first key level, if I could look right and see the key when the enemy wasn't between me and it. I don't know if that made sense, but I still really like the game!

Don't worry, it makes sense! I had to make a choice early on. If, using your example, the player could see the key when the enemy isn't in between, I thought the player would feel safe to just go right to grab it, when in reality there's this bad boy that could intercept them. This could cause the player to feel the game "isn't fair" and just abandoning it in frustration. So I decided to let the player see the whole enemy's path, so they could deal with it in a "fair" way, even though you're right that this means there's no thinking ahead. This "I don't know what's next" feeling plays well too with the mildly unsettling atmosphere that I was trying to convey.

I'm really happy you liked it! Thanks for playing and giving feedback! :D

At first I kind of thought the same thing, but that's a bit of a double edged sword. If the player can see past an enemies path, then they would have no knowledge of an enemy being there unless they were directly in front of the player, significantly increasing the difficult to a potentially unplayable state, all while making the player feel cheated when they die seemingly randomly.

Thank you! Glad you liked it ^^

Thank you very much! Finding the right execution was difficult, but rewarding!

This was a treat. Never seen anything like this!

Thank you very much! All these comments mean a lot to me!

Very interesting concept, never seen a maze type game like this before.

Thank you very much! It was a real challenge doing it (and making the level design too!)