Hey this looks awesome, any plan for a mac build?

Hi, I just updated the game hopefully to resolve that issue. I believe it is a timing issue related to the time stop curse. Thanks for letting me know!

That game was a huge source of inspiration for this

Do you remember if you picked the time stop curse in that run? I'll take a look later today.

Does the issue happen everytime?

This definitely has potential, hope you decide to continue this idea someday. It could even have a rhythm element or at least a song that plays on the beat of the platforms forming.

Thanks for checking it out! I enjoyed your playthrough

Thank you reporting, it will be in the next patch

Hi thanks for letting me know - I think I fixed the cursor issue. As for the blade spinners, I believe their dash time is normal but at the highest difficulty they just spawn very quickly.

Was fun to watch you two play to the end! Had some good chuckles. Btw, you played the harder version before the order of operations was fixed so extra props!

Wow this is amazing and I never thought of scanning in paper for art in a game. How cool! Also, loved the dry humor language used. Gave me a few good chuckles. Hope for more!

Nice usage of doing multiple things with the same mechanic (grabbing and launching). The humor was awesome and it gave the world a lot of life. Great game overall! Also, UCSD represent ^^ (class of '17 here)

We are considering adding a few more levels for a polished up post-jam build.

Wow a whole page of equations! Well your efforts were worth it - loved the video and glad you managed to beat all the levels.

There is no save feature at this time

Was fun to play a couple of rounds! I would have preferred difficulty in the form of different challenges or maybe having to climb multiple layers at a time as opposed to just speeding up the screen, as it started to hurt my eyes after a certain point. Still, fun overall experience and good arcade game!

Controls weren't the greatest but the idea is awesome! Katamari Asteroids.

The longer it took me to find the right dongle, the funnier this joke got. It's way too real and I love it for it.

This is hilarious and it made my entire day, possibly my week.

Wowie! I can see the Obra Dinn and Papers, Please in this. How exciting.

Beat the game on the third try! Wow, I have so many good things to say about this game. The way that the MP could be used on the map and battle, the healing of MP when you take damage, the creative enemy attacks.. Great job. I hope you continue to make awesome games like this.

Edit: Oh yeah, I noticed one tiny bug - the final boss covers its own dice sometimes.

Hi, is it possible to get a web version of this game? Looks great!

Just to be clear - the section I'm interested in is the "More information" tab on game pages, which do in fact show a round number star score as opposed to an average.

As an example, this game https://laundrybear.itch.io/morticians-tale has a score of 4.6 but when you scroll down and click "More information", it is shown as 5 stars.

I don't love star rating scores but I do think they're better than Steam's recommended versus not recommended system because yes/no isn't granular enough.

Hi - I was thinking that it would be nice to have star scores on games in the "More information" tab that aren't just whole numbers like 4.0 stars or 5.0 stars.

As an example, my most recent game https://jontopielski.itch.io/into-the-deep-web hovers right in the middle at 4.5 stars. It is currently shown as 4.0 stars but if someone rates it 5.0 stars right now, it will jump to a 5.0 star rating. It would be nice to just see 4.5 or 4.6 or whatever the score actually is. 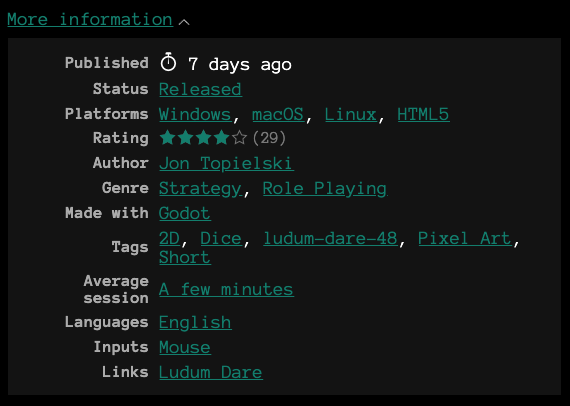 I noticed that itch does show inbetween star scores on other places in the site, such as the "Top Rated" section. 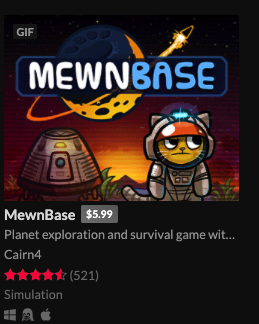 Would be curious to hear what others think, but I think this would be good for the site!

so cool to see someone play it! thank you! i'm happy you understood the message at the end :)

thanks! hope you're doing well :D

Yeah that's the Yume Nikki easter egg. The bed belongs to that creature. There's nothing more.

Did you toggle the lamp several times?

Cute game! I enjoyed the SFX and the fact that your outfit changed each time.

Andyman!! Thanks for playing! :D