A Third-Person RPG which doesn't have guns.
Submitted by GamerKing885, og.creations, alexkarate — 20 minutes, 41 seconds before the deadline
Add to collection 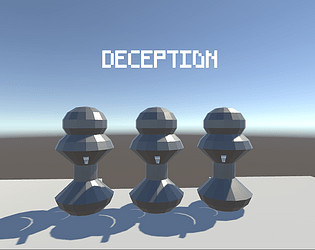 I get that the controls were wrong, but with that many controls and functions for this game, it was too much to remember.

While the ideas for the game aren't bad, it definitely needs a lot of polish.

All right, let me start off by that this game is way too confusing. The controls screen says that "s to move forward" but its actually w to move forward.. hmmmm.. the UI is cool thought. Not much graphics huh? Just some pawn looking enemy's that shoot red balls lmao. And i couldn't even pick up a gun to shoot ;( The game doesn't fit the jam and its kinda boring to play. I don't know if it was the tutorial i just played or a level or something. I don't think this game needed a week to make tbh, but good try! I don't wanna diss your game anymore than i've already done. Hope you keep this in mind and not get discouraged. Kudos!

Uh, the Jam's theme was "The game is a liar",  and this was my take on it... (All the controls are wrong). If you want, though, I can give you the list of controls.

Hmmmmm.. alright fair enough, but that still doesn't cut it.

What could've been made better?

Nothing just not the most original take tbh.

The graphics were bad because our 3D modeller ditched us in between...

played and rated yours! I really enjoyed! Very fun game and good concept!

I'm pretty impressed with the features you were able to get done, the jetpack and shooting actually felt pretty good and the guns even had nice kickback.

rate it if you can i've rated yours!

Cool concept! I had some fun with it. For some reason, moving the view around was extremely slow, so I had to lift up my mouse a lot of times to adjust. Other than that, good job!

First shooting game I played in this jam. I enjoyed it alot :-)

Great job on that shooting system! I enjoyed it.

You'd made a pretty detailed shooting system. The fire impulse on the gun is really nice, although you didn't make the reload. The controls of the movement is smooth. Good job.

Have a look on my game, if you still have time.

Submitted
Don't Spend All Your Coins
LikeReply
sashbrosSubmitted1 year ago(+1)

Nothing from the asset store is used!

Nice Work on the game :)

The game feels really nice to play, but i think it could use more polish, great job :D

Fun game! At times I had a glitch where I could not equip the gun :( but great concept

the game was really great, i don't know how you did it so fast! I just didn't understand what it was like to do at the construction stage!

It's surprising how many mechanics y'all were able to script together in such a short time!  I dig the music.  It's got good energy.  I don't understand though, in the description it said this game had no violence but the first thing we do is run to a pistol, equip it... lol.  Anyway, rated!

Being able to work solely on programming (even if I had to do some 3d modeling (poorly) at the end) really speeds up scripting time.

3D with recoil and everything, well done for a game jam.

The landing on the platforms felt weird sometimes but overall good game.

I liked that a lot but got a bit of motion sickness from the texts on the screen, i don't know why! xD

Also i couldn't get the uzi or the dual wield...

Respect for making a 3D game with guns in the week!

All the controls are wrong, to equip it's E and to dual-wield, it's F.

Fun platforming. Got stuck a few times, but appart from that I had a good time. Hope you're happy with you submission :)

Would love if you played and rated our game too! Thanks!

Cool game prototype!  With some polish and development could be a great Idea~  I love jet packs! Great job~  Please check out my entry too!