Can you save all the hostages with only a grappling hook and sticky peanut butter sandwich bombs?
Submitted by Lazy Goblins (@LazyGoblins) — 3 hours, 1 minute before the deadline
Add to collection 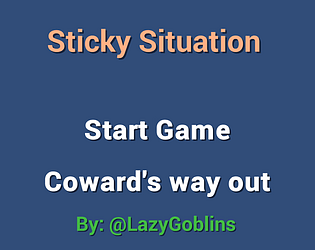 nice use of depth!

The grapple and sticky bombs are nice. Its an interesting 2.5D look where the blocks fall into the front or the back of the main level as well and the music is neat.

Unfortunate that the bombs just go in a linear line, for some reason it really took my by surprise everytime I took a shot

I ended up having a lot of fun with one of the enemies on a platform. I kept planting the bombs on the block underneath them then detonating as they would walk over. It would launch them like crazy. Definitely future potential in the concept! Good stuff.

I like the concept and physics elements, but I really think the bombs should kill the enemies! The aiming was possibly too difficult given the limited lives / overall game play-ability. I really liked the smooth audio. Solid attempt.

The game has a great concept. The main issues i've found is that the mouse cursor doesn't feel like it lines up very well and it's not quite clear that your suppose to use the blocks to kill them(I kept firing sticky bombs at the enemy) . With a bit more time in the oven this has the potential to be something super cool. Def recommend trying some stuff with the rigibodies. There's alot of cool functions there that might help.

I really like this concept! I agree with some of the other comments that the sticky peanut butter sandwich bomb could be a different color to stand out better. and that maybe the falling blocks should be locked into the z-axis, a few times I thought I would hit the bad guy and it would fall past him, but that's really it.

Really great job on this one guys! (I probably should have watched the video first because I spent far too long trying to kill that first guy with the bomb itself!)

I liked the destruction of the environment as part of the gameplay. It wasn't clear that you would grapple the ceiling and the sticky bomb Sprite is a little small to see, and could be a different color to help visually identify it like your grapple hook is purple. Good work!

Cool use of the environment for gameplay. The 2.5D look is pleasant.

What's up Lazy Goblins!!  Yours is the first game I've played so far and I recorded myself playing.  The video is like 20 minutes long and I want to edit them so I can put together a little Let's Play Shenanijam (only not live) lol but if you want the raw video to see someone play your game just let me know and I'll get it o you.  As far as your game goes.... you had me "hooked" (see what I did there).  It was very satisfying to get the mechanics down... like aiming the grappling gun and knowing when and where to shoot the sandwich and then blow it up.  The hard part was the randomness of when the baddies die.  It is physics based so I know there are a lot of variables that play into it (like if the baddie is touching a wall, how hard or fast the explosion hits and if there are any forces going against it but all that stuff made it hard for me to get better at the game.  I could be wrong and I'm just terrible but all in all I enjoyed playing the game.  How many levels are there?

Interesting concept, I like it. Blocks could be locked to the Z-axis with constraints for better gameplay(making it a bit easier to kill the enemies), but I did like how it looked when they fell off the landscape.