Nice xmas game!  I like how it gets frantic as toys spill all over the place.  Good job!

Love the attention to detail, these eyes following the cursor are pretty sweet :)  Nicely polished!

Thanks a bunch, glad you enjoyed it!  I see on your page you did a jam for blackthornprod - I really like the stuff he does, didn't know he was organising jams!  Good space jumping/shootinh game btw, I enjoyed it!  I'll check out maintenance chaos, looks sweet!

Thanks a bunch!  The red triangles restore your health, but it's only obvious once you spotted your triangle goes darker to show your health - I went minimalist with the UI.

Agree - the speed boost definitely only make things harder, but it's somewhat hard to resist going through them :)  I must admit I didn't have a lot of time to balance the game as I crammed the  jam in one evening, so tweaked until it felt fun and moved on to polish things off.  Room for improvement!

Haha thanks, I got Jump Jolt done in 48hrs last year - theme sticky justice :)  It's a tat more polished and has more meat to the gameplay!

thanks a bunch, much appreciated!

haha thanks! I just moved home and knew I  had a busy weekend ahead, so all had to be done Friday evening! Hence the barebone gameplay :)

What bytepen said ;)  I went very minimalistic due to lack of time.  Thanks for trying the game! 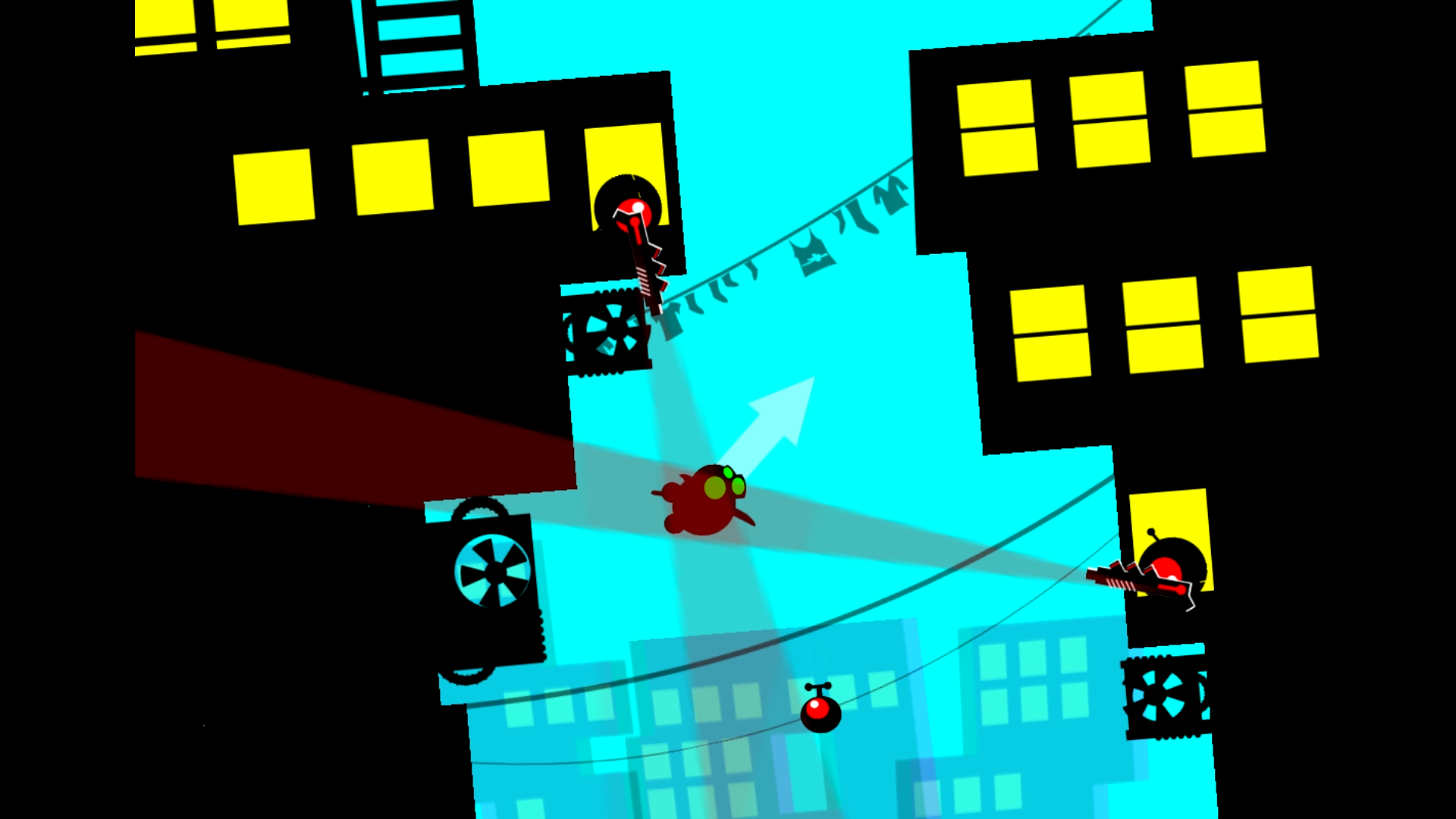 I'm keen to see more people give a try at my latest game Jump Jolt!  Not a RPG, but it's silly, frantic, and short play time :)

Hope you give it a try and enjoy it.  Feedback would be much appreciated too!

Reply
itch.io Community » General » General Discussion · Replied to pragmaticus in My first week on itch.io with LandR
Mitron4 years ago

Nope, no following.  I posted on Release Announcement and the post got picked up by leafo - I guess I lucked out!

Itch.io guidelines advise to give that all important announcement post some love.  Back then I made a point of showcasing the game by having a cool looking GIF - something with a bang, must have been catchy enough!

I wrote a few devblogs on my website that cover the journey of Holey Suit on both itch.io and Gamejolt from a marketing perspective, if you fancy a longer read!

Here's how my most recent game Jump Jolt is doing in its first week:

As your game Landr, the spike is very much down to being listed in the fresh section on the front page for a bit.  The downward trend correlates with the game gradually disappearing from the front page.

It's interesting to compare the trend with my previous game Holey Suit, which I released over a year ago.  That time round I got a feature spot, so the effect is a bit more prolonged as it took a while for the game to completely move off the home page.

Something further I can share, is how Holey Suit did since its release - over a year!

Basically it had a good run, and I was lucky to get that feature spot.  However don't expect your game to stay in the limelight very long!  Past the initial boost, being featured or listed in new/fresh, seldom few users will stumble across your title.  Obscurity is the norm.

Twitter promotion has always worked moderately, but the impact is negligible compared to a feature / appearing on the front page.  Truth is there are a lot of titles released each day, so it's a battle to get up the pecking order - but it definitely yields the most impact.

My two unsolicited cents: I guess a HTML5 port would work on Linux too? It also works on mobile so makes for a cheap iOS/Android port ;)

Thanks a bunch for posting this!  I've had moderate success self-promoting on twitter, reddit etc.  Reddit definitely reaches an audience, if you post something that catches people' attention.  #screenshotsaturday generally seems the most successful tag when I post screenshots or GIFs of my games.  I use Game Maker and YoYoGames tends to post every saturday asking what people have done that week, it's a good place to post your screenshot saturday (if you use Game Maker that is!)

Otherwise itch.io has a dedicated announcement section: https://itch.io/board/10022/release-announcements - the moderators on itch check these posts regularly and if you luck out, you can get a feature spot.  From my experience being on the front page has the most definite impact, so make sure you polish your announcement!  I tend to follow the guidelines to the letter with description, GIF, screenshots etc.  Here's an example with my latest game.

Dev logs work too, if you make a major update or launch post.  Check out that post from the itch creators:  https://itch.io/updates/devlogs-post-types-enhanced-browsing-and-more.  Check out the "A New System For Updated Games" section.  Definitely worth keeping in mind!

Just to let y'all know my game Jump Jolt is now playable in-browser thanks to the might of HTML5!

What is Jump jolt?

Jump Jolt is a frantic wall-jumping / parkour game, where your hero (a sticky vigilante covered in duck tape) climbs up buildings by throwing himself from wall to wall to save the city from a robotic invasion!  Avoid deadly flying bombs and sniper lasers, and make it to the top to sound the alarm!

The journey so far

The game humbly originates from the Shenanijam 2018, where it ranked #5!  A few month later, a polished version of the game with better graphics & balance was released.  The game was also pushed out to Android!  One thing was still missing though: reach as large an audience as possible here on itch.io.  Hence moving the game to HTML5, which makes the game accessible through a range of devices and computers, as well as being directly playable through a browser - no install required!

A GIF is worth a thousand words:

And a handful of promo screenshots I put together: 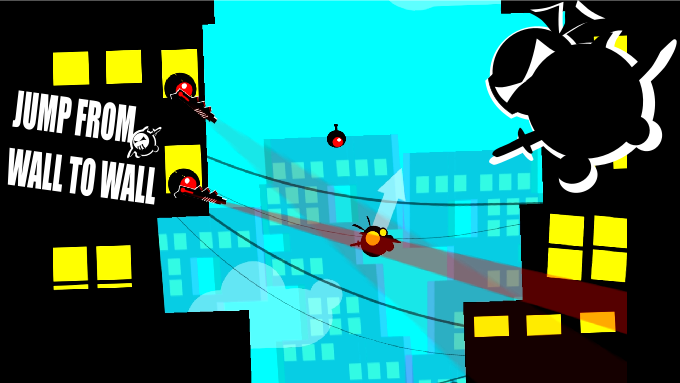 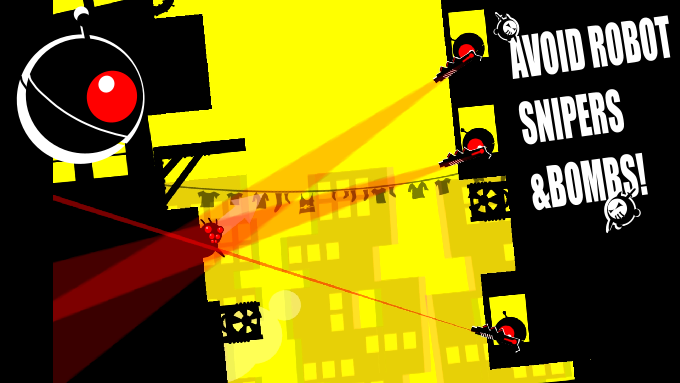 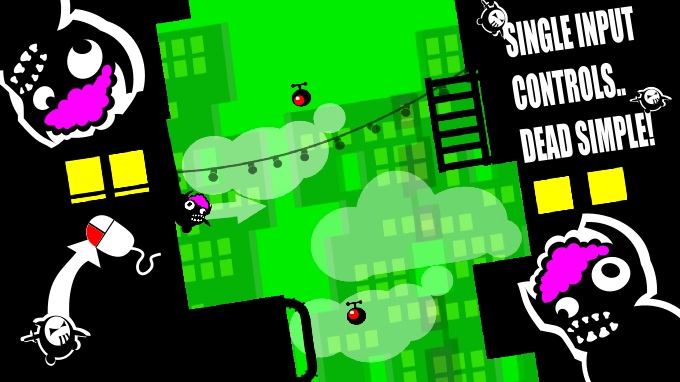 And I went all steam ahead and revamped my Major Update post accordingly, with a story to explain the journey from jam entry to polished game.  Hopefully it gets noticed :)

Oh right, I visibly did a poor job with my Major Update post last week then!

Do "Tutorials" posts also contribute to the freshness of your games?  I'm working on a Thumbnail/GIF tutorial at the moment.  Just curious if that contributes in any way towards creeping up the New & Popular page.  Obviously that'd be a nice incentive for devs that want to share tricks with the community whilst raising awareness of their games.

I forget to mention - JumpJolt is also available on the Google Play Store!

Link on the game page!

Haha thanks that was fun to watch, nice work getting that high!  Goddam Snippers' ;)

Quick suggestion:  would it be possible to reset the Published date of a submission when changing from "In Development" or "Prototype" to "Released"?

After polishing off one of my previous jam entries and proudly re-releasing the game again yesterday...  Flip, flop.  No views or downloads boost.  I realised it is not benefiting from the presence new entries get, being propelled to the top of the New Releases page.

I suppose it's always possible to delete the submission and resubmit the game afresh (I have  seen others blatantly do it), but since the game originated from a jam I'm keen to keep that link alive (it did pretty well and ranked #5 which I'm rather proud of).  That and of course any previous comments posted on the game page etc.  Outside of a jam entry context, I guess the same would apply to a game that has been Under Development for a while, and finally hits that stage where it's past beta and officially ready.

Just a though!  Any little helps..

I thought I'd add my two-cents as I also recently had to fill in the tax questionnaire (I decided to start accepting donations).  I am individual from the UK, so obviously this does not address the German side of things, but might be useful to anyone going through these gruelling questions!

Same comment on the ITIN as pointed out by Wend1go.  TIN stands for Tax Identification Number and the questionnaire accepts your local country tax code.  In my case in the UK, this was my UTR (Unique Tax Reference).

Re-declaring income, I believe things work the sort of the same in the UK as Germany.  Assuming you are employed and game making is a hobby, there is a tax exemption for additional income made from side activities.  Best to check with an actual accountant, but anything under a thousand pound should be tax-free.  In my case I actually created a LLC with its own UTR.  I am self-employed and planning to have game development as a secondary income stream, so this made more sense for my situation (but was a bit more complex to setup!).

On a side note, I'd encourage anyone planning to actually selling game to set up a LLC, as it protects you as an individual.  Chances are very low, but some AAA company could decide to sue you for copyright infringement or whatnot (happened to notch in the early days of Mojang), so it's better they sue your company - not you!

The game is still all about wall jumping parkour style.  You play a sticky vigilante covered in duck tape throwing himself from wall to wall.  Avoid robot bombs and lasers and make it to floor 200 to sound the alarm! 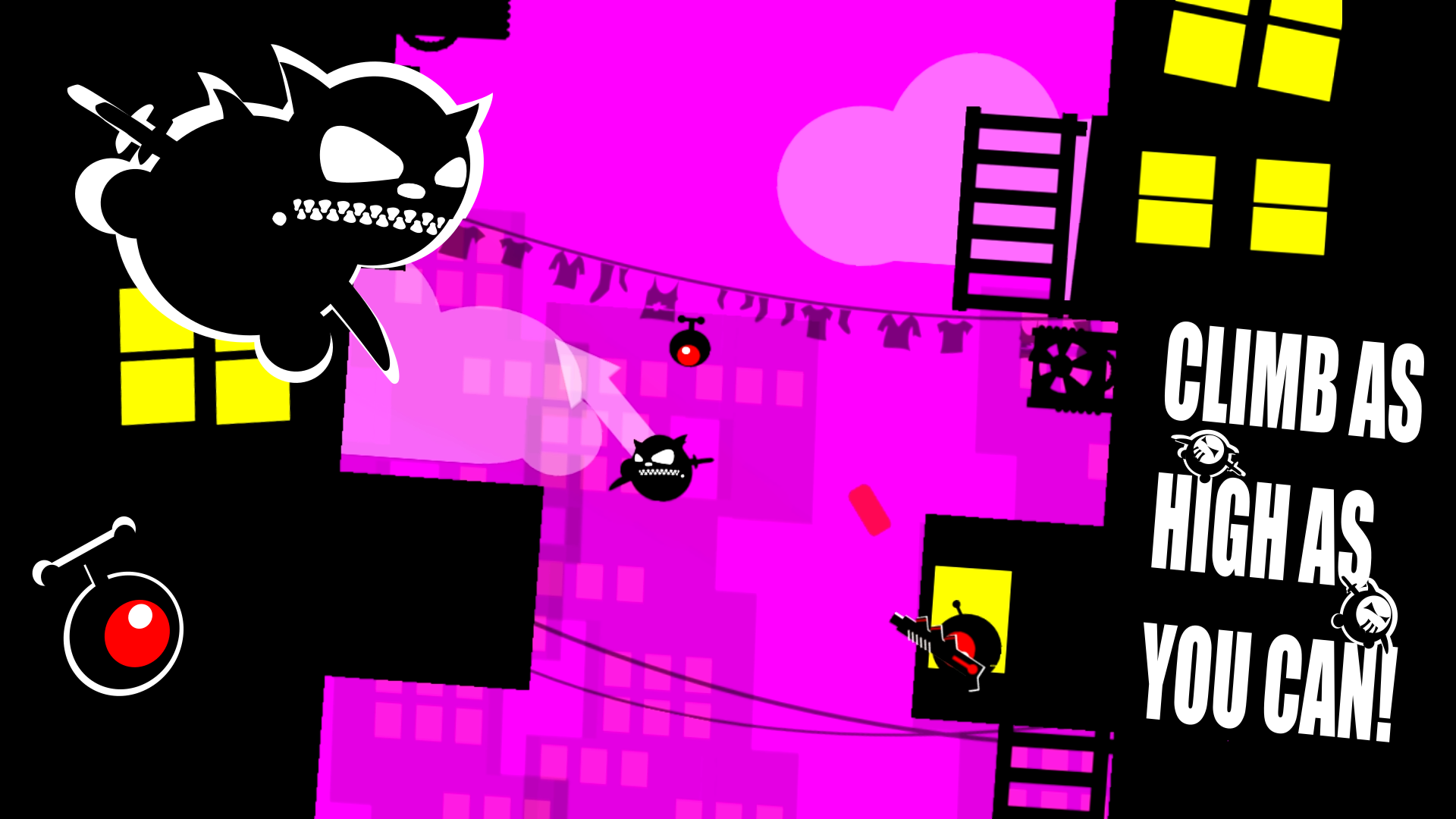 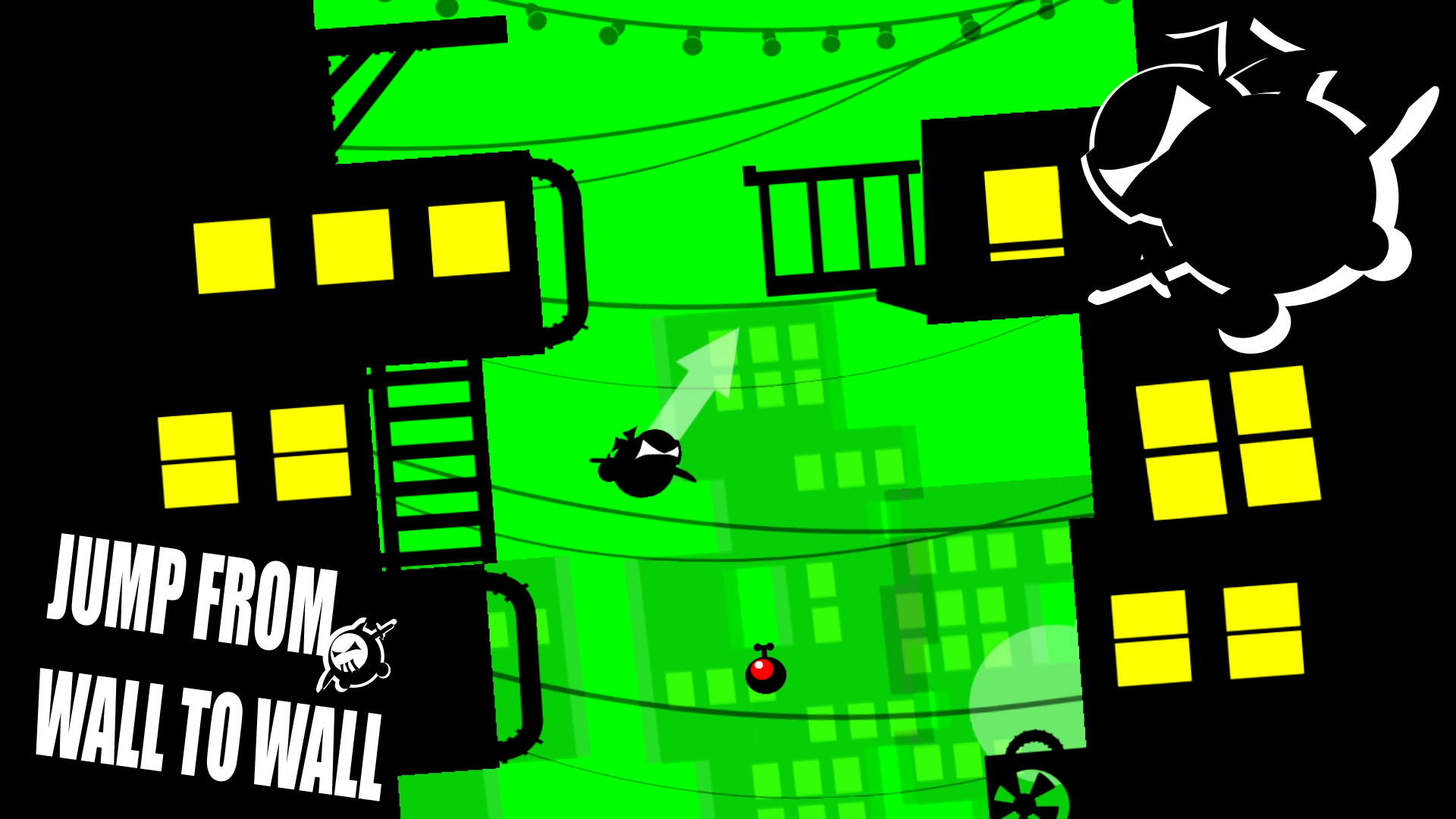 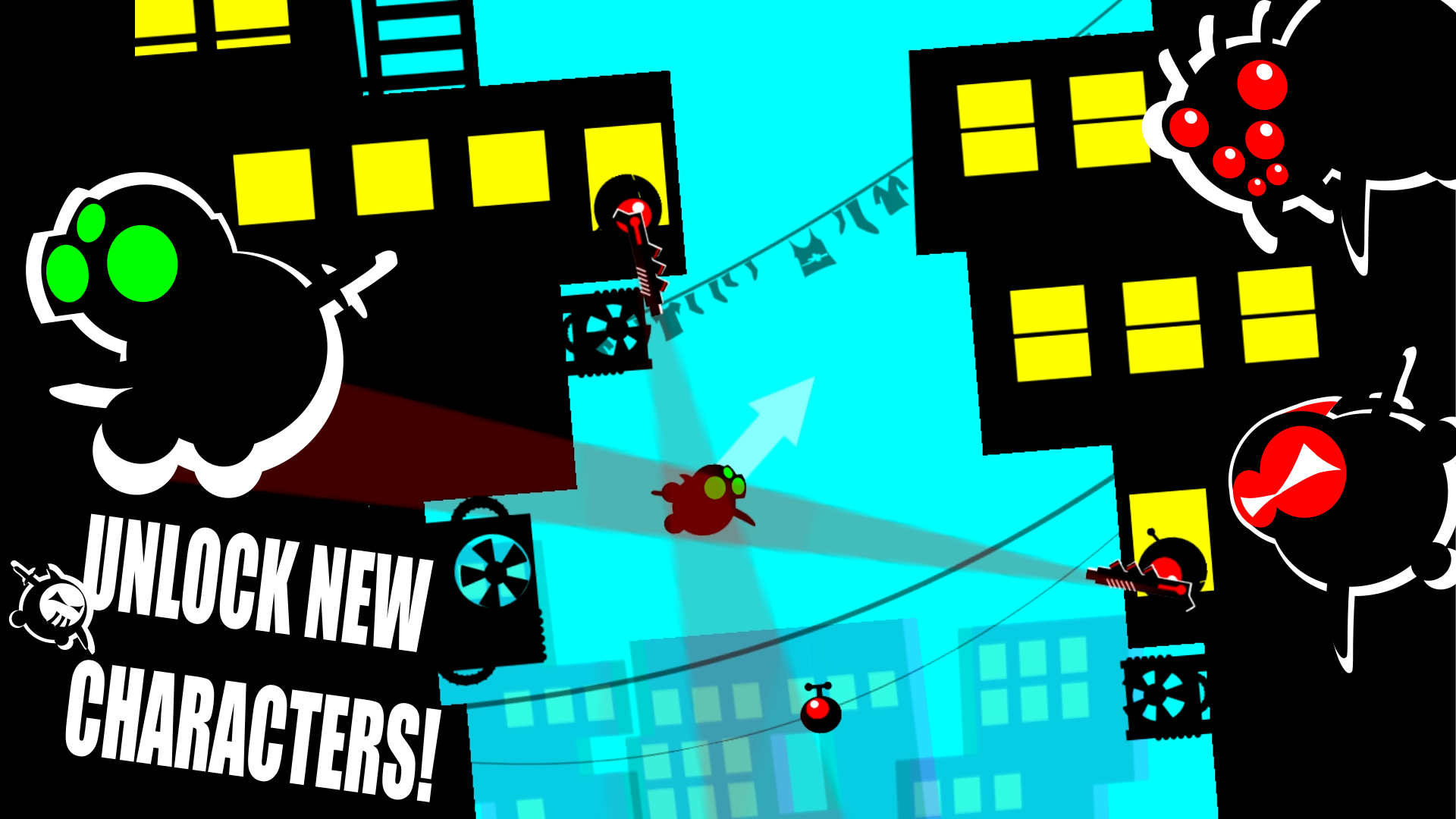 Thanks for posting this, very interesting read!  I really enjoyed your game, happy to see you made it to the top 10!  Can't wait to see the Coster brothers having a go at it in their playthrough video ;)

I also wrote a postmortem - it's not on itch but directly on my website if you fancy the read!  https://hotchpotch.games/shenanijam-postmortem

Thanks!  Yup I kept the jam version quite hard, but working on an "official" version which I'll roll out once the jam rating period is over.  The new version has two difficulty modes, in the easier mode the bomb moves slower and is easier to avoid, but still adds a bit of time pressure so player can't camp in a corner indefinitely ;)

Thanks!  That twitter button was a last minute addition, it's a bit ropy but makes up for the game not having a leader board :)

Thanks, much appreciated!  Yup, fixing bugs,  polishing the game off & working on an Android port.  My plan is to keep the gameplay lean and simple as it is now, but any suggestions are welcome ;)

Haha thanks!  Sorry I like my games a bit challenging!  Although I try my best to make sure that they are hard, but not unfair ;)

Thanks, much appreciated!  Yup there are a few bugs & the game needs a bit of extra love, I'm planning to work a bit more on it after the jam.  Bat outfit should come up randomly, but the calculation is a bit ropy & random so it might take a few times before it appears!

Thanks for the feedback, I'll have a look at tuning this down.  Last thing I want is people to be sick on their keyboard ;)

Thanks!  Yup I'm debating porting to Android, although I tested on a tablet and it's a bit fiddly with touch control.  Need to give it some more thought!

Poofs, temporary changing the enemies to white when they get hit + some screenshake would definitely add some juice ;)

If you haven't watched it yet, this is my go-to video for any platformer/shooter design - definitely recommended!

Thanks!  Once you reach floor 50 you get access to yellow/blue/green backgrounds for a bit more variety.  I'm currently working to see if I can get this to work nicely on touchscreen.  If I can pull this off I' m definitely thinking of an Android version!

Haha, thanks!  Yeah the game is pretty much balanced to enrage players :)

Those poor keyboards!  I recently played Track And Field at an arcade museum, you can't beat the physicality of these smahin' button games ;)